The tip of Casey Weismantel’s rod slowly moved downward and as he set the hook; it was obvious what had taken his bait, was not a small fish.

As the fish took line, it was obvious Casey was going to need some help landing this fish. One of the guides, Jeff Arneson quickly slid across the ice to lend a hand. As Casey worked the fish up into the hole, Jeff reached down into the cold water, bringing the big walleye out onto the ice.

The fish, a twenty-three incher wouldn’t spend much time out of the water, just enough time for a couple of photos and then released back into the water. This fish would be the first of numerous big fish caught on this trip into northeast South Dakota.

Our Team would be headquartered out of Hidden Hill Lodge located on one of the glacial lakes outside of Aberdeen, S.D. Our film crew was there at the invitation of South Dakota Tourism, HuntFishSD.com and Glacial Lakes & Prairies Tourism.

Hidden Hill, is a picturesque lodge, serves excellent meals with room for thirty-four people, it lies adjacent to its four hundred-private acre lake that has an excellent populations of walleye, perch, crappie and bass. www.hiddenhilllodge.com

On this trip, we would be on the ice with some of the best ice-fishermen, including several members of the Ice Team, Dave, Genz and Thayne Jensen-Clam Outdoors, Tom Zenanko-Vexilar Ice Fishing Today, Jason Mitchell-Jason Mitchell Outdoors-Boomer Stelmach-Heres My Gear & The 4 Outdoorsmen radio,  Dennis Foster- Eye Time Promotions and others.

Many of these lakes may be some of the best-kept secrets in the state, ranging in size from eight to 10,000 acres, many of which are no name lakes, once just small sloughs that have increased in size.

Some of the more popular Glacial lakes in the area include, Bitter, Waubay, Enemy Swim, Reetz, Grass, Pickerel, Lynn and Enemy Swim all known for their excellent walleye and perch  populations and the home of tremendous populations of big crappies, smallmouth bass, bluegill and northern pike.

Our mornings started early and after a hearty breakfast at the lodge, plans were made on how to fish the lakes. Because of the number of anglers, we would split into smaller groups, allowing us to go in different directions and fish several different lakes and sloughs. 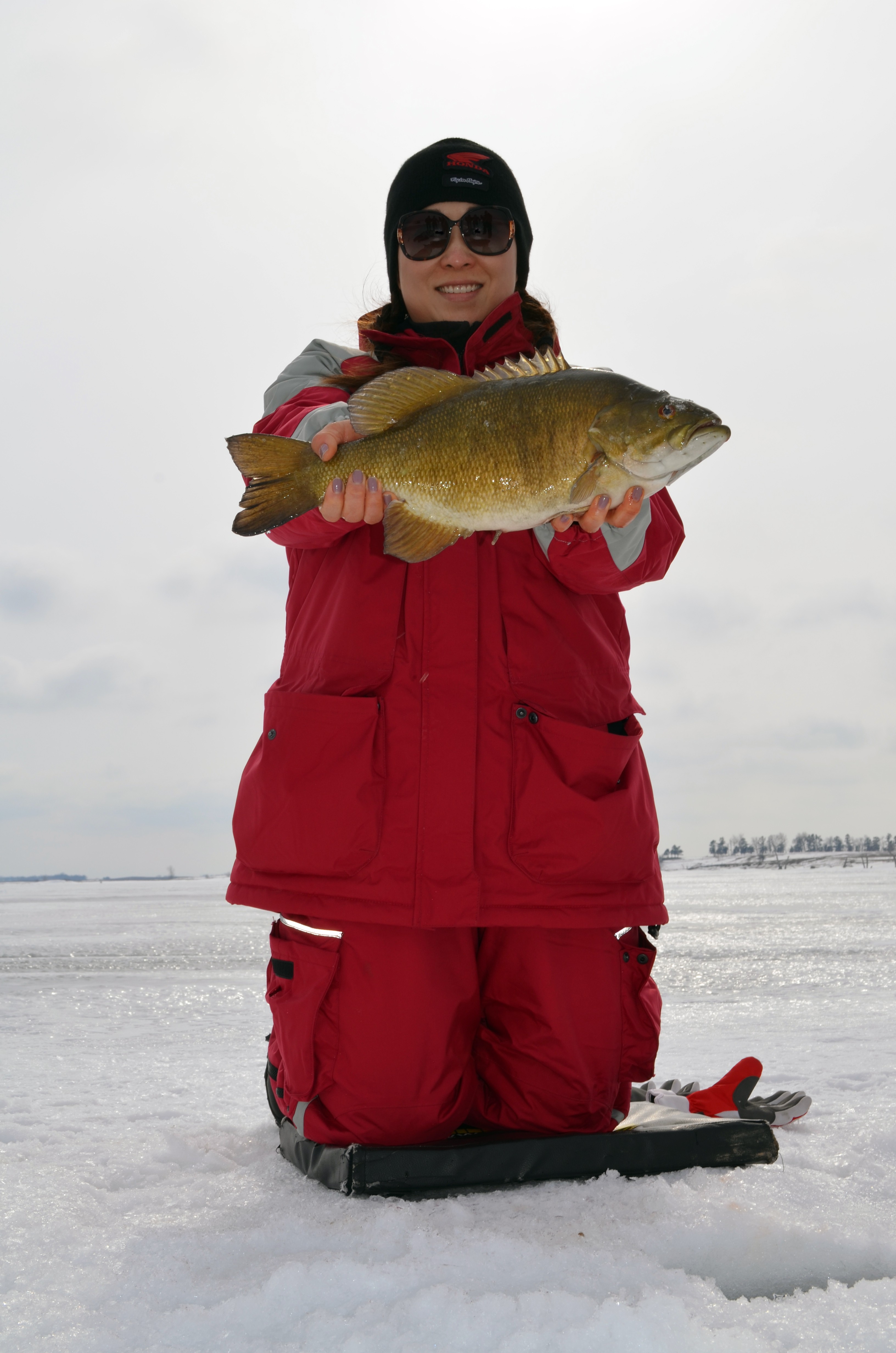 Susie Han, California with a big smallmouth bass taken while ice fishing in the Glacial Lakes of South Dakota. (Photo courtesy of the Outdoor Forum)

My group would start fishing on the private lake at the lodge, where on a previous trip we had caught a number of big walleyes and perch.

Casey was the first to connect and put a fish on the ice when he landed a fat twenty-three inch fish. Not to be outdone, Tom Zenanko set the hook on a larger twenty-five inch walleye, then Thayne Jensen iced a healthy twenty-inch walleye.

During our two days at the lodge, we jumped from lake to lake, taking advantage of the best bite and different species of fish, on one of the lakes, I landed a good ten and a half inch  crappie using a livebait rig.

While we fished for walleye and crappie, another group hit one of the nearby lakes and was able to take some big perch in the one-pound class.

Our third group of anglers, which included Susie Han, from California, with Honda Motor Sports  was on her first ice-fishing trip who caught the big smallmouth bass of the trip. Their group, using a combination of jigging and tip-ups also took some huge walleye and northern pike.

This area, northeastern South Dakota, the area where I was born and raised is a great place to call home and a great place for those of us who love the outdoors.  It has always been the home of some excellent fishing and hunting. When the water levels in the area started to rise, it created lakes from sloughs as well as some of the largest lakes in the state, the fishing went from good to extra ordinary. These lakes could very easily be the location where many of the new South Dakota state records will come from in the future.

If you’re looking for some excellent fishing and hunting, this area has it all, more information on the area and South Dakota is found at http://huntfishsd.com/, www.sdglaciallakes.com and www.travelsouthdakota.com.