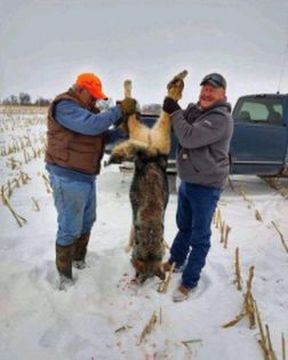 According to an article published by the Associated Press, genetic testing has revealed that coyote hunters shot a gray wolf north of Fremont, Nebraska, in January. The Nebraska Game and Parks Commission reported that the female wolf was killed Jan. 28, 2021, likely a transient animal that originated from the Great Lakes wolf population that resides in Minnesota, Wisconsin and Michigan.

Gray wolves are not typically found in Nebraska, according to Game and Parks, but Nebraska was part of the species’ historic range and habitat in Nebraska could support wolves.

“This is the third confirmed instance of wolf presence in Nebraska since the early 1900s,” said Sam Wilson, NGP Furbearer and Carnivore program manager said in a news release. “Wolves can disperse great distances from their nearest populations in the northern Rocky Mountains or Upper Great Lakes. While we don’t have any evidence of resident wolves or reproduction in Nebraska, we can expect young wolves in search of new territory to cover long distances and make it to Nebraska from time to time.”

This was the second wolf killed in Nebraska in less than three months. In November, a rancher south of Bassett who was out checking on his livestock shot and killed an 81-pound male wolf.

The federal government removed gray wolves from the endangered species list effective January 4, and for Nebraska that delisting made it legal for residents to shoot wolves year-round, same as coyotes. There are currently four distinct populations of gray wolves: Western Great Lakes, Northern Rocky Mountains, Southwest Recovery Area and Alaska. Their total population is approximately 13,380 to16,880 individuals.

← Prev: Spring Shore Fishing Gary Howey Next: Three bass rigs you need to try even if you’re a walleye fisherman By Larry Myhre →