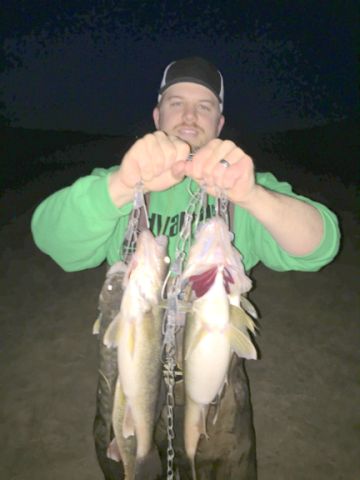 There’s times, when fishing early spring, the bite is best when fishing along the shallower shoreline that’s received the most sunshine and has warmer water temperatures. Team Outdoorsmen Productions member Andy Turbach formerly of Yankton, S.D. now a Watertown resident took these walleyes from shore on one of the numerous Glacial Lakes around Watertown, S.D.

All anglers, including myself, began their journey to their love of fishing along a shoreline on some pond, river, or lake.

Much of the same information on fishing from boats is similar for those fishing from shore as the fish are relating to the same type of current breaks and structure.

In late fall, walleyes have moved upstream in preparation of the spawn, until their path is blocked by a dam, rapids or other obstructions.

The early spring fishing starts as the ice, melting snow and frozen ground goes away with the runoff the water making its way into the river system, increasing the current, with fish moving into the current breaks; points, areas where water comes in from streams and creeks, wing dams as well as other calmer water locations.

All species of fish, as the ice goes out and water levels rise, will search out calmer water areas and as long as there’s higher water flows, stay there until water levels normalize.

As water levels normalize the fish will move into the deeper water, waiting for the water temperatures to warm up as the spawn begins.

Once the waters warm, they’ll move into their spawning area, those with gravel or with a small rocky-bottom, these locations need to have some current or wave action in order to aerate the walleye eggs.

On larger bodies of water spawning may be on reefs, gravelly beach fronts or those with shoreline protection as these rough uneven bottoms, giving the fertilized eggs some protection from other predator species.

As mentioned before, your more aggressive fish will locate on the outside edge of these current breaks as the food coming downstream into the break will come in along the outside edge, with the fish ready to dash out into the current, grab a quick meal, only to slide back into the calmer water to digest their catch, waiting for their next meal to float by.

Walleyes, with their excellent vision are able to find a meal in the muddiest of water, but you can’t go wrong to brighten up your bait, allowing them to quickly locate your offering, as florescent colors, orange, green and red retain their colors longer and more visible in muddy water.

I’ve often times used a light jig tipped with a minnow, casting up stream along the outside edge of the pocket.

Then letting my bait tick along the bottom until it’s out of the current break, and jigging it back towards the shoreline.

Your bites many times will come as your jig works its way along the outside edge or as you begin retrieving it back to shore.

I’ve also had good luck using florescent Northland Floating Jig Heads above a Northland Roach Walking sinker, with just enough weight to hold it or drift slowly, using too heavy weight may get you hung up on the bottom.

When using this rig, you don’t want to go wild when it comes to having your floater too far off the bottom.

Because the fish are cold blooded, with this being time when fish are inactive, you won’t want to make the fish move too far to reach your bait.

Generally, I have my floating jig head riding thirteen to eighteen inches above my weight, with the current that’s available, moving the bait up and down, giving it some extra action towards the bottom, where the fish are able to zero in it.

On many dams, there’s a wall you can fish off of, like the one at Gavin’s Point, when the gates are open just a little, the water coming out of the gates has a tendency to go out so far and then come back towards the dam, creating a slack water pocket.

A bait option that works in the spring below the dams where there’s slacker water is to cast a minnow, a narrow minnow imitating crank bait downstream beyond the slack water pocket into the current and slowly work it back towards shore, stopping from time to time, allowing the bait to float up, giving fish and opportunity to take the bait.

Fishing off these walls can be accomplished by baiting a jig with a minnow and casting it along the outside edge of the current break, slowly hopping the jig along the bottom back towards you.

Another basic fishing methods is to use crappie rigs baited with minnows and a smaller weight, that with even the slightest current moves it along, keeping your bait from snagging up.

Some folks cast out this rig, letting it settle, then twitching it from time to time, while others basically jig the rig back, bringing their rod up, while reeling up the slack, then lowering the rod, hopping the bait it back along the bottom all the way back to the wall.

Today, according to the Yankton, S.D. Press & Dakotan, water temps are well below spawning temperatures, yet there will still be many of the smaller walleyes willing to bite, you just need to remember that everything this time of the year, needs to be done Slow and Easy, so don’t get in too big of a hurry when it comes to late winter and early spring.

Gary Howey is an award-winning writer, producer, broadcaster, former tournament angler, fishing and hunting guide and in 2017 inducted into the “National Freshwater Fishing Hall of Fame”.   He developed and was the Producer-Host for 23 years of his award winning gary Howey’s Outdoorsmen Adventures television series. He’s the Host of the award-winning Outdoor Adventures radio program carried on Classic Hits 106.3, ESPN Sports Radio 1570 in Southeastern South Dakota, KWYR Country 93 AM and Magic 93 FM in Central South Dakota, As well as on KCHE 92.1 FM in Northwest Iowa.  If you’re looking for more outdoor information, check out www.GaryHowey’soutdoors.com , and www.outdoorsmenadventures.com, with more information on these Facebook pages, Gary Howey, Gary E Howey, Outdoor Adventure Radio, Outdoorsmen Productions and Team Outdoorsmen Productions. The Outdoor Adventures television show is available on numerous Independent markets, and the MIDCO Sports Network.