It started; the other day, when the racket above was not hard to miss, as the skies filled with birds and their high-pitched quacks and the horse honks of Snow goose heading north into the Dakotas.

Snow geese, which migrate in huge flocks are very vocal, when they are close, the racket they make can be deafening, as it seems that every goose in the flock, thousands of them are all carrying on at the same time.

With the warmer weather, causing the snow line to reseed, the older mature birds are making their way north to get the best nesting grounds on the Canadian and Northern Alaskan tundra.

Last week, one of our Team members traveled to Omaha as flock after flock of Snow geese migrated north, with open water along the way holding huge numbers of the geese.

Light or Snow geese; come in two color phases, the white and blue, as the name implies the white phase are pure white with black wing tips while the blues are bluish gray with white heads.

The Snows and Blues are the largest of the species, weighing in at around six pounds while the smaller pure white Ross goose, weighs only about three to four pounds.

Light geese, are migratory waterfowl that spends over half of the year migrating, with some birds migrating over three thousand miles to and from their wintering grounds in the southern United States and Mexico.

In a report released in 1997 by Ducks Unlimited, indicated because of the Snow geese over population, the tundra habitat along seven hundred miles of coastline from the southern James Bay to the west coast of Hudson Bay in Canada destroyed. More than 130,000 of the acres destroyed and similar-sized acres critically damaged that not only affects the Snows, it affects other waterfowl and species.

The Snow goose population is skyrocketing by over five percent each year and a breeding population of the lesser snow geese exceeding over five million birds that is an increase of more than 300% since the mid-1970.

Because of this over-population, the Light Goose Conservation Order special spring season was established to help control them.

Because of this special season, some of the hunting laws for this season changed, those hunting still need to have a legal hunting license in the state they are hunting, with hunters in South Dakota will needing a 2018 Migratory Bird Certification while in Nebraska they will need the  State’s Waterfowl stamp.

The laws that have changed during the spring season include allowing hunters to use electronic calls, have unplugged shotguns, with no daily or possession limit and no Federal Waterfowl Stamp is required.

With the “No” limit, hunters need to be reminded that all game is used and not wasted. If you abandoning, dump or waste game birds you may be subject to fines and restitution.

Because Snows are so leery, they can grow to a ripe old age with banded birds taken that were up to 20 years old. They migrate in huge flocks and are some of the toughest waterfowl in the world to decoy, and call in.

In these flocks, numbering thousands of thousands birds they are always eyeing the ground looking for anything that does not seem right, something that is out of place.

If alerted, older birds will come between birds that are starting to decoy, pushing them away from the hunters and their spread.

Early migrators can be toughest of all Snows to call as their flocks are comprised of the older birds, but after a long flight will be tired and may be looking for a place to rest.

If you are in the right place, have a decent spread and a good call going, chances are that you will have the opportunity to pull a few birds out of the flock. 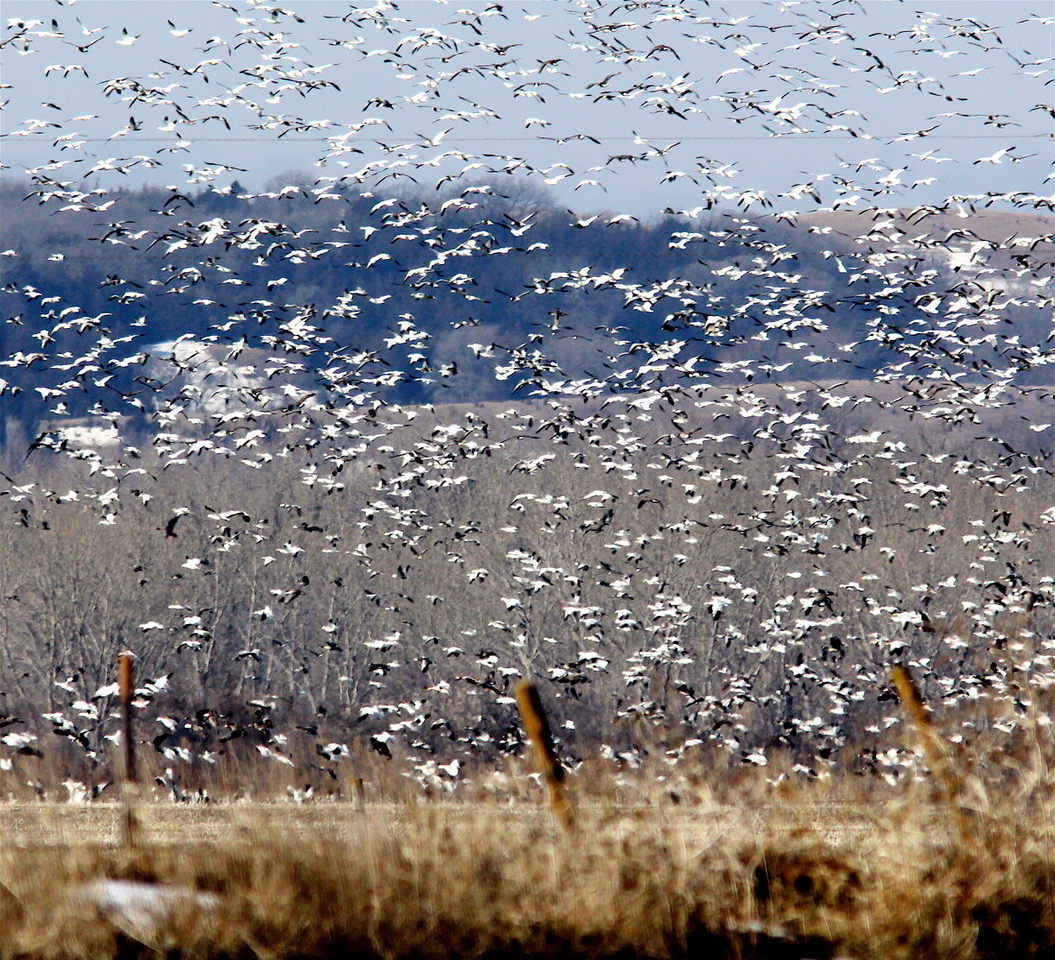 The Snow goose population is skyrocketing by over five percent each year and a breeding population of the lesser snow geese exceeding over five million birds that is an increase of more than 300% since the mid-1970.

It is quite a sight when the birds of a large noisy flock of Snow geese fold their wings and tumble like maple leave down towards your decoys, pulling up, gliding and then tumbling down as they set up on your spread.

It is a numbers game when it comes to hunting Snows, the larger your decoy spread the better.  Because they migrate in huge flocks, you very seldom see just a few birds in the air, as it may be thousands of birds flying overhead and thousands of them on the ground at one time.

You do not need anything fancy as far as decoys go, as hunters in Texas learned years ago that a couple of dozen of decoys and a bunch of white rags or white plastic bags would do the trick.

I like to have a few more decoys than they use as well a bunch of white windsocks to create motion in the spread.

Hunters I have hunted with put out huge spreads, with hundreds of Dakota Decoy full bodies, windsock decoys with a Mojo Lucky Duck to add movement to your spread.

Another way to add movement to your decoys is for your hunters to wear snow camo, which allows the hunters a little more movement when watching the birds. Inexpensive white camo does not need to be fancy, as the whites, a butcher wears works nicely.

Some hunters say Snow geese are not much for table fare, labeling them as Sky Carp, but I have had some excellent Snow butterflied grilled goose breasts and also have had some that left a lot to be desired.

The majority of the Snow goose hunters I know feel that if it is “seasoned” enough and made into jerky Snow geese can be decent eating.

In South Dakota, the Light Goose Conservation Order spring season runs from February 19, 2018 through May 9, 2018.

During the Nebraska Light Goose Conservation Order spring season, hunters will have to go on-line to know what area they will be hunting as the state has three zones; the West, Rainwater and West. All three zones open February 12, with the southern Rainwater basin zone and the West zones closing April 5 while the East zone remains open until April 15.

With the recent blizzard, we may see some of the Snow geese coming back south as any grain that may be on the ground will be under a half foot of fresh snow.

However, do not despair as there are still huge numbers of Snows in Missouri waiting to come north and the later flights will be the younger birds, those that can be easier to decoy.

If you are looking to do some hunting and something to do before the spring turkey season opens, there is a lot of time to hunt the Light Goose Conservation Order spring season, as the season is a long one, over three months.