Ice-out is time for trophy northern pike By Larry Myhre

If your goal is to catch a trophy northern pike, the best time to do it is coming soon.

The big, old females, those 20-pound-plus leviathans, move into shallow bays to spawn even before the ice goes out. By the time the ice leaves the bays, the spawn is usually over, but those hogs stay around, basking in the warmer water those bright, sunny spring days often bring.

And the good news is, they can be caught.

Much of what these big females are foraging on is winter-killed fish that are lying on the bottom. If your lake has shad, the bottom might be littered with dead fish. And big catfish will join northerns in this feeding frenzy. If there are no shad, rest assured there will be other fish offering meals to the cruising northerns.

South Dakota’s massive Oahe Reservoir is a definite destination for early northern pike fishermen. Just about any of the lake’s many shallow bays will offer good fishing.

For years I would make an annual trip to fish with my friend Steve Nelson who lives in Pierre and is definitely one of the best shore fishermen up there.

While you can definitely catch these big fish from a boat, most of the early anglers fish from shore.

As anyone who has spent much time around water knows, the ice leaves the shallow bays first while the main lake remains in an icy grip. So shore fishermen might get as much as two weeks head start on the northerns before the boats can even get there.

Here’s how we would go about it.

Our rods were long and rather heavy. I used the same rods I used for downrigging at the time, eight-and-one-half feet long, medium heavy action. We would attach big spinning reels spooled with 12-pound-test monofilament.

Our terminal tackle consisted of a 12-inch steel leader with a swivel on one end and a snap on the other. Our hook was a size 1 treble. Our bait was frozen smelt which we obtained at local grocery stores or tackle shops.

We preferred to cast our smelt out onto a flat coming off the shoreline.

Here’s the method. Take one of the smelt and insert the shank of the treble hook into it at mid body. Push the shank through and attach the eye of the hook to the snap.

Using a kind of lob cast, throw the rig as far out as you can, making sure the smelt doesn’t fly off. Then let the whole rig sink slowly to the bottom. 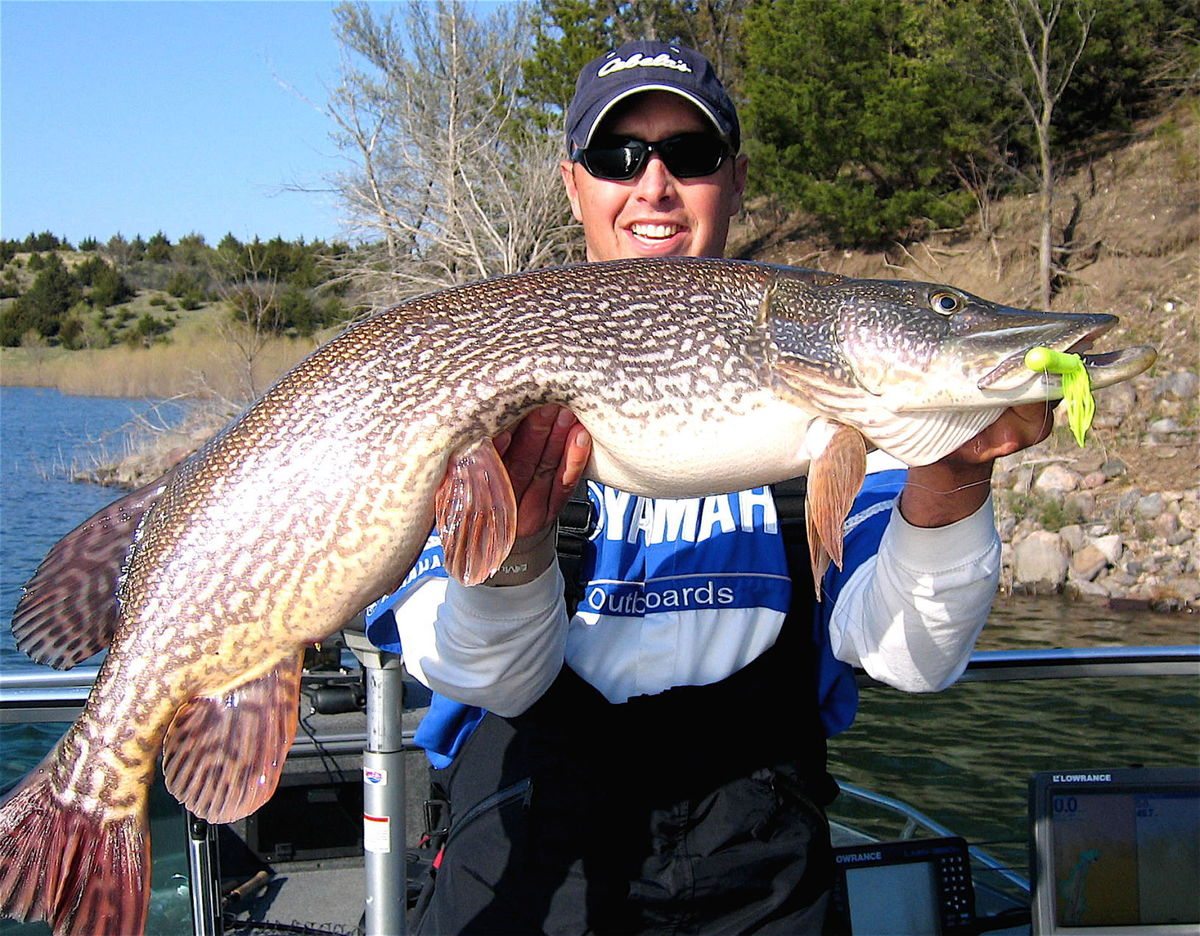 Joel Vasek, Missouri Valley Guide Service, Geddes, SD caught this big northern female right after ice out in a bay on Lake Francis Case using a tube bait. Big northerns are shallow and vulnerable in the early spring. The rest of the year, they just seem to disappear.

Put the rod into a forked stick. Open the bail of the reel and leave it open. Peel off some extra line letting it lay on the ground. Next attach a fairly good-sized, round bobber to the line and leave it on the shore. That is your bite indicator.

Now you just sit back and wait.

When a northern takes the smelt he will make a run, and your bobber will go scooting off the shoreline and into the water. Pick up the rod and wait for the pike to end the run. Then close the bail, take up the slack line and set the hook hard.

As you regain line, have your partner take the bobber off the line and continue fighting the fish.

← Prev: Estelline, SD Reflections Memorial Park Next: It's the little things In fishing By Gary Howey →