In case you haven’t noticed, the spring migration of birds is well underway.

The first of the migrants to move through our area are snow geese. These intrepid travelers leave their wintering grounds, mostly in Texas and begin moving north in February. They fly until they reach snow and then mill around, reluctant to go farther because finding food will be impossible.

If we have an early spring, the snow leaves quickly and so, too, do the snow geese. And they won’t quit flying until they reach their nesting grounds in the Arctic.

Snow geese numbers are so high that they are literally eating themselves out of house and home. The arctic tundra has been decimated by too many geese and that is why the federal government allowed hunting during the spring migration.

Hunting has helped reduce numbers but as the years go by it becomes more and more difficult to lure the geese within range. Snow geese can live over 20 years, and they are not dumb. Most of the snows that are harvested by hunters are young birds. I’ve lain flat in a layout blind while thousands of snow geese mill over our setup. Suddenly a group of five or 10 will drop down in a spiral, losing altitude. Sometimes others break off and try to stop the ones being lured in. Those are the elders trying to stop the youngsters. Sometimes it works, but mostly not.

Sometime after the snow geese leave, the dark geese begin moving through. We’re in the midst of their migration right now. Other waterfowl are also arriving and will do so over the next several weeks.

The traditional harbinger of spring is the robin. They started showing up a couple of weeks ago and now are literally everywhere, hopping their way in the grass looking for food. Robins are short migrants if they migrate at all. They might slide down into southern Iowa or Missouri to spend the winter. They come back pretty early.

While most woodpeckers don’t migrate, the red-headed woodpecker and the northern flicker usually do. But like robins they don’t go very far. In fact, many red heads winter over in our area. Flickers must move far enough south to find food. Unlike other woodpeckers they forage mostly on the ground and mostly they eat ants.

I saw a flicker in my yard about a week ago, so they are back. I’ve also seen mourning doves and grackles.

We feed birds year around. We also provide water. While we don’t live in a particularly good bird area, we have identified 44 different bird species in or from our yard over the years. Of course many of them are not attracted to the bird feeder. We do get a pretty good influx of migrating warblers and other small birds, usually in May.

We provide a variety of different bird foods in various feeders in our backyard, but if you are just beginning I’d recommend sunflower seeds for your first attempt. These seeds will attract a wide variety of birds and are not so attractive to house sparrows as bird food containing millet. That doesn’t mean they won’t show up. They will. And they might just be the most common bird you will have. The next common visitor will probably be house finches. The males of this species look a lot like a sparrow that has been dipped in a red dye. 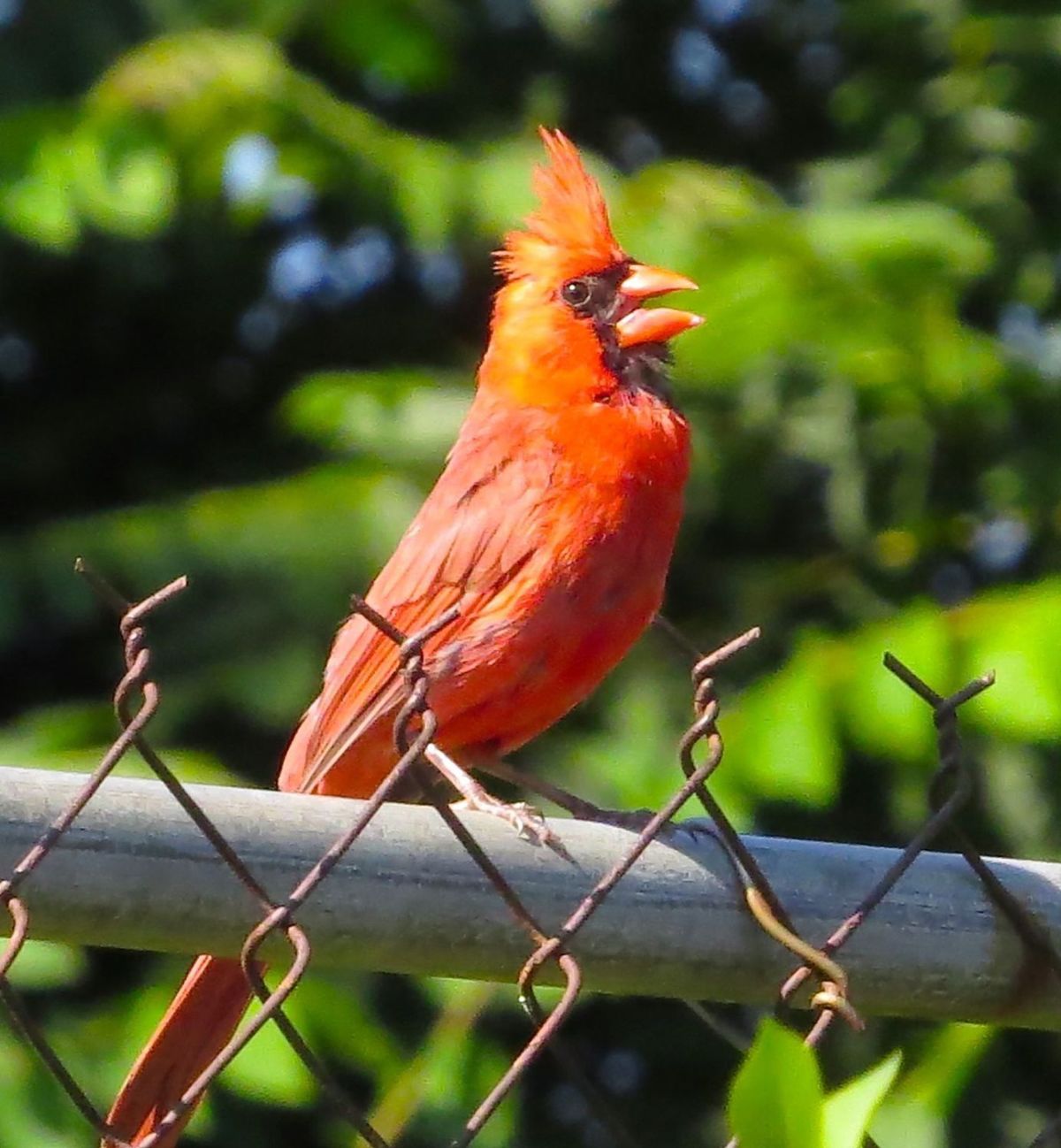 Some of the most common visitors to our sunflower feeders are chickadees, white-breasted nuthatches, mourning doves, cardinals and grackles. We also put out a thistle seed feeder to attract the Iowa state bird, the goldfinch. In late spring and early summer, we put out grape jelly to attract baltimore and orchard orioles. We’ve had as many as a dozen at one time.

A good source of clean water is important to attracting birds, so be sure to add a bird bath.

If you want to attract woodpeckers, put out suet blocks. If the starlings find them, they will clean you out in no time. There isn’t much you can do to prevent that. When that happens I usually wait a couple of weeks before putting out another block. By that time the starlings usually have moved on and will give you at least a few days without them.

Photographing birds is a very enjoyable hobby, and with today’s cameras even an amateur can produce photos as good as a pro.

Most professional bird photographers are armed with 600mm lenses on their DSLR cameras. Those lenses will cost them from 8-to-12 thousand dollars. And their digital single lens reflex cameras will add at least another 2 grand.

So let’s forget that and look at “point and shoot” cameras. Most of the manufacturers of cameras are now making “super zoom” lenses. I have a Canon SX50 and that zoom goes from 24mm to 1,200mm. It is an excellent camera and makes high-quality images. The newer Canon SX60 is not getting very good reviews. I’ve also used a Nikon super zoom which extends to 1,050mm.

These super zooms can be had in the $450 range.

While image stabilization has improved so much that you can now hand hold these cameras and still get a sharp photo (most of the time) when zoomed out, it’s much easier to use them with a monopod or a tripod.

For one thing with those high zooms, it is difficult to keep a small subject like a bird in the frame. It takes very steady hands.

There seems to be some kind of contest in the camera business as to who can make the bigger zoom. Nikon goes as high as 83X now. I think that is overkill. If you decide to buy one of these new super super zooms, study up on the reviews for them. Go to your local camera store armed with some information. Handle the camera. Talk to the clerk. Buy the camera of your choice, and go looking for birds.