In the Weeds By Gary Howey 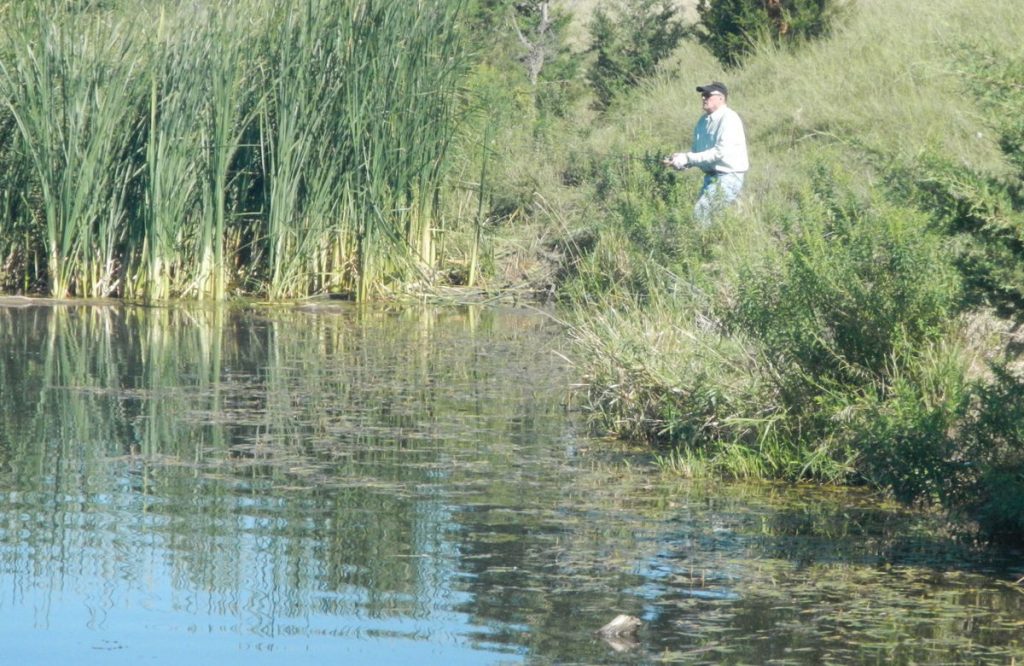 It’s that time of the year that some anglers love to see arrive, while others hate to see it. It’s when the fish become active, but getting to them on some bodies of water is a nightmare.

As summer progresses, the water temperatures are on the rise as is the weed growth with the first growth starting in the shallower water, and soon covering all of the shallow water on out into the deeper water..
If the body of water you’re fishing is clear, weeds make it almost impossible to fish and can quickly cover much of the entire lake or pond.

For those of us who plan to do much fishing this summer, we need learn to fish the weeds or fish one of the larger deeper lakes or reservoirs.
In this column, we’ll talk about the different ways a summer angler can go about fishing in the weeds.

All types of aquatic weeds grow in the waters of the upper Midwest and depending on the body of water that you’re fishing, they’ll come and go at different times.

In the ponds, lakes and streams that are shallower or clearer, weed growth occurs earlier and heavier than those weeds found in areas with the dingier, dirty water.

Bodies of water in our area have several types of weeds including; cattails, bull rushes, lily pads, cabbage beds, hydrilla, as well as both native and invasive weeds.

At times, some vegetation is good as it produces oxygen and during the heat of the summer is the place fish find comfortable oxygen levels.

Fishing the weeds is a tough proposition as weeds are abrasive and will end up snagging your line, which quickly weakens your line, so you’ll need to go with a heavier line than you generally use.
Weeds aren’t just hard on line, but once a fish is hooked in or near the weeds, they will go deep into the weeds and you’ll need some heavy line to drag them out of it.

You’ll find bulrushes and cattails in most ponds, lakes as well as in the backwaters in the river, with the bass, walleye, bluegill, perch and pike in these areas waiting for an easy meal.

Livebait anglers using bait rigs or jigs tipped with worms, minnow or leeches worked in and around the openings of the vegetation do well as do baits suspended under a small bobber.

Some of the more popular livebait rigs that work well when fished along the edge of the weed line are livebait, slip bobber rigs and jigs.
One livebait rig I’ve used to fish along the edge of the weeds included a Northland Roach Walker Sinker that allows my line to slide through, a snap swivel attached to the line below the slip sinker and a 10″ to 12″ snell with a # 2 hook tied below the snap.
Tipped with one of those baits I mentioned earlier, this rig is deadly during the summer months and when fished during cold fronts.

As the fish picks up your bait, you can drop back your rod or feed the fish line, as your sinker is not tied directly to the line, the fish feels little resistance and is more apt to hold onto the bait.

The rig works well when vertically jigged in the pockets between the reeds and rushes or along the weed line.
Slip bobber rigs fished long the edge of the weed lines are also very effective, this rig is made up of a slip bobber like Northland’s LITE-BITE SLIP BOBBERS, a bobber stop above the slip bobber to set the depth, a small split shot (weight) with a small hook tipped with a minnow, leech or part of a worm.
These rigs are easy to cast and by using the wind, allow you to present their bait naturally in the areas the fish are waiting in ambush.
Other baits that work well in these areas for bass and pike include; Northland’s Reed Runner spinnerbaits or their Buzzard Buzz Baits and weedless spoons.

If you’re into fishing with plastics such as Berkley Gulp or PowerBait, you can rig these baits to make them work through weeds without being hung up.
Baits like s Texas rigs work well in the weeds, Texas rigs include a bullet type weight that your line runs through, and attached to the end of the line is a large bass hook. Slide your plastic bait, worm, crawdad or salamander clear to the top of the hook eye and then the point of the hook is placed back into the plastic so it is just under the surface of the bait.
When a bass hits, the angler can set the hook hard, forcing the point of the hook through the plastic and into the fish’s jaw.

Carolina rigs also work well in weeds, similar to the Texas rig, with a bullet type sinker with a snap swivel tied to the end of your line where you attach a 10″ to 12″ leader with a smaller bass hook; and then thread your plastic bait onto the hook in the same manner as the Texas rig.

Rigging it this way allows the plastic bait to float up, making it more visible to those fish hugging the bottom.

To make these baits more weedless, you can peg the bullet weight using a toothpick to keep the weight from sliding and tangling in the weeds.

Cabbage beds and lily pads are another common weed found in our waters, growing from the bottom up, spreading out along the surface.
These weeds provide fish with a place to slide underneath, avoiding the sun, find cooler temperatures and because the majority of the weeds are on the surface, they can cruise beneath the weeds waiting for something to drop in for lunch.

In these types of weeds, a Northland Jaw-Breaker weedless spoon worked over the top of the weeds, a surface bait, buzz baits or spinnerbaits will often bring the fish up out from under the weeds to get at your bait.

Try casting your buzzbait, spinnerbait or weedless spoon into the open pockets in the weeds or areas where the weeds lie just below the surface and then by holding your rod high, cranking hard on your reel, you’ll be able to keep the bait running along the surface just above and through the weeds.
With the weedless top-water bait, you’ll want to cast it right into the weeds, let it set a second or two and the slowly work it back across the top of the pads and floating vegetation. It’s a good idea to pause your bait from time to time, as this gives the fish a chance to zero in on the bait.

Bass know when the bait splashes down and follow it across the weeds, coming up through the weeds to nail your bait.

Once the water boils around your bait, you’ll need to set the hook hard, as you need to force the fish up to the surface and out of the weeds, skipping it along the top of the weeds to keep it from being hung up.

With Northland Reed Runner spinnerbaits or their Buzzard buzz baits, the key is to getting your bait up on the surface, working in open water and then skipping over and across the weeds. When using spinnerbaits, when coming into an open pocket, it’s a good Idea to let your bait drop, to helicopter down into the opening.

You’ll need to hold your rod high as your spinnerbaits blade revolves on the drop slowly into the open pockets and as the bait comes to rest on the bottom , rear back on your rod, crank hard on the reel allowing your bait to spin, moving fast enough to slide up over and hop across the next clump of weeds.
When using a Texas or Carolina rigged plastic worm, cast into the open pockets and the work the bait right through the middle of the heaviest cover.

Because these baits are weedless, you won’t need to worry about snagging up as the hook is buried inside the plastic worm.

In the summer, the best fishing happens early morning and late afternoon when the sun is at its lowest point when the fish are on the prowl.

Summer fishing can be hot in more ways than one, but once you’ve figured out how to fish the weeds, hot summer days on the water will be a lot more enjoyable.

<Gary Howey, originally from Watertown, S.D., now residing in Hartington, Neb. is a former tournament angler, fishing & hunting guide, an award winning writer, producer, photographer and broadcaster, a recent inductee into the “National Freshwater Fishing Hall of Fame” in 2017. Howey is also the Producer-Co-Host of the Outdoorsmen Adventures television series and Outdoor Adventures radio. If you are looking for more outdoor information, check out garyhoweysoutdoors.com, outdoorsmenadventures.com and like Gary Howey’s Facebook or watch his shows on www.MyOutdoorTV.com

← Prev: What To Do When Approached By A Game Warden Next: Seed Facts & Planting Tips By Austin Delano →