It may happen, And when it does-Fishhook Removal By Gary Howey

Nothing will spoil a great day of fishing quicker than having a hook embedded in your finger or other part of your anatomy.

If you do much fishing, as many of us do, the day may come when it happens to you or your fishing partner.

It can happen quickly, when you pull on your line to free a hung up lure or when you are trying to remove a lure or hook from a fish that is flopping around.

My tournament partner, fishing partners and I had it happen, when a hook embeds in an ear, nose, leg or other parts of the body.

When it happens, a person’s first reaction is to simply yank it out, well believe me, that is not going to work and will be painful, even if the hook is stuck just below the skin.

I hate to say it, but I have had to remove hooks from my fishing partners and had them remove a fishhook from my thumb.

But, as my partner and I found out, if it is a treble hook, when more than one of the hooks embedded, a trip to the emergency room may be the your only alternative!.

It was during a South Dakota Bass regional tournament on Lewis and Clark Lake, when a crankbait ended up in my partner’s leg. My partner and I had it dialed in were fighting it out for first place with another local team. We had a “special” colored lure that was really hammering the fish; it was the key to our success. Having purchased all those lures in northeast Nebraska as well as in southeastern South Dakota and from the manufacturer, we were being very cautious about losing them.

As many of you know, when it comes to bass fishing, especially on the Missouri River above the lake, pinpoint casting can be the key, as you have to drop your lure into small pockets in the reeds where the bass were waiting in ambush.

During our first day of the tournament, we had made several errant casts, loosing several of our best producing lures.

We were on the spot and we getting bit on almost every cast, when my partner’s cast was a bit long, hanging up on the cattails above the pocket. Not wanting to move in to spook the fish, he pulled back, hoping to dislodge the lure, and when it did, it flew back towards the boat, embedding the shallow diving crankbait in the lower part of his leg.

He quickly tried the yank, pull, rip it method, which only caused him great pain, it also embedded the hook deeper in his leg, I had used the fishing line method listed below before on single hooks and attempted to remove the treble hook with the method to no avail.

I offered to fire up the motor, run him back to the dock, take him to Sacred Heart Hospital; he wanted nothing to do with that, not wanting to give up. He hung in there, standing up with the lure embedded in his leg, operating the trolling motor, holding the boat in position allowing me to cast into the pockets to catch and put a few more fish in the livewell during the last forty minutes of tournament time.

He then stood during the first day weigh in the crowd with the lure protruding from his leg to see if we had put enough fish in the boat to slide into first place. After the weigh in, he was taken to the emergency room, put under and had the lure removed from his leg. They patched him up, and when he returned from the hospital was quite upset. While he was under, they removed our “Special” lure from his leg, discarded it, giving us one less lure to use on day two of the tournament.

If you are unlucky enough to end up with a hook embedded in your skin, below is an easy, almost painless method of removing a single embedded hook.

Illustration # 2
Secondly, have your partner push down on the eye of the fishhook, pushing the eye against the skin; this pushes the barb of your hook into the original wound. 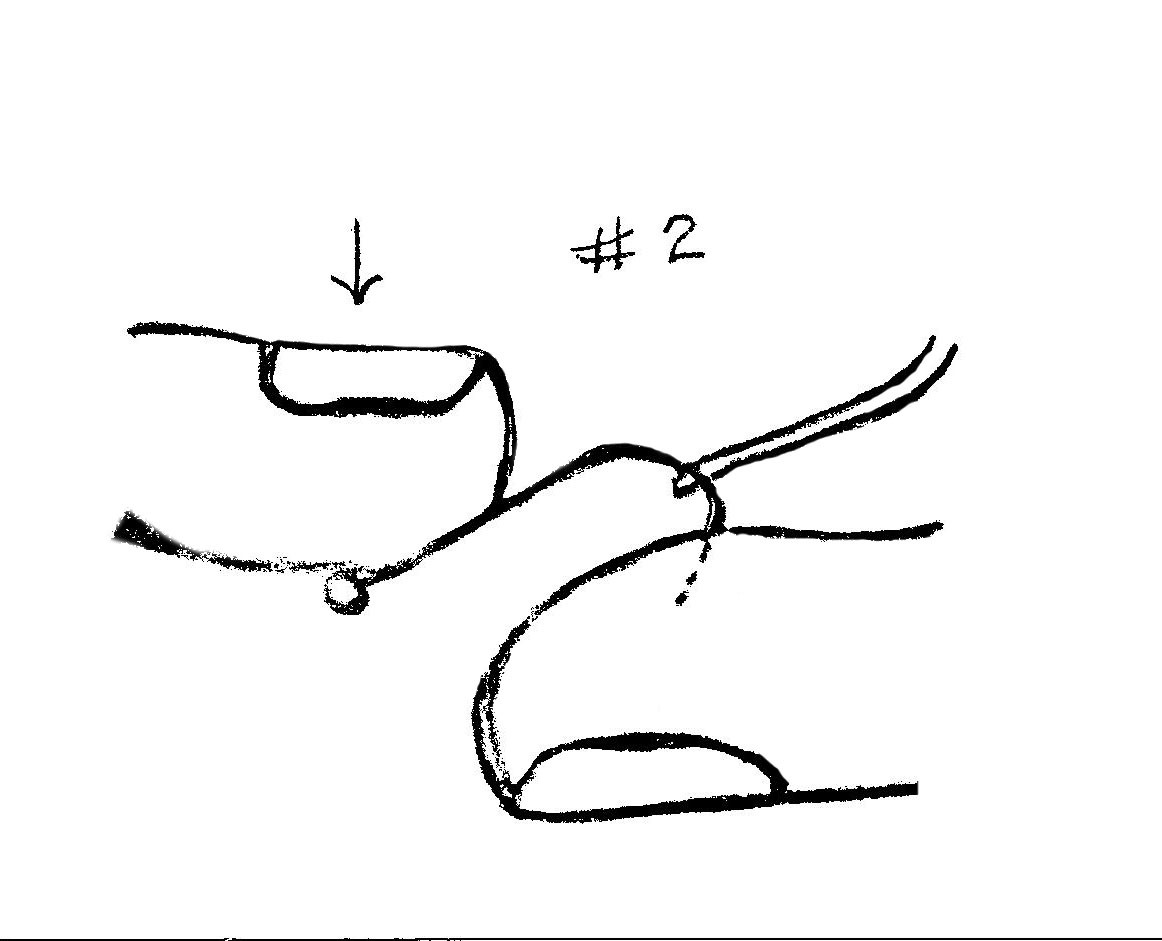 Illustration # 3
Then, while your partner pushes down on the shank of the hook, grip the string firmly on either side the hook and quickly pull on the string, the hook should pull back out the original hole.

Once the hook is out, you will need to cleanse the wound and if available with some sort of antibacterial ointment and then cover the wound with a dressing.

Since most fishing hooks are not clean, getting tetanus shot when you get off the water is a good idea.

Let’s hope I or any of you will have to implement this method, but if by chance you or your partner happen to get stuck, we will be prepared if it does happen.