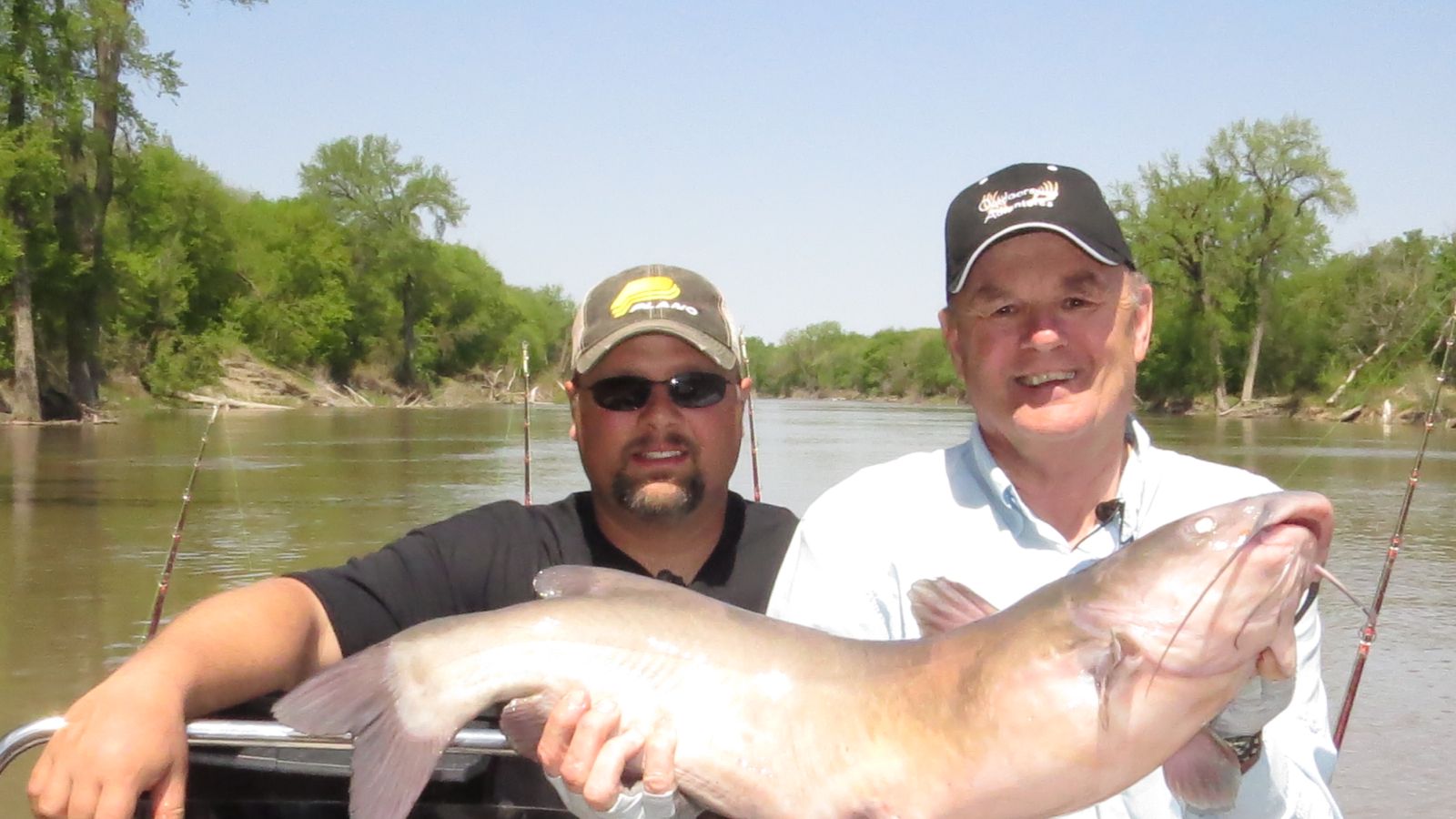 Grand Forks, N.D. The water in the Red River was up, up a lot, up thirteen feet with debris, branches, logs and even entire trees, floating by as they headed north towards Canada.

The Red River begins its journey north where the Bois de Sioux and the Otter Trail rivers flow between Minnesota and North Dakota flowing northward through the Red River Valley into Manitoba Canada.

Larry Myhre, Sioux City, IA. our guide Brad Durick and I found ourselves anchored just above one of Brad’s favorite catfish holes.

Brad, a guide specializing in fishing for channel catfish on the Red of the North, he is the author of the 2013 book, “Cracking the Channel Catfish Code” and a nationally recognized educator and outdoor writer.

On this trip, we were after channel catfish, which have poor eyesight, but a tremendous sense of smell as they have receptors in, along the outside of their lips and on the barbells protruding from either side of their month. Catfish use these receptors to follow the scent coming down river, helping them to locate their meals, even in the muddiest of waters. When you are fishing for channel catfish, you had better use bait that is oily and smelly the better if you want to entice these bottom dwellers into biting. We were using chubs and goldeye for cutbait, both oily fish and when cut into inch and a half to two-inch pieces, they leave a scent trail, which is easy for the fish to follow.

They may not be the prettiest of fish and more than likely found in or around the nastiest snags and logjams in the river, but they are fighters.

We anchored out of the current above a logjam in a location where Brad had found fish on his previous trips. Shortly after the rods were out my rod jerked violently and once I set the hook on the fish, I knew it was a good fish, not one of those nibblers; those bait robbers we often catch in the Missouri River back home.

When I put pressure on the fish, it turned, doing its best to tunnel back into the snag from where I pulled it. Brad had everything set up perfectly, the Rippin Lips Super Cat rods, reels spooled with twenty-pound line and sharp 8/O circle hooks allowing me to turn the fish’s head and bring it my way.

When the fish broke water by our boat, Brad slipped the net under it, a chunky eleven pounder and after a few photos; I gently released the fish back to the water.

As the bite slowed, we would relocate downstream to other spots within casting distance of some of the many logjams located in the river, ideal catfish habitat.

Larry and I were taking turns on the rods and when the next couple of fish came into the boat, I was thinking, finally I had the big fish of the trip and bragging rights.

Myhre was up when the tip of the big Rippin Lip rod dipped, bending almost in two, he set the hook hard and by the looks of the pressure being put on the long rod, my big fish title could just might be in jeopardy.

He brought the rod up, cranked hard on the reel handle, gaining a foot or two. The fish was irritated, doing its best to dive back into the logjam where a minute before it was lounging, as it waited for some tasty meal to drift by. The fish would take drag, where it had the advantage, with Larry bringing the rod up, cranking down on the fish attempting to gain back the line he had lost.

The battle between Larry and the catfish, reminded me of one of those back and forth fights, like you often see in the boxing ring. One fighter pops the other solidly in the head, the other boxer responds, going back and forth, appearing as if this fight just might be a tie.

In fishing, there are no ties, as either the fish gets back in the logjam, wrapping itself and the line around a snag, breaking off or the angler, with his heavy tackle, the drag set properly, will muscle the fish out of snag into the open water.

When the fish broke water, the fish’s broad tail slashed at the water, making another dive, trying to shake the hook from its upper lip. Larry would have none of that, turning the big cat and in the direction of the boat and as it came alongside; our guide scooped it up with the net.

Looking at the fish, it was longer and appeared to be fatter than my big fish, my eleven-pounder, and dang it, I was out fished again. The fish tipped the scales at sixteen pound, so I was going to have to step it up if I were going to capture the big fish title.

When the tip of the rod bounced, I was ready, moving into position, as I lifted the rod from its rod holder, I felt a tug and tugged back, I pulled back on the rod and set the hook hard. This was a big fish, but could it top sixteen pound? I put pressure on the fish, pulling it from the cover towards the boat and into the net. It looked close, perhaps this would be my day, but it was not to be as my largest fish would be a fifteen pounder, I had been beat by one pound, but there was still time.

Larry’s next fish, one of the seven catfish we would catch, another nice fish, one in the seven-pound class.

I was running out of time when my rod indicated a bite and I set the hook, the fish ran right into the mass of tree roots, limbs and branches. This was not looking good, as catfish very seldom swim out of a snag into open water. I put pressure on the fish, hoping to keep it from borrowing too deep into the snag, then it happened, it swam out into the open water. It was not a big fish, but it just didn’t seem to be fighting like a catfish, it was doing a head shake like a walleye would, but it couldn’t be a walleye as they feed by sight and in this turbid water, it would be impossible for a walleye to find the bait, especially a piece of oily cutbait.

As it neared the boat, a familiar body size and coloration came into view. It was a nice four-pound walleye, one we would film and release to go back into the snag to hang out with some of its catfish buddies.

It was an excellent trip, even though I lost “Big” fish bragging rights by one pound, as we had caught seven catfish running from four to sixteen pounds and the one walleye.

Brad, who has been guiding for eight years, knows the river, what gear and bait to catch catfish, which he provides, making our four and a half hour trip on the river a great one as the Red River catfish are on the bite.

More information on the great fishing on the Red of the north, give Brad Durick a call at 701-739-5808, via E-mail at braddurick@gmail.com or on the web at redrivercatfish.com