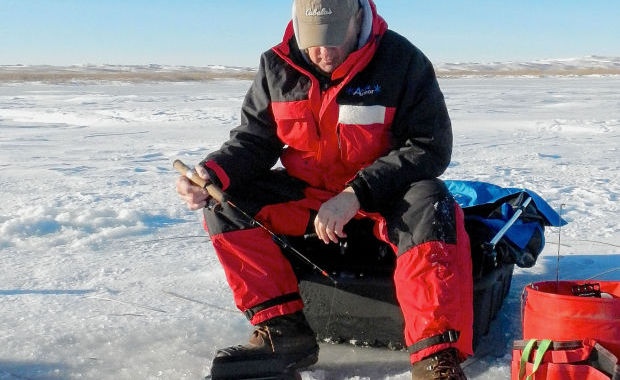 It’s a well-known fact that fish can become conditioned to certain popular lures on hard-fished lakes and ponds. If everyone is using the latest, hottest lure, it soon becomes not so hot.

That’s why it is a good idea to try lots of different styles of baits and colors, especially when ice fishing.

Since I’ve been tying my own flies and jigs for more than 40 years, it’s not surprising that years ago I began tying flies for ice fishing.

Within the 546 pages of this book was a chapter entitled “Flies for Winter Fishing,” with directions on how to tie various ice flies. Naturally, I couldn’t stop there and was soon creating my own patterns.

Panfish can be mighty picky little fellows so it pays to change up your lures and baits from time to time. If there is lot of pressure on the lakes or ponds you fish, it becomes even more important.

Originally, I tried to imitate what the fish were eating, dragon fly larvae, freshwater shrimp, bloodworms.

But it soon became apparent to me that it was not the pattern that caught fish, it was the color and size.

While we usually used small split shot pinched on the hook just behind the eye for the head of the fly and painted it, today there’s a better choice.

When metal beads made their appearance in fly tying, I quickly adopted them to ice flies. After all, a metal bead at the head of the fly makes that more of a jig than a fly. Even today, there are still dedicated fly-fishing purists who will not use bead head flies.

The next advancement in beads was the use of tungsten. Tungsten beads are much heavier than other metal beads the same size.

You will still have to apply a small split shot or two a few inches above the fly to get the necessary weight to get down quickly and float that float, if you are using one, just right.

Like other ice-fishing lures, you will have to tip the flies with some kind of bait. I like spikes or goldenrod larvae. I don’t want the bait to overpower the fly. A waxie is just too large. Of course you can squeeze the juice out of them, tear them in half and just use the skin. That works.

Bead head flies are tied to imitate some type of aquatic nymph and they come in a bewildering number of different patterns. When it comes to picking some out, just select those that look good to you.

If you want to know some actual patterns to use, here are a few. Gold Ribbed Hare’s Ear, Bitch Creek (little rubber legs at head and at rear make this a good choice and it’s tied as large as size 8), Prince Nymph, San Juan Worm, 20-Incher, and Breadcrust. Those should get you started. There are a number of places online where you can purchase these flies.

For bluegills, you will want bead heads in sizes 8 to 12 and for perch and crappies size 6 to 10 will work well.

Another little trick you can use when ice fishing with bead heads is to dip the fly in Berkley Gulp liquid. A well-soaked fly may not even need a grub to get bit.

As long as we’re talking kind of “off the wall” ice fishing methods, here’s something else to try.

Panfish are mighty curious little fellows. An old ice fishing friend of mine used to drop a fish spearing decoy down his hole and jig it a few times then reel it in and drop down his bait. Nearby panfish would see the decoy and swim in for a closer look.

We often do the same thing with a Chubby Darter.

My approach is a little more subtle. I tie a single strand of red yarn with half hitch leaving the ends dangling about four inches on each side, A split shot above and below the yarn which is about 8 to 10 inches above my tear drop. The waving arms of yarn will draw fish in and once there they may take your bait.

If I’m using a jigging spoon, I’ll tie the yarn at the eye and use a tiny split shot above it to hold it there. I trim the yarn legs so they are slightly longer than the spoon.

Do little things like this really work? Well, last time out on a bad bite I iced seven perch while the best done among my three fishing buddies was four.

I’ve often said successful fishing is often the result a lot of little things. Maybe the yarn trick is one of them.

And, maybe fishing flies under the ice is another.

More outdoors information can be found at siouxcityjournal.com/sports/recreation/outdoors

← Prev: GET AHEAD OF THE GAME Next: Cold Weather & Hardwater Angling By Gary Howey →