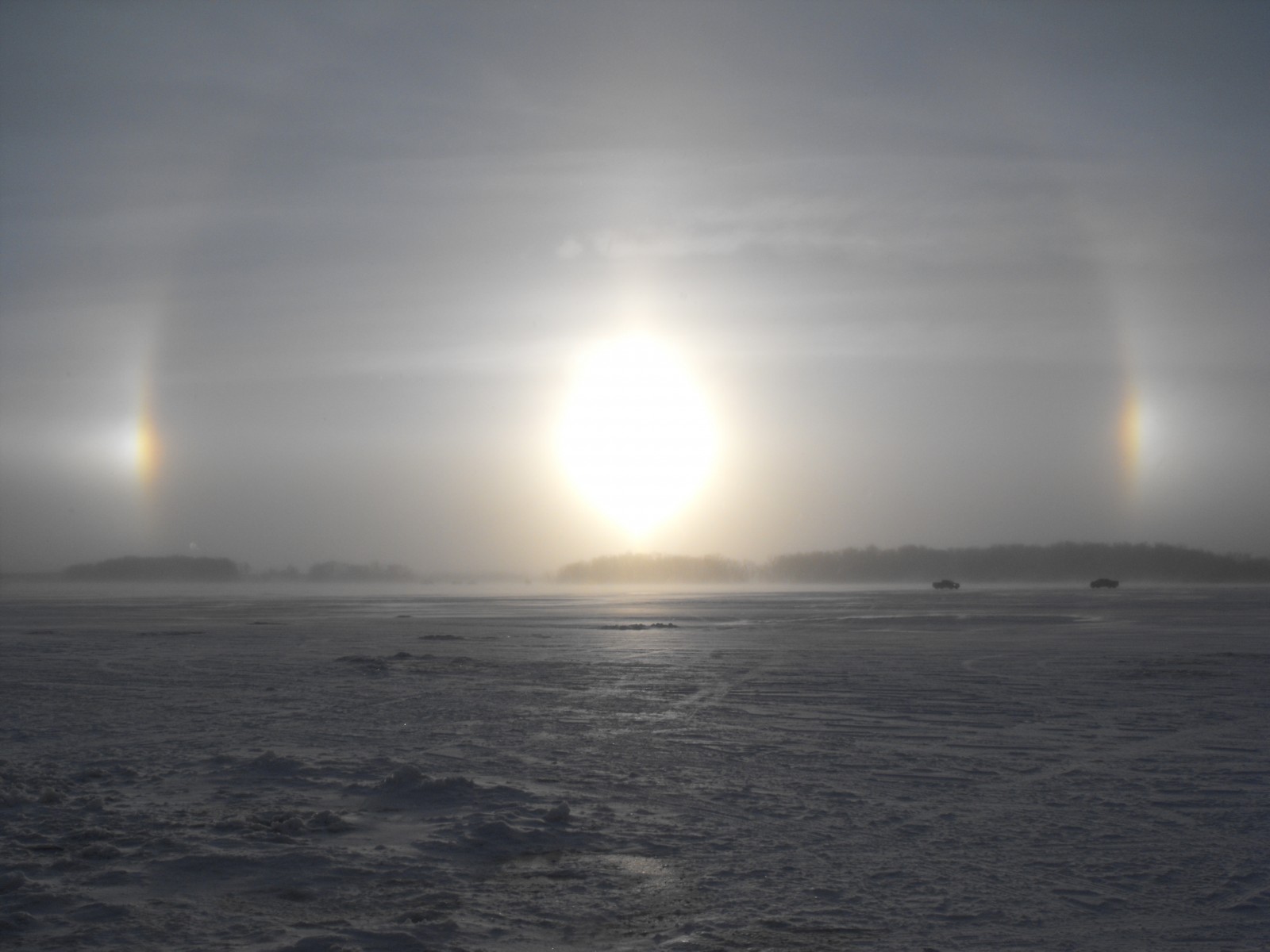 Some folks may wonder about those of us who spend time ice fishing, to be honest with you, there are times I wonder about it myself. Wondering why we would leave a warm lodge when the wind chill is minus thirty degrees the answer is simple, we Love it!

Last week our crew, Team Outdoorsmen Adventures members Larry Myhre, Sioux City, IA. Scott Ulrich, Hartington, NE. and I made our way north to Hidden Hills Lodge, Roslyn, S.D. On this trip, we would be fishing the ice-covered Glacial Lakes in search of perch and walleyes.

We will be fishing in the Glacial Lakes of South Dakota, the part of the state where I grew up, where my love of the outdoors was nurtured.

Returning to the area, reinvigorates me, bringing me back to a time and the places where life was less demanding.

Hidden Hills Lodge, owned by Lorrie and Len Sanderson and their wives as its name implies is located on the banks of Hidden Lake, a beautiful private lake holding excellent populations of perch and walleyes. Within forty miles of the lodge, you will find over forty lakes, most offering excellent fishing

We arrived on a beautiful sunny winter day, with most of our crew already on several of the lakes found in the area. It would not take us long to realize we should have arrived earlier as our crew as well as others were tearing up the perch and walleye on several lakes and sloughs in the area. One group, from the Omaha area who were staying at the Lodge, stayed on the ice until after dark, which paid off as they had a nice bunch of perch and several walleyes, with one over nine pounds, a real trophy which would soon be on the wall. Casey and the crew who had fished in another lake in the area had also caught some nice perch all around one pound.

Anyone who spends much time fishing or hunting knows, Mother Nature is the boss and as we were feasting on an unbelievable prime rib meal, we were once again reminded of it as

KELO-TV was reporting the temperatures the following day would reach a high of nine degrees with winds up to forty-two miles per hour and a wind chill of minus twenty-nine degrees. Now that is COLD, but it could and it would get worse.

With the wind howling outside, I headed for bed, but before calling it a night; I made sure I was ready for tomorrow.

Digging through my bags, I proceeded to get ready for the cold morning temperatures we would be facing. I dug through my bags, looking for my cold weather gear including; my Long Johns, Polypro socks, Wool socks, Heavy Wrangler jeans, Heavy turtleneck, Sweatshirt, Arctic Armor Ice Fishing bibs and jacket, Heavy hooded sweatshirt, Cold weather boots, Polypro glove liners, Ice Team gloves, Face Mask, Stocking cap and last but not least my Kahtoola Microspikes Ice cleats. With all of this, I hoped to be dressed warm enough be able to spend some time out on the frozen tundra without becoming a Popsicle.

The wind blew hard throughout the night and upon awakening when the sun appeared, it was surrounded by a pair of sun dogs, signaling the start of another cold day.

After a hearty breakfast, our caravan headed for Club House Slough, located a short drive from the Lodge where the day before the cold front moved in, the perch bite had been excellent.

Upon arriving, the blowing snow created white out conditions making it hard to see what was going on out on the ice? As we worked our way out onto the ice, through the blowing snow, we could see dozens of icehouses; shelters and sleds set up along the far end of the lake.

If we were to use our one-man Clams, we had brought along, filming was going to be tough and when Jeff Arnesen, Aberdeen, S.D. offered to allow us to fish in his Ice Lodge, we quickly accepted.

Using our Vexilar’s, light rods and jigging spoons tipped with minnow heads, our crew probed the depths of the slough. When one or more of our Vexilar lit up, one of our crew would do their best to entice a bite and then to set the hook, bringing one of the sloughs numerous perch onto the ice.

We fished the slough until mid afternoon, where the bite was not frantic, yet we managed to put thirty perch on the ice, many of which would be right at a pound.

Our plan would be to head out onto Hidden Lake, the Lodge’s private lake where guest at the Lodge the night before had caught the big walleyes and perch. 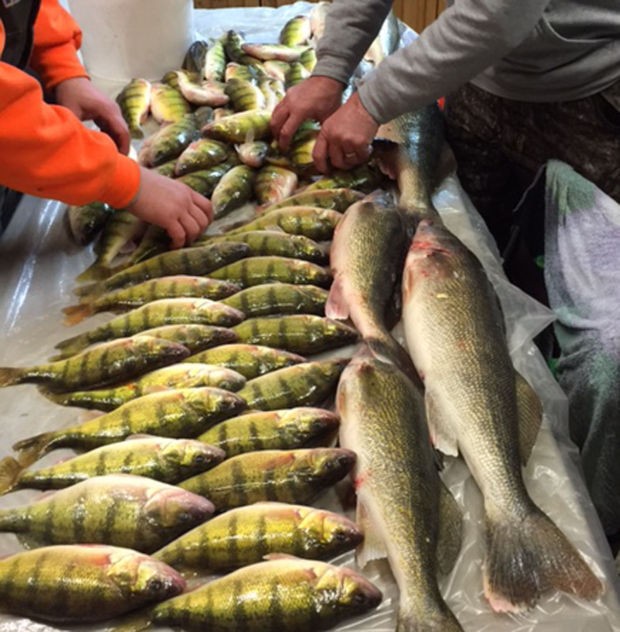 Once again, because of the weather we would be fishing out of Jeff’s Ice Lodge, while others toughed it out on the ice or in their Clams.

Shortly after we arrived, Corey Struder from Vexilar put the first fish on the ice. He was fishing out in the open where he landed the first walleye of the day, a chunky 2 pounder. Later Craig Oyler, Ice Team Pro fishing out of a Clam, landed the big fish of the day, a fat seven-pound female that he released back into the lake. Greg Liebel, fishing out of his Clam added several others while the bite in our house was slow. When our Vexilar’s would light up, the fish were finicky with many of the fish coming in under us ignoring our offerings. Jeff and Boomer Stelmach both took fish, but nothing like the guys had taken the day before as the cold front, had definitely slowed the bite.

As the darkness came over the landscape and with the temperatures dropping, we called it a day with four more walleyes and five perch. The brutal cold made packing up our gear a cold job and we were happy to make the short drive back to the Lodge.

The following morning we had hoped to do some more fishing, but the minus fifteen below zero and heavy winds quickly convinced us to pack up and make the cold trip home.

The folks at Hidden Hill Lodge do an excellent job, a beautiful lodge, serving unbelievable meals and have superb accommodations. If you are looking for a great place for a family get away, to have a corporate meeting, to pheasant hunt or an excellent fishing destination, you will want to check out Hidden Hill Lodge. You can give them a call at 605-550-0445 or look them up on the web at hiddenhilllodge.com.

If you want information on all that is going on in the Aberdeen area, check out their web sites at HuntFishSD.com and VisitAberdeenSD.com.