WATERTOWN, S.D. | It was beginning to look bad for the home team. We had been on the ice for about three hours and had only one walleye to show for it.

And that one had been caught by our friend Chuck Krause, Gettysburg, S.D., who was fishing with Don Fjerstad, Watertown, S.D., just before Gary Howey and I arrived.

We were on a lake called Dry Lake, a glorified slough southwest of Watertown which, like many former sloughs in northeast South Dakota, have begun to swell as lakes over the past 15 years or so.

One thing they all have in common is high populations of perch and walleyes.

But you sure couldn’t tell that by looking into our ice buckets.

It was well past 3 p.m., and we didn’t have much time to redeem ourselves. Then Chuck’s cell phone rang. It was his nephew Junior Burns, Watertown, who was fishing at the north end of the lake.

“I just put three walleyes on the ice,” he reported.

It didn’t take us long to pack up and head north. Aren’t cell phones wonderful?

Gary, of Hartington, Neb., was hoping to catch enough action to produce a segment for his Outdoorsmen Adventures television show. Things were going to have to improve quickly because the next day’s forecast was for a monster cold front with northwest winds of 25 to 30 miles an hour. Once that front hit, I was confident the catching would turn from worse to terrible. As they say, this wasn’t my first rodeo.

As our caravan of three vehicles headed to the north end of the lake it was clear that fish had been caught here. There were a number of ice houses and a whole bunch of portable shacks as well as guys just fishing out in the open.

We quickly punched a bunch of holes and settled in.

Fjerstad set the hook and announced he had a fish on.

It was putting a pretty good bend in his rod and Gary pulled the depth finder’s transducer from the hole so the fish wouldn’t tangle up in it.

Before long Fjerstad slid a fat perch onto the ice. It was about a pound and a half.

Yet, big perch honors went to the fishing guide from Gettysburg. Using a small spoon tipped with a perch eye, Chuck brought up a big yellow perch that went 1.8 pounds on Burns’ scale. 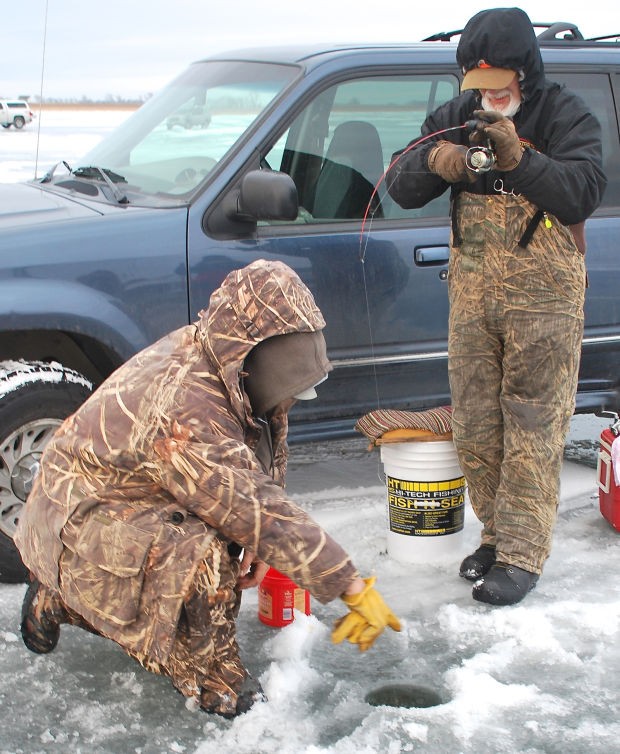 Don Fjerstad, Watertown, S.D., fights a nice walleye while Chuck Krause, Gettysburg, S.D. kneels by ready to help. The fish tore loose after the treble hook on the lure caught in the ic

Burns added another walleye or two and Gary scored with another big perch. I added a couple of walleyes, but again, it was Chuck who took big fish honors in that category as well. His walleye was pushing 4 pounds pretty hard and after a quick photo he sent it back down the hole. Smaller walleyes eat a lot better.

Fjerstad soon connected with another big walleye and this fish certainly didn’t want to cooperate. Finally one of the treble hooks contacted the ice at the bottom of the hole and the fish tore off.

While that certainly would have challenged for the big walleye, Fjerstad came away with the best fish story of the day.

It seems that before Gary and I got on the lake, Don had hooked a nice northern pike of about 5 pounds. He had a dead rod in another hole a couple of feet away and, naturally, the northern tangled up in that line and pulled the whole rig, rod and reel, into the water. Fjerstad managed to land the northern and his line was still attached. He pulled his rod and reel through the hole and back onto the ice, saving it.

We pulled off the lake at dark with a pretty good catch to show for our efforts.

But the next day was as forecast. A howling wind swept out of the northwest and I just blocked the air temp out of my mind. We set our portables up on the lee side of our trucks and began to fish with propane heaters going full bore.

We sat it out for almost four hours. Four hours of boredom. I never marked a fish on my depth finder. Gary hooked into a northern, but it got off after tangling up in the line leading to the underwater camera. And that was it. 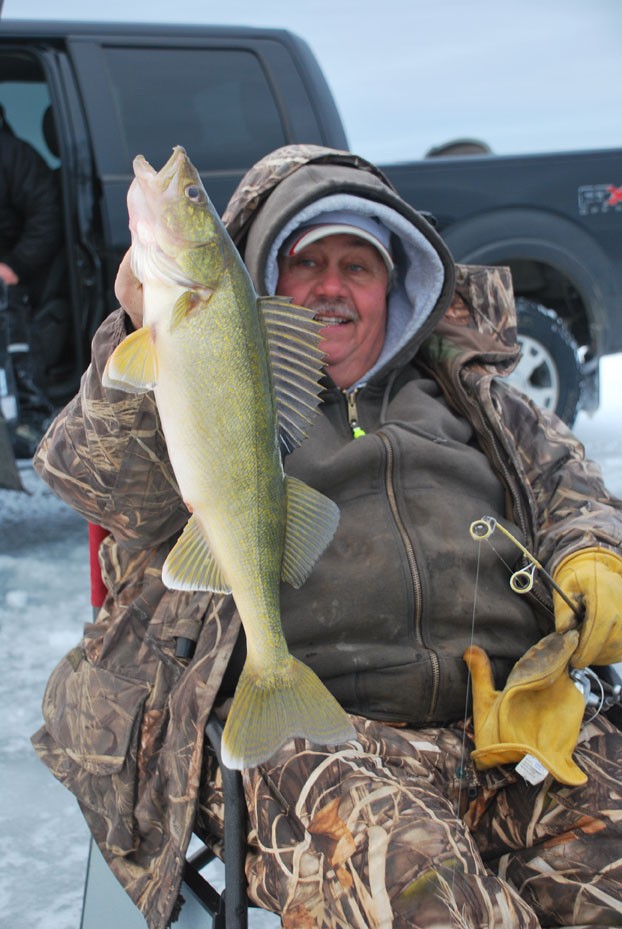 Chuck Krause, Gettysburg, SD with the biggest walleye on the trip which e=was released after the photo.

Cold fronts and February ice fishing are not a good combination.

More information on the outdoor s can be found at www.siouxcityjournal.com/sports/recreation/outdoors/