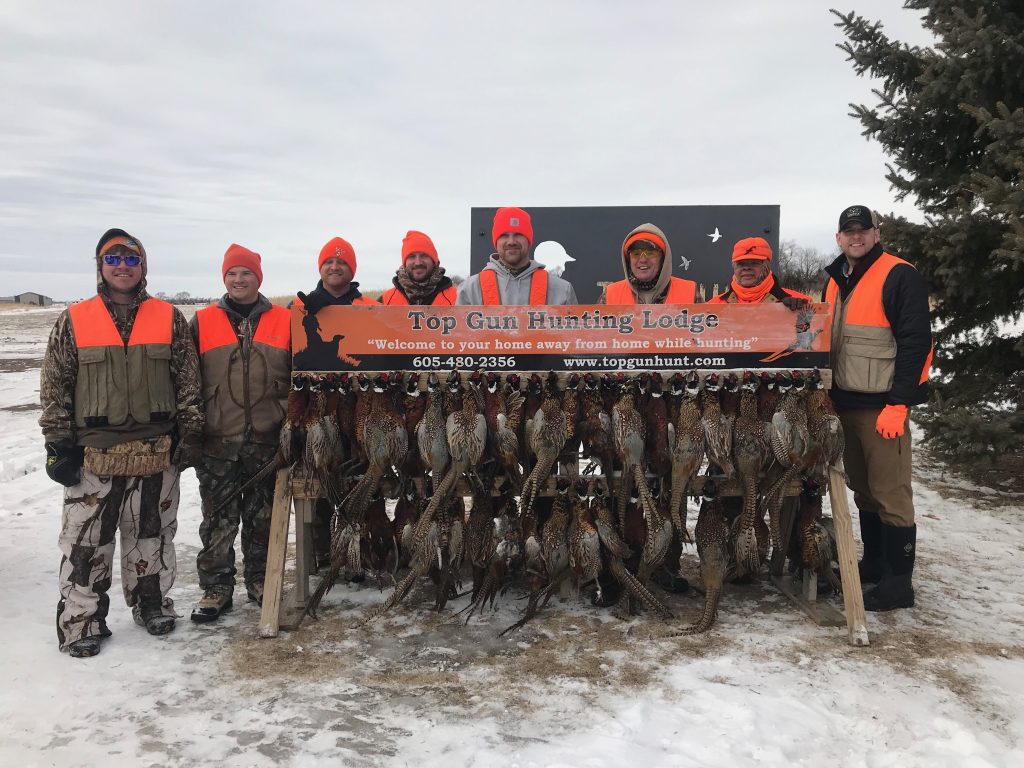 As the hunters neared the center of the field, several birds came up out of the cover,

Micah Likness Yankton, S.D. as well as others, yelled “Rooster”, allowing those hunters on either side and those blocking know that they were shootable birds.

I was on the wing and saw the birds coming up, using the wind to their advantage, they gained attitude as they rose, winging their way out of the corn.

The shotguns of those hunters, pushing the middle, came up quickly and with the report from several shotguns, two brightly colored roosters tumbled to the ground.

Only one rooster made it through the original barrage, but as it came between the walkers and blockers, quickly picked up by the opposite side wingman and a single shot brought it to the ground, with the dogs quickly retrieving the birds as the group continued our push through the corn and grass.

After walking the first field, with the first birds of the hunt added to our game bag, I thought to myself, this wasn’t Micah and his groups’ first rodeo as the way these hunters shot, this hunt could end quickly.

It was February 16 and when I arose, the outside temperature read six degrees, a little cool to be heading north for a pheasant hunt near Howard, S.D. with those who’d purchased this hunt during an auction for the Dive in Yankton, Aquatic Facility fundraiser from KVHT radio.

Dollars raised from this event and other fundraisers will help to add to and rebuild a 21,300 square foot aquatic park in Yankton, S.D.

We joined Kevin Shumaker at his Top Gun Hunting Ranch lodge for this late season pheasant hunt on the 3200 acres ranch, 2000 acres of it in the preserve with CRP, grasses, shelterbelts and food plots.

Kevin donated the hunt and host Josh Anderson and I would film the hunt for one of the Outdoorsmen Adventures television shows.

We met Micah and the rest of the group at Top Guns Lodge, where we donned our cold weather and hunter orange clothing, as Kevin loaded his dog trailer with a number of his well-trained dogs.

Our first field we walked consisted of a foodplot and grass strips, with several of us walking while two of our hunters proceeded to the end of the field to block.

The walkers along with the dogs pushed the middle as one wingman on either side of the corn moved slightly ahead of the walkers helping to keep the birds in the corn and having the opportunity for a shot at the birds that came up out of range of our walkers.

Our job, as walkers, was to work our way slowly through the corn, letting the dogs work ahead as they picked up the scent of the birds, zeroing on them, where they pointed or flush the bird.

As Kevin moved through the field, one of the dogs, went on point, Kevin indicated that there was a point up ahead with the walkers slowly moving up behind the dog. Nearing the area the dog had pointed, Kevin said, “get him out of there”, with the dog moving forward, flushing not one but three birds.

Our guns came up in unison, with Micah and David getting a bead on one bird, dropping it, while the hunters on the outside did their best to take the high flying bird with the wind to its back coming out ahead of them.

Just as before, very few birds escaped, with the dogs rooting out any birds that dropped.

At times, on a hunt, the best hunting can happen anywhere in the field, sometimes it’s in the field while at other times it happens when the hunters and dogs approach the end.

Pheasants are notorious runners, preferring to run away from danger, taking wing when they are well out of shotgun range.

Those birds that didn’t make the mistake of coming up within shotgun range, those running ahead of the walkers either come up out of range or bury themselves in deep cover, hoping the hunters walk by, which rarely happens when hunting with dogs as they root them, or the birds burst from the cover at the end of the field.

As the walkers approached the end of the field, another hunter and I stationed ourselves on the far side of the cedar shelterbelt, waiting for the other hunters to push the birds to us.

Sometimes, the best-laid plans don’t always work out and as the hunters approached us, just a short distance of where we blocked, we prepared for what we just knew was coming, roosters taking wing out all around us out of the cedars, in shotgun range, giving us some of the best shooting opportunities of the hunt.

The walkers encouraged the dogs to “get them up” as they slowly moved up on the trees and the end of the field.

We could see some of the dogs working the cover through the trees and they were “birdy” getting close to the birds, when the sound of the birds blowing from the cover, their wings  grabbing air as they made their way towards us, it was about to happen.

Then, there were numerous shotgun blasts, then others, and as a bird got up above the trees where we might have a shot, another shot echoed through the cedars and the bird went down.

The shooting subsided as the dogs made their way through the trees followed closely by the walkers, when one of the hunters asked, “Get any birds”, Jokingly, I said “not the way you guys were shooting, none got away,”

We hunted several fields, corn, CRP and some trees, on each trip through the fields, there we lots of birds, with the dogs doing a great job, finding and retrieving and some excellent shooting

It was an excellent hunt, with plenty of pheasants; where we spent some time with old friends, met some new ones and a hunt helping to raise funds for a good cause.

Gary Howey, a Watertown, S.D. native, now residing in Hartington, Neb. who is a former tournament angler, fishing & hunting guide. Howey is an award winning writer, producer, and broadcaster and inducted into the “National Freshwater Fishing Hall of Fame” in 2017. He is the Producer-Co-Host of the Outdoorsmen Adventures television series and Outdoor Adventures radio. If you are looking for more outdoor information, check out garyhoweysoutdoors.com, like Gary Howey’s Facebook or watch his shows on www.MyOutdoorTV.com.