Late season, just before freeze up is the time you should be on the water fishing for walleyes as they have started making their way upstream in preparation of next spring’s spawn. In the Missouri River System, this migration is halted by the Missouri River dam systems.

Because the fish are stacked up below the dams, you will find them in the same general area you found them in early fall, perhaps a little deeper as they are in that transition period where they will soon be moving into their wintering areas.

Since water temperatures have dropped, so has the fish’s metabolism, so a slow presentation is what is needed to catch them. Many of the fish will have worked into the deeper water, just off the drop offs, moving very little.

The preferred bait during the late season would be jigs worked vertically, just verily raising the jig off the bottom, holding it there for a second and then following it back to the bottom. Live-bait rigs such as Northland Roach rigs also produce well during cold weather and fished in the same manner as a jig.

Since water temperatures are cooling, you might have to play with the fish a bit.

This is the time of the year when you want to be a line watcher. In the late season, fish are not attacking your bait and may simply pick it up and move it to the side. By watching your line where it enters the water, you can detect these subtle bites.

When fishing jigs you might want to start out by giving the fish some slack line when you feel a pickup, as they may have simply stopped the bait and not have inhaled the hook.

Once you feel the weight on the end of your line, simply drop your rod back and then set the hook. 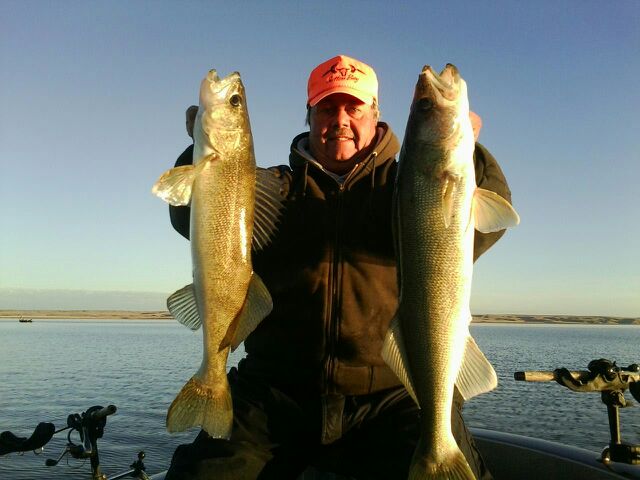 Early winter is one of those times when stinger hooks really shine, hooking those fish that are just messing with your bait.

Stinger hook are a made up of either monofilament or a light leader material with a small hook. Tied to either the eye of the jig or shank of the hook and then hooked into the back of the minnow, allowing you to hook those short striking fish just biting the tail of the minnow.

If you are fishing in an area with snags, a single hook stinger is your best bet. In clean bottom areas, a stinger with a small treble hook works very well.

Whenever you are fishing a live bait rig, no matter what the season, when you feel a fish take your bait, you will want to feed the fish a little line, allowing him to ingest the bait, generally a three count is plenty, and then set the hook.

If you have tried to feed line to the fish and come up short, start setting the hook when you first detect the bite, you never know until you try it.

Even when the water temperatures are cold and fish are at their slowest, once one fish starts paying attention to your bait it may entice other fish to bite.

Most of the fish caught this time of the year are going to be those smaller aggressive males and a few of the larger females. To assure there will be fish to catch in the future, release the females’ back, as they cannot reproduce, future generations of fish once, they are in your freezer.

Late season can be some great fishing, so when your work schedule and Mother Nature allows, hit the water as it may not be long before things really freeze up.

← Prev: Calling coyotes can result in surprise visits By Larry Myhre Next: 3 Tips for Seeing and Harvesting Bigger Bucks →