Learning from Past Experiences! By Gary Howey

I remember while growing up in Watertown, SD, about all the things there were to do and how I wanted to try to do all of them!

I also remember that several of these things weren’t what I really should have been doing.  My folks were always there to set me straight and would give me that old line, “you don’t need to do that, you could get hurt” and so on and so forth!

Well after many years of contemplating their statements and many years of wondering how they knew so much about this subject.  I’ve finally concluded that they knew because when they were young, they probably tried it or had a friend that tried it and “got hurt!”

Take for instance a guide trip that I had a few years back, I had two of the toughest clients that I can ever remember taking out.

It was late October, a warm October, but none the less October and in my neck of the woods; it’s that time of the year when water is about as close to becoming ice as it gets.

Well these guys insisted that I take them out as they wanted to take advantage of the warm day, it didn’t make any difference that the water temps were in the 40’s, it was a nice day and they wanted to fish.

Well as anyone who’s ever been on the water knows that at 40 degrees, fish aren’t exactly bouncing off the wall, heck, they’re hardly moving.

Anyway, I took these two good old boys out and tried everything I could to get them on fish.  When I put them on fish, they were about two jerks behind every bite.

As I could have told them before we went out, it wasn’t going to be all that great, at the end of the trip my tip really sucked, but I did learn something from that experience.

“Never take a couple of cranky old guys out in late October!” 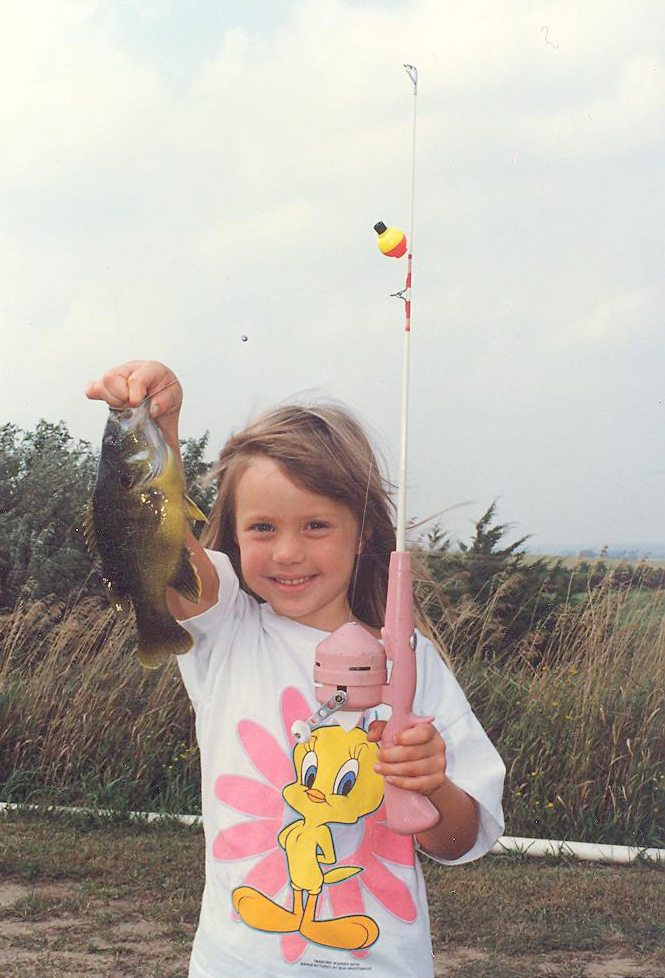 Cherish every trip out onto the water and especially those with your family and kids. The photo is the author’s daughter Cassie on a fishing trip where she caught a nice Green Sunfish.

Honestly, I learned a lot more than that, as this was one of those trips where everything was against us!

The water in the Missouri River was low! Low, heck it was darn near impossible to get my 18-foot boat in the water and loading it was even a bigger nightmare.

The fish were so lethargic that we’d have to bop them on top of the head to get their attention.

It was a tough day, but I found fish and every time I go out and find a similar situation, I use the things I learned that day, making a poor day into a pretty good one.

Since I started seriously hunting and fishing I’ve always kept a diary, in it I include all the information from the trip including light conditions, water temp, water clarity, water depth and wind velocity.

If I locate fish, I make a map of the area with all the landmarks, listing the bait I used, how I fished it and the test of my fishing line.

I no longer need to worry about the map making as my GPS now allows me to return to the spot or at least within a foot or two.

Learning from each trip is what makes you a great fishermen or hunter!  Like history, things in the outdoors do repeat themselves.

When I head out onto the lake, like everyone else, I always look for concentrations of boats and then I slowly cruise through that area or hot spot, checking the depth with my locator, the water temperature while looking at what type of structure is holding the fish.

Then, I head away from the crowd, looking for a similar area, because what’s holding those fish in that area definitely has something to do with water temp, type of structure, water depth etc.

If I can find an area that duplicates or comes close to the hot spot, chances are that there are other fish feeding in this area and I won’t have to fight the crowd.

Once the day is over, I’ll log in the information and keep it for future reference.

Sure, I look for new areas that will hold fish, but once I locate them, I’m relying on past trips to help me to choose my fishing method as well as the bait I’ll use.

Cherish the great trips and learn from those that aren’t so great!

Like they say, you don’t want to live in the past, but by learning from past experiences, your future trips on the water and in the field will be more successful!