Looking back at this spring’s turkey season By Larry Myhre

It’s moments like this that make me love turkey hunting.

The response to my yelps on the diaphragm call was loud and raucous. It was the guttural cough of a wild turkey’s gobble. Then another followed immediately after.

I crouched down behind a tree, caught a little off guard.

Up to now it had simply been a walk through the woods, yelping occasionally with nothing answering other than the occasional caw of a crow.

But that’s how it is sometimes.

I had carefully been making my way between the trees across a small gully to a cleared pastureland dotted with a few trees. I had hunted through this spot many, many times in past years but never encountered a tom turkey here. I thought it odd because this looked like a perfect spot.

Then, I thought I caught a glimpse of a fan. It was just the tips of the feathers of a fanned-out tom. So I yelped and got an immediate response.

It caught me way off guard. My camo mask dangled around my neck and my fancy, folding turkey hunting chair was slung over my back. I shucked the chair, pulled up my mask and yelped again. Gobble, Gobble.

It was two toms, and they were very close now.

I saw them strut into view, their big beards dragging the grass. I couldn’t help but to yelp again, just to watch them gobble.

I was rewarded with a double gobble from each bird.

The largest was on the left, and I focused on him as I gave a loud “Putt” with the call. He raised his head in alarm, and I put the bead of the shotgun sight at the base of his neck and pulled the trigger. 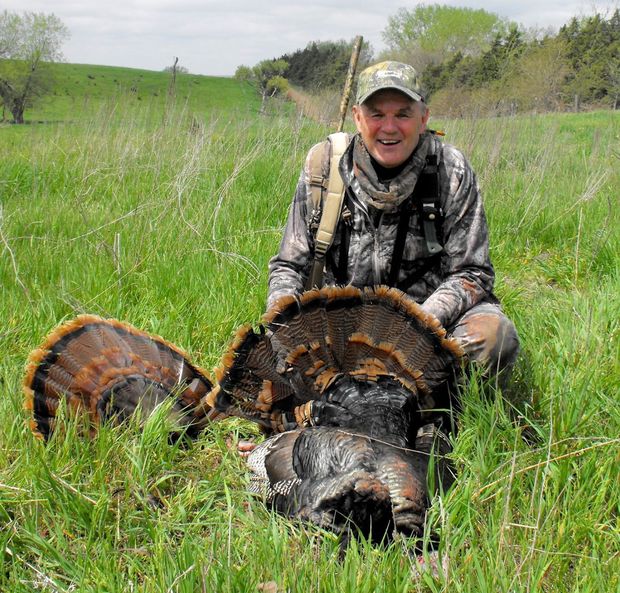 Gary Howey, Hartington, Neb., brought this big tom into shotgun range with a series of calls and waving a fan taken from a bird on a hunt in earlier years.

The little 20-gauge jumped against my shoulder and sent out a load of Hevi-Shot, a mixture of 5, 6 and 7 shot into the bird. It dropped like a ton of bricks and never even quivered. The other tom flew off, and I jumped up to see at least 8 hens and two more toms leaving the field.

My Iowa tag was filled.

I leaned the little Browning pump with the straight stock and 22-inch barrel across the bird and took a photo. One down, two to go.

Two days later, I was in Nebraska. Gary Howey manned the video camera. We set up before dawn alongside a small creek in a tree-filled draw. There were at least four gobblers within earshot, but like so often is the case at dawn, the birds flew down and went the other way.

Undaunted we drove the truck to another spot a few miles away.

We pulled up behind a large pile of cut timber and silently got out of the truck and walked to the wood pile. I was just about to send out a series of yelps on the box call when Gary ducked down.

“There’s a big tom with two hens right here,” he motioned toward the other side.

I slid back to the truck, retrieved my 20-gauge, loaded it and moved back to the wood pile. The big tom and hens were gone. They slipped under the fence to the adjoining property. I yelped on the box call and the big guy answered, but he was not interested in coming back.

There were, however, other gobbles. One far to our right. One far away to the front and another on the adjacent property behind the big tom.

I began to serenade them with the box call, and we watched three big toms walk down the hill far away to our front. And just then, three more slid under the fence about 50 yards out and began walking in.

Gary was out of position with the camera, but at 18 yards I picked out the largest of the three and put him down hard with the Hevi Shot.

We spent the rest of the day with me on the camera and Gary with the gun, but we found no takers.

After a close encounter with a few jakes, which got away unmolested, they spotted at least four toms strutting in a field about a half mile off the country road. They decided to try a stalk, so Gary grabbed a turkey fan from a previous hunt, and off they went taking advantage of available cover such as terraces and trees.

“When we had to cover open ground, I just held the fan up in front of my face with Ben walking close behind, and we moved to the next available cover,” Gary said. “I really believe that fan helped us get close without spooking the birds.”

They eventually ended up along a fence line with the toms a couple hundred yards away. Gary began calling and waving the fan. One of the toms left the group and walked right in. Ben dropped it with a single shot.

It was a nice tom weighing 22 pounds with a 10-inch beard and spurs over an inch long. That’s a nice way to open a turkey hunting career.

Two days later, Gary went back out with a friend running the camera. They spotted a tom strutting in a field. They hid the truck and moved in. They couldn’t get very close so they set up, and Gary began calling and waving the fan.

Here came the tom. He walked right in and Gary folded him. His Nebraska tag was filled.

As I write this, Iowa’s final season is drawing to a close. Life and the weather has conspired to keep me out of the woods most of this final season, but I’ve learned never to say never. I might fill that tag yet.

END_OF_DOCUMENT_TOKEN_TO_BE_REPLACED

You will never forget your first boat By Larry Myhre

It started like this. A cane pole and the Big Sioux River. Eleven years later I would get my first boat and my fishing horizons would expand...