My First 2018 Spring Gobbler, “It was Self Defense” By Gary Howey

Our calls echoed through the thick cedars, nothing, not a sound, no response, we called again and the Tom which was not very far away gobbled. Then a hen appeared along the brush filled fence line moving east away from us with the gobbler following close behind.

I had no shot, as Larry was off to my right, with several clumps of brush along the fence line in the direction the gobbler headed, where I had no shot. A decision had to be made and made quickly as soon, the birds would be out of sight.

I had been in the area earlier, but when no gobbler responded to my calls, I gave up on those birds and headed back to town to pick up good friend and fellow hunter Larry Myhre, Sioux City, Iowa from the Cobblestone Motel in Hartington.

The wind this season had been our nemesis, as the wind wanted to blow almost every day, making it hard to call and locate the gobblers.

We needed to find a place out of the wind, as we knew that more than likely that would be where the turkeys were, as they did not like wind either.

A friend of mine knew of a location with an abundance of cedars in a shelterbelt that the birds had used and our plan was to see if we could find a gobbler there.

It had been a tough spring turkey seasons for me, as several weeks into the season on my first hunt of this spring, my grandson Dylan Kneifl , Pilger and I were out to see if we could bag his first gobbler.  The birds we located would not gobble and those locations where we saw birds strutting earlier, the birds had vanished.

The day before,  the weather man had predicted a nice day with light winds, Larry came over to hunt with me and  even with the “Light” 35 mile per hour winds the weatherman predicted, we were able to tag his bird, but that a story for a another  time.

Because we glassed our hunting locations and saw no birds Thursday, we were not sure where to set up on Friday.

I went out early that morning northwest of Coleridge to the area where we saw birds earlier, to set up and see what I could do. I had one bird gobble twice and then shut up, as he must have had a hen close by and gobbled as he followed her.

This was not looking good and after picking up Larry, we headed north of Bow Valley to check out a bottom where I saw a gobbler earlier that week. It was a futile attempt as we saw no turkeys and if they were there, they refused to answer our calls.

We decided to work our way back south to glass several of the areas I had scouted before season, locations that gobblers were using, but once again, nothing appeared and not one gobbler wanted to talk with us.

Our first stop would be to talk with some friends who were working near the cedar shelterbelt to see if the birds in the area were talking.

They indicated that a Tom gobbled earlier that morning north of the place, so we worked our way north, hoping not to sneak into the cedars without spooking the birds.

The cedars in the shelterbelt were so thick, in order for us to get through them; we needed to crawl under to make our way into the open areas, which would make a lot noise, which would alert the birds of our presence.

As we made our way towards the cedars, it appeared the only place to set up was along the fence line. 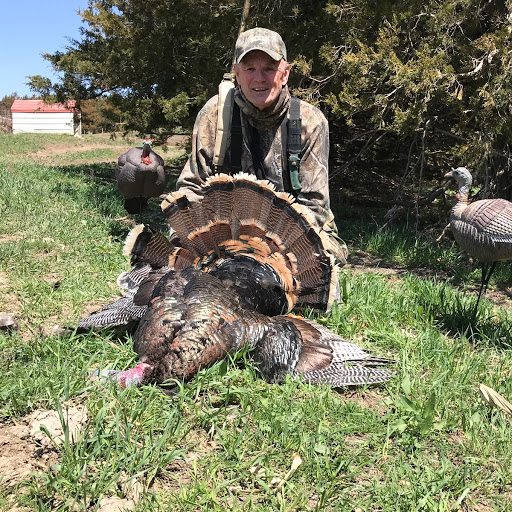 The authors with 2018 Nebraska spring season gobbler that charged and attacked his turkey fan. Howey dropped the bird at 9 feet as it came under a fence. This bird, one of the numerous gobblers Howey took when hunting in seven different states using a gobbler fan from previous spring hunt. (Gary Howey Photo)

The only cover we had to backup against were a few shorter broadleaf trees growing along the edge of the thick cedars.  We needed something to back up against or into, allowing us to blend in, so we would not silhouette ourselves against the skyline.

We set out our Dakota Decoys, a Jake and a hen, hoping a gobbler would see the decoys, zero in on them, giving me an opportunity to bring up my shotgun to zero in on the bird. This location gave us some, but very little open area where we could spot the incoming turkey. It was all we had, so we made the best of it, waiting patiently for a gobble or a bird to come in.

Toms may or may not gobble and at times will simply walk in, turkey hunters needs to be alert, keeping their eyes open for that gobbler that comes in without a sound.

Our plan was to stay at each set up at least twenty minutes and if hearing or seeing no response, relocate to another area.

After the first set up drew no response, seeing no alternative, we relocated a few yards north to the only other cover available two scrub cedars, thirty yards from the north pasture fence.

After letting the noise die down, my partner made a call, after hearing no response called again.

Then it happened, a bird gobbled off to our right, I moved as far right as possible, my chair tight against Larry’s, which meant in order to take the shot, I needed to shoot over the top of him, which was not an option.

Then, there was movement along the brush-lined fence line, with a hen appearing as she moved east away from us, then the gobbler appeared as it worked its way east, keeping a close eye on his hen.

We called; the bird fanned out, appearing to be a mature gobbler, but because of the brush along the fence line was unable to see the decoys, ignored us and moved off, trailing behind the hen as they moved away from us.

The only chance I had was to put a sneak on the bird, cutting the distance between the gobbler and us. I whispered to Larry that I was going to grab my turkey fan and head to the fence line with hopes of using my fan getting the attention of either bird, bringing them back towards us.

Crawling over the top of Larry, through the brush, I reached an opening along the pasture fence line as the gobbler disappeared along the north side of the next group of cedars.

Giving out a call, I waved the turkey fan a couple of times out into the open, looked between the opening in the fan, to see a very angry gobbler, believing another Tom had invaded his territory, charging in the direction of the fan, ready to kick the tail feathers out of my fan.

I dropped the fan, brought up my shotgun as the gobbler unaware of the hunter, which was setting in the open, his shotgun aimed in its direction.  The angry gobbler kept coming, looking for the new Tom, invading his territory.

The bird was just three yards from me, coming hard, ducking under fence that separated the gobbler from me, when I fired, knocking him backwards as the bottom part of my twelve gauge six shot pattern stopped him cold, ” I swear it was self defense” as if I had not taken the shot, in one short second it would had been spurring, pecking and beating me with its wings!

The gobbler was in attack mode, not caring about or even seeing me as its mind was on one thing, driving this make believe gobbler out of the area, keeping it away from his hen.

It happened so fast that Larry had no time to turn in my direction, he heard the shot and asked, “did you get him” my response,” you bet” as we  close Larry and my 2018 spring turkey season.

It was a big gobbler, looked like a three year old Merriam cross gobbler, twenty-two plus pounds with eight-inch beard, one, one and a quarter spur and another one-inch spur.

I still need to find a time when Dylan is not busy with track to find a good gobbler for him to tip over and tag, then all of my 2018 Nebraska spring turkey season will close!