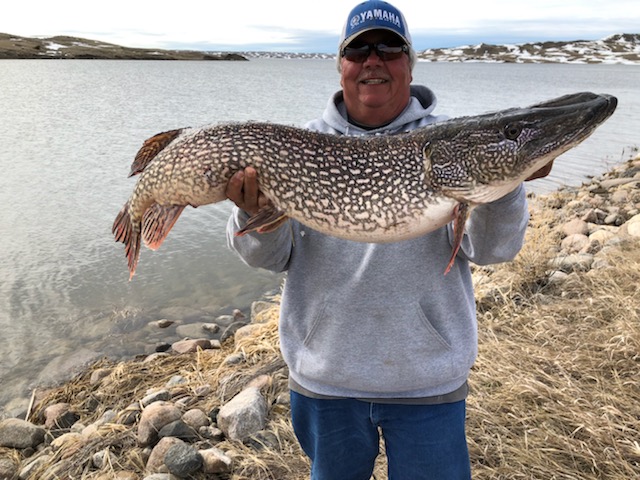 If you grew up in northeastern South Dakota as I did in Watertown, the first fish you tangled with and probably lost was the northern pike, the Sioux River just a block from our home and numerous other bodies of water in the Glacial Lakes area had excellent northern numbers.

When I say we lost when battling a pike, was because of their razor sharp teeth and gills and the ferrous nature of the fish, which severed our lines, with the fish escaping with one of the few if not the only spoon in my tackle box.

Northerns are excellent eating, when cleaned properly in order to avoid the many small “Y” bones found in the fish, you will find this method included at the end of this column.

Back then, we ate all the fish we caught, gutted and scaled them, where Mother would then fry them up for dinner. When having northerns for supper, she would always make sure we had a piece of well-buttered bread next to our plates to wash down one of the pike’s bones that could become stuck in our throats.

The majority of the northerns we caught were in the 4 to 5 pound class, but in the spring, you may tangle with the larger females those weighing over 10 pounds that came into the river to spawn.

Northerns, hit hard, like a freight train, are a powerful fish and give even the most experienced angler all they can handle before bringing them into the boat or having them break off.

Unfortunately, northerns have several less glamorous names, including gators because of their numerous sharp teeth, hammer handles, their elongated bodies and snot rocket, because of the enormous amount of slime on the fish’s body.

They have a slender elongated olive green body with darker splotches that fades to a yellowish color along their belly and a flat snout equipped with some of the nastiest teeth anglers ever seen.

These fish can and do grow to enormous size, with the International Game Fish Association all tackle world record northern, one taken in Germany in 1986, tipping the scales at 55 pounds.

Northerns spawn in the shallow weeds during spring as water temperatures reach at least 49 degrees, with the female deposits her eggs on the submerged vegetation while the male fertilizes them, and then both the male and female abandon them to hatch on their own.

Not all of their 30,000 plus eggs on the vegetation will hatch, but those that do, hatch in 2 weeks. Then for the next week or two, they feed on their egg sack until it’s gone, then like most species of fish feed on zooplankton, later as the dominant predator feed on all sizes of fish as well as other aquatic species, at times those nearly as large as them.

They grow quickly their first several years, reaching maturity in approximately 4-years and because of their aggressive nature do not live that long.

Northerns take up residence in the weeds, are ambush feeders, lying motionless for long periods, waiting for lunch to come by. Northerns need a lot of food each day; they are not fussy eaters, attacking anything that moves, fish, frogs and even waterfowl.

When frightened or in pursuit of a meal, northerns can quickly reach speeds up to ten miles per hour.

You will find them in numerous bodies of water including, streams, lakes and rivers and in the spring they prefer the shallow water near the shore in the dense weeds.

When water temperatures warm up, they head out into deeper water looking for conditions that are more favorable.

In the early spring, northerns look for warmer water temperatures to spawn, look for them in the shallow water or dark bottomed bays as these locations warm up quickly.

Large bait rigs such as the Northland Quick-Strike Predator Rig suspended below bobber baited with smelt account for many of these pre-spawn northerns.

When fishing for northerns, be sure that your reel drag is set properly, if not, the fish will bust your line on its first charge.

You will want to us a leader of some sort when fishing for pike and it is not a bad idea to use one when fishing for other species in waters inhabited by these fish as their sharp teeth can quickly break even the toughest monofilament line.

If fishing from a boat, begin fishing along the edge of the weeds in shallower water, pike spend a lot of time in ambush in the vegetation.

Shore anglers do well casting into the vegetation along the shoreline, that lies just under the water or by fishing the open pockets in the weeds.

As soon as your baits splashes downs you’ll want to raise your rod tip high and start retrieving your bait quickly in order for it to stay on or near the top of the water and not become entangled in the weeds.

Northerns will come up out of the weeds to take surface baits, for this type of fishing, I like a buzz baits like the Northland Buzzard Buzzer.

Once hooked, northerns bury themselves in the weeds, and then, you not only have to tangle with the fish, but you also have to drag them up through the weeds.

when northern strike, you will need to rear back on your rod hard to drive the hook into the bony part of their mouth, then holding your rod high crank hard to pull the fish up and out of the weeds.

When you land them, be very careful, the hooks dangling from the northerns mouth, their sharp teeth and gills can do a lot of damage when the fish is flopping around.

Do not think just because you got the fish to shore or to the boat that they are worn out and going to simply lie there exhausted, as northerns, once landed begin to jump around and spin and if you’re not cautions, one of the hooks, the northerns sharp teeth or their sharp gill plates can cut you up badly.

The best way to remove the hook from a thrashing northern without being gashed is to grab the hook with your pliers and twist as the movement of the fish and the force of the pliers holding the hook, generally allows the hook to come loose.

When it comes to getting the most meat from a northern and not having too many Y-bones in your fillets, there is a simple method to cleaning northerns; below you will find how most anglers clean the fish. If you have not filleted them before, it may take a few attempts and a little practice before you get it right.

* First, before doing anything, make sure you have a very sharp knife; I use a 6-inch or longer bladed knife, depending on the size of the fish.

* Place your northern on a hard surface with its belly down and cut downward right behind the head until you run into its backbone.

* If there are bones left behind, use your pliers, a knife or your fingers, to remove any remaining bone.

* To remove the side fillets, slide your finger to feel Y-bones that are protruding from the top of the fish. Use these bones for guides as you cut away the side fillets.

* To remove the side fillets, turn the fish on its side, cut in behind the head, using the Y-bones to guide you, without cutting into them. To do this, keep your knife flat with the cutting boards for a clean fillet, cut down, coming up with your knife as your get to the dorsal fin.

* Check for any bones that remained by running your finger along the fillet, these bones can be removed easily with a pliers or your fingers.

* Flip the fish over and repeat the last step, then skin out the fillets by sliding your knife under the skin while holding the meat, run your knife to the end of the fillet, removing the skin.

* If your fish is large enough, there may be an additional smaller fillet behind the dorsal fin out to the tail.

Northern pike are the main predator in most upper Midwestern bodies of water and very aggressive, they fight hard and when cleaned and prepared properly make for some excellent eating.
These nice solid white fillets fry up nicely and once prepared and if served with walleye fillets, you will find that most anglers will not know the difference.

Gary Howey, a 1968 Watertown, S.D. graduate, now residing in Hartington, Neb. is a former tournament angler, fishing & hunting guide, an award winning writer, producer, photographer and broadcaster, a recent inductee into the “National Freshwater Fishing Hall of Fame” in 2017. Howey is also the Producer-Co-Host of the Outdoorsmen Adventures television series and Outdoor Adventures radio. If you are looking for more outdoor information, check out garyhoweysoutdoors.com, like Gary Howey’s Facebook or watch his shows on www.MyOutdoorTV.com