The coyote sat on the ridge line for a very long time. He looked like a tiny dot highlighted against a graying sky.

The dog was looking for that dying rabbit he had heard, but he wasn’t going to rush headlong in.

“This one is going to try to circle around me,” I thought.

And then he began running down the hill. At about 400 yards out, he began angling towards my right. The wind was blowing across to my right. It wasn’t much of a wind, but he’d scent me for sure when he covered another 100 yards.

Then he ran behind a little rise, and I never saw him again.

That’s coyote hunting. There are coyotes, I believe, that will never be killed by a caller. But there are plenty of others that can be.

That’s why, when the temperature drops below zero and a few inches of snow finds its way to the ground, I began to think about digging out the calls and winter camo.

Calling coyotes isn’t particularly difficult. Here’s how we go about it.

I prefer to call right at dawn. It seems coyotes are still moving about after a night of hunting and are more willing to come in. However, they can be called with success all day long.

The equipment you need is not very extensive. Let’s look at guns first. Any rifle you have right now will work. If you plan to sell the pelts, the smaller calibers will cause less fur damage. The .204 Ruger is favored by coyote hunters who are trying to minimize pelt damage. A .223 is a common caliber. It has enough reach and won’t do a number on the pelt. Probably the all-around favorite for a predator round is the .22-250 Remington. It’s a fast round that will drop coyotes out to 400 yards and beyond. I use a Ruger M77 in .243. It’s loaded with ballistic tipped 55-grain bullets. It’s heavier than the other calibers, but not many coyotes run off after being hit with the .243.

However, you can hunt coyotes with any caliber you want. If fur damage is not one of your considerations, any centerfire cartridge can be used. And don’t overlook shotguns. We carry a shotgun on every hunt because we’ve had several occasions when we didn’t get the coyote because he was too close when we spotted him.

I used to hunt with a Harris bi-pod attached to my rifle, but I now use a pair of crossed shooting sticks or a monopod. They are more versatile.

When there is snow on the ground I use white camo and my gun is wrapped in a white camo sleeve. Your face mask should be white as well as your cap. If there is no snow, your camo should match the conditions where you will be hunting.

It’s probably easier for a beginner to the sport to use an electronic caller. Get one with a remote control so you don’t have sit right beside the box. Often coyotes will get conditioned to the dying rabbit sounds most callers use. With the electronic call you will have a lot of options such as woodpecker sounds, deer bleats, etc.

When it comes to mouth calls, there are lots of choices. I have both cottontail and jackrabbit calls. Cottontail calls work best in wooded areas, but out in the open I prefer the louder, coarser call of the jackrabbit. I sometimes carry a deer bleat call that I can make sound like a fawn in distress. To coax a coyote in closer I carry a squeaker.

I also carry a coyote howler. Howling works throughout the year, but it is especially effective during February when the dogs become very territorial because of breeding. We’ll save coyote howling techniques for another column. It’s definitely something you will want to add to your predator hunting bag of tricks.

The other thing you will need is some kind of seat. I use the same collapsible chair I use for turkey hunting, but any of the turkey hunting pads or seats will work. You just need something that will keep you dry and comfortable.

Picking a calling site is the most important choice you will make. Preferably it should be elevated to give you a commanding view of the area in front and to both sides of you. Also you will need a background to sit against such as a yucca plant or cedar tree. The wind should be blowing into your face or to either side of you.

You vehicle should be out of sight. We usually park and walk in at least a couple hundred yards. 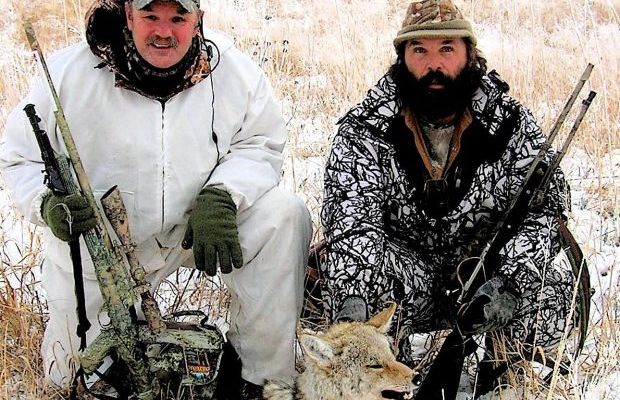 When I get set up, I usually sit there five or ten minutes, just letting things calm down. I want to make sure that I am comfortable because I will be sitting there without moving for at least a half hour.

I know it is often recommended to move after 20 minutes of calling with no results, but I’ve found that in our area a coyote often comes in later. If I’m in what I think is a really good spot, I’ll call for 45 minutes.

My first series of calls will be as quiet as I can make them and still have the call work. If there’s a coyote close by, I don’t want to blow the fur off of him with a loud blast of dying rabbit. Two years ago we had one that had to be laying up within 50 yards or less of us in a wooded ravine. He popped out and ran within about 10 feet of my two companions and neither got off a shot before he ducked back out of sight.

I’ll usually call, then wait a minute or so and begin another sequence. After about 15 minutes into the set, I’ll rack up the intensity of the calling. I want it to sound as if the rabbit is fighting for its life and will add even a few growls to the call.

After about 10 minutes of that, I’ll revert to a quieter series. And make them more quiet each time until it is time to leave the stand.

That’s my calling style and I guess everyone will develop his own tempo and sequence as they get more experience.

Predator hunting is a lot of fun, but shooting a coyote is no slam dunk in our area. They get pressured quite a bit and are the most wary animal out there. When one does come it will start your heart pumping a lot faster.

← Prev: Attracting New Game Animals Next: Do the Change Up When fishing is slow! By Gary Howey →