It will not be long before the upland Game Bird season opens up. Several of the states are reporting that their pheasant numbers are down.

I have talked with several wildlife biologists about this and they have given several reasons for the decrease in pheasant numbers.

First is the fact that in some areas, they had dry year and moisture, the dew that the young chicks needed was hard to come by.  Secondly was the fact that last season’s numbers were also down.  Lastly, but probably the most important reason is the fact that much of our CRP had disappeared. When commodity prices were high and the dollars the government gave per acre for taking the fields out of production, into CRP were low and much of the CRP plowed under.

Without the habitat, we just are not going to see the bird numbers others and I saw while growing up in Watertown, South Dakota during the “Good Old Days.”

The reason that South Dakota has birds is simple; they realize the thousands of dollars their State bird, the Ringneck Pheasant brings into the state’s economy.

South Dakota definitely have more habitat than Nebraska, the state I reside in and In Much of South Dakota; they farm for pheasants taking care of what habitat they do have.  They do a number of things to enhance the habitat, making it more attractive to wildlife.

In South Dakota, you will see sloughs; some hold water while others are no more than muddy swamps.  When they plant trees, many of them are specifically suited for wildlife. Many farmers will leave a few rows of corn or sorghum in the field each year, helping wildlife to survive during the harsh South Dakota winters.  This habitat helps to assure that the birds have cover to protect them from predators flying overhead and the food and cover needed to make it through the long winter months.

This, along with the fact that game preserves stock birds heavily helps to ensure good bird numbers during the season.

Some folks have the misconception that pheasants can live in the row crops, the corn and bean fields.  Maybe, in years past, but not today as the row crops no longer have pigeon grass and weeds between the rows, they are clean.  Sure, pheasants will move into them to feed before harvest and on what little waste grain there is after harvest, but row crops do not cut it for wildlife habitat.

In areas where there was dry weather, successful hunters this season may have to hunt areas adjacent to water.  It really does not have to be much, as a small slough, creek, or pond will work.

Another tip that is worth listening to is to hunt the smallest tracts of land, patches of weeds etc. The larger CRP fields or state hunting grounds are hunted hard.  As soon as one group comes out one end, another group is heading in the opposite end of the field.

Most hunters tend to pass up these small weed patches or small clumps of trees.  These places can really hold good numbers of birds, those pushed from the larger fields, find safety, and shelter in these small tracts of land.

It does not take a Rhodes Scholar to figure it out, many of the larger tracts of land are hunted hard and the birds are looking for a place to rest and get away from all the noise and shooting.

You do not want to pass by even the smallest patch of cover.  As long as a bird can lie down in it, it is big enough to hunt.

Another thing that I have learned over the years when it comes to hunting pheasants is that we hunters have a tendency to move through the field too quickly.  You will bag more birds by walking slowly, taking your time and stopping from time to time.  If you aren’t hunting with a dog, you’ll kick up more birds when you zig-zag, to not walk in a straight line as you’ll cover more ground and force the birds that moved to the side of you as these birds think they have out smarted you. However, when you hunt a field this way, it spooks the birds, thinking they have been located and will take wing. 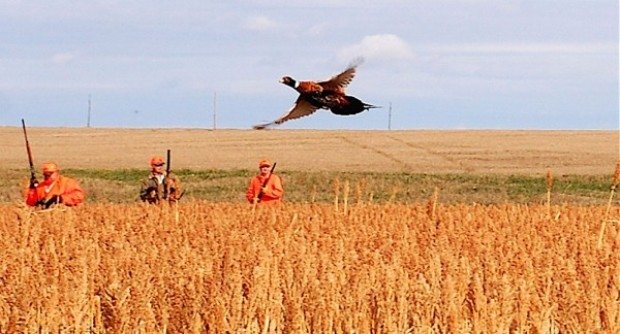 Who can forget the beautiful colors and cackle of the rooster pheasant as it explodes from the cover? It may have been a year ago, only a memory, but one that all pheasant hunters love to picture in their mind. In a few weeks, they have the opportunity to hear it again when they head to the field to take part in the 2017 pheasant season opener.

When hunting with dogs during warm dry conditions you will need to work slowly through a field, allowing the dog the extra time needed to locate the birds.   Dogs need a little moisture in order to pick up a bird’s scent and when it is dry, it takes a dog longer to pick it up. Take your time when you go through a field as this allows the dog time to work the area thoroughly. You will be surprised how many birds he locates that you would have walked past by moving through the field too quickly.

Numerous times, when I called my dog back to hunt out in front of me, thinking I knew where the birds were, only to see a bird burst from cover after I have pulled the dog back away from it.

My Lab MO JO taught me a lesson one of the first several times I hunted with him, when for some unknown reason; I thought I knew more than my hunting dog.

We were in one of those big CRP fields, several friends, and I with all of us hunting with dogs.

I was on the right wing with my dog out in front of me; he kept coming out of the CRP and working along the clean edge towards a small tuft of weeds. I thought he did not want to work his way through the heavy cover and pushed him back into the CRP.

As I approached the corner where the weeds were, MO JO locked up and started moving slowly towards the tuft of weeds. As I cut the distance between Mo and me, he poked his nose into the weeds and three roosters erupted into the air, catching me, by surprise.

From that point on, no matter how silly it may seem or what direction he went, I followed my dog letting him lead me to the birds.

Another problem that early season hunters are running into is that the birds are running, flushing out ahead of the hunters. By having wingmen out to the side, slightly ahead of the walkers and posting blockers on the end of the field, you will solve much of that problem.

If you hunt late season or in smaller groups, you might want to consider using a heavier load.

Some hunters start the season with a six shot and when the birds start flushing wildly may switch to a heavier load.  I have found that my shooting improves when I shoot five shot throughout the season.  Not only am I shooting a heavier shot, I am shooting the same load all season.  Some loads pattern different in one shotgun to the next and by shooting the same load all season, you learn the limitations of your shotgun and become a more consistent hunter.

To me it really does not matter if I bag my limit, sure, I like to eat pheasant, but to me it is just getting away from it all with friends and enjoying the great outdoors.

Good luck on your next hunting trip!

← Prev: How Often Should you Check your Game Cameras? Next: The Primitive Fish of the North The Lake Sturgeon Gary Howey →