The Primitive Fish of the North The Lake Sturgeon Gary Howey

The Rainy River located on the Minnesota Ontario Canada border flows into Lake of the Woods with both the river and the lake premier destinations for anglers.

I was one of several hundred outdoor communicators that made their way north to attend our annual Association of Great Lakes Outdoor Writers (AGLOW) 2017 conference held on Lake of the Woods.

They keep us quite busy at the conference, but there was still time for several side trips including sturgeon fishing, walleye fishing, grouse and waterfowl hunting.

Since I had never fished for Sturgeon, I was looking forward to tangling with one of these primitive fish that inhabit the waters of the Rainy River.

Lake Sturgeon, are one of twenty-five species of sturgeon found in North America. They are a prehistoric looking ancient bottom feeder. Their skeleton is primarily made up of cartilage. They are streamlined with their armored coated body having rows of bony plates on both sides and their back and when not handled right cut like razor blades.

They feed using its elongated snout that has taste buds on and around its lips which protrude down from their head. They, like catfish have  barbells coming down from their mouth, which helps them to locate food.  Their main diet is made up of insect larvae, worms, leeches and other small organisms it picks up from the muddy river bottom. 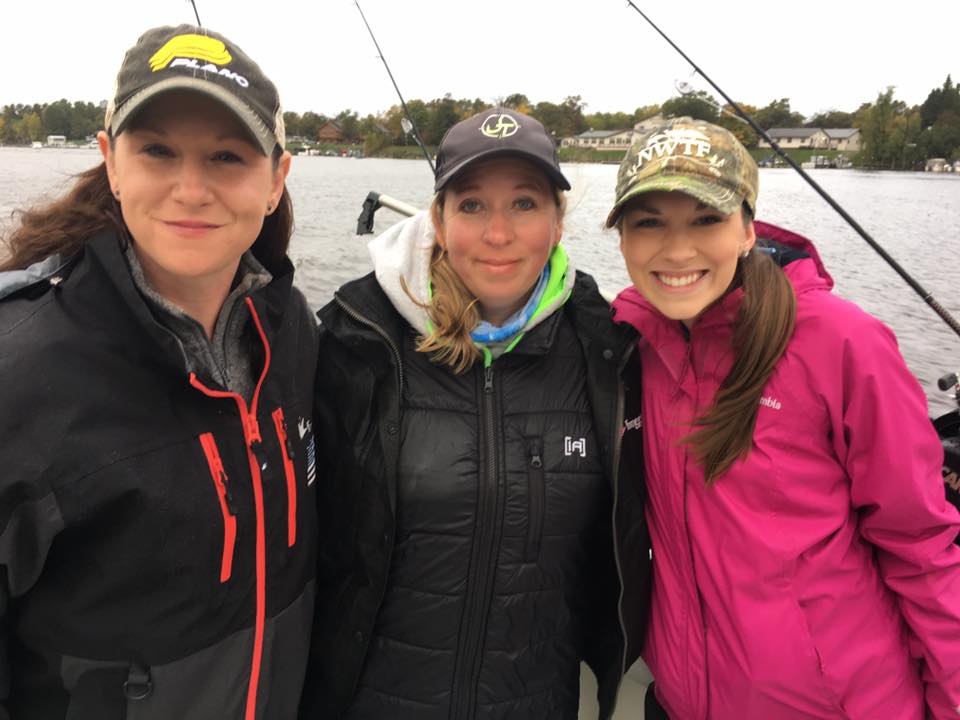 These young women Kristen Monroe, Jody Rae Anderson and Catelyn Folkert were my fishing partners as we pursued Lake Sturgeon on the Rainy River.

Joining me on this trip, would be three lovely young women, two outdoor writers, Kristen Monroe, from Wisconsin and Jody Rae Anderson from Minnesota along with  the digital media specialist for the National Wild Turkey Federation, Catelyn Folkert from South Carolina who was making her very first fishing trip.

As we backed away from the docks our guide, Brent Fredrickson indicated that our boat ride would be a short one.  Several minutes later, we arrived where we would anchor and fish . He was correct about not being too far from the docks as we could easily see the docks  where we had just launched.

Our fishing time would be short, as we had  but three hours to fish because there was a full schedule at the conference.

Brent informed us that he knew several spots where sturgeon could be, but could not guarantee the fish would bite.

It was a cold and dreary day, with drizzle and a gusty wind making it quite a chore to stay warm, but we were bundled up and anxious to see if we could pull one or two of these prehistoric fish up from the muddy bottom of the Rainy. We all knew, once we had a fish on, the cold and wind would not bother us at all.

On this trip, our gear would be Abu Garcia bait casting reels spooled with twenty-pound line partnered to 6-foot Shakespeare Ugly Stik rods, light if one of us would have to hook into a big fish that could be up to 50 inches long,and a very good shot at fish up to 70 inches which could weigh 90 to 100 pounds.

It didn’t bother me as I was not worried as I had excellent anglers with me, who along with our guide were coaching Catelyn who soon would be an experienced angler.

Our twenty-pound line was rigged with three-ounce No-Roll weights and a large circle hooks that we baited with night crawlers along with several frozen shiners.

Sturgeons are bottom cruisers that feed in the mud along the bottom and the bait we used was what they were after as it did not take long before I felt a tug on my line, as I brought the rod up, it shook violently as the fish did everything in its power to stay tight to the bottom and was giving me quite a  tussle.

I would gain on the fish, then it would dive towards the bottom, with this scenario going on for quite a while before the twenty-four inch, sturgeon came up to the boat and was netted.

If this smaller sturgeon, which put up quite a battle, fighting hard to stay in contact with the bottom, a larger fish would test both our anglers and our equipment.

As my fish came into the boat, Kristen set the hook on another, it too put up a good fight and when netted was a bit larger than the fish I landed.

It was not long before Jody hooked into another and then it was Catelyn’s turn. It was a hard fought battle, but there was no doubt that she was in charge as she boated her first fish. By the smile on her face and as her “I caught my first fish”, echoed across the river all aboard thought that this would be the first of many fish she would catch.

On this short trip, we boated eight sturgeons up to twenty-seven inches all released, with all aboard happy to have had this opportunity to fish for these fish. 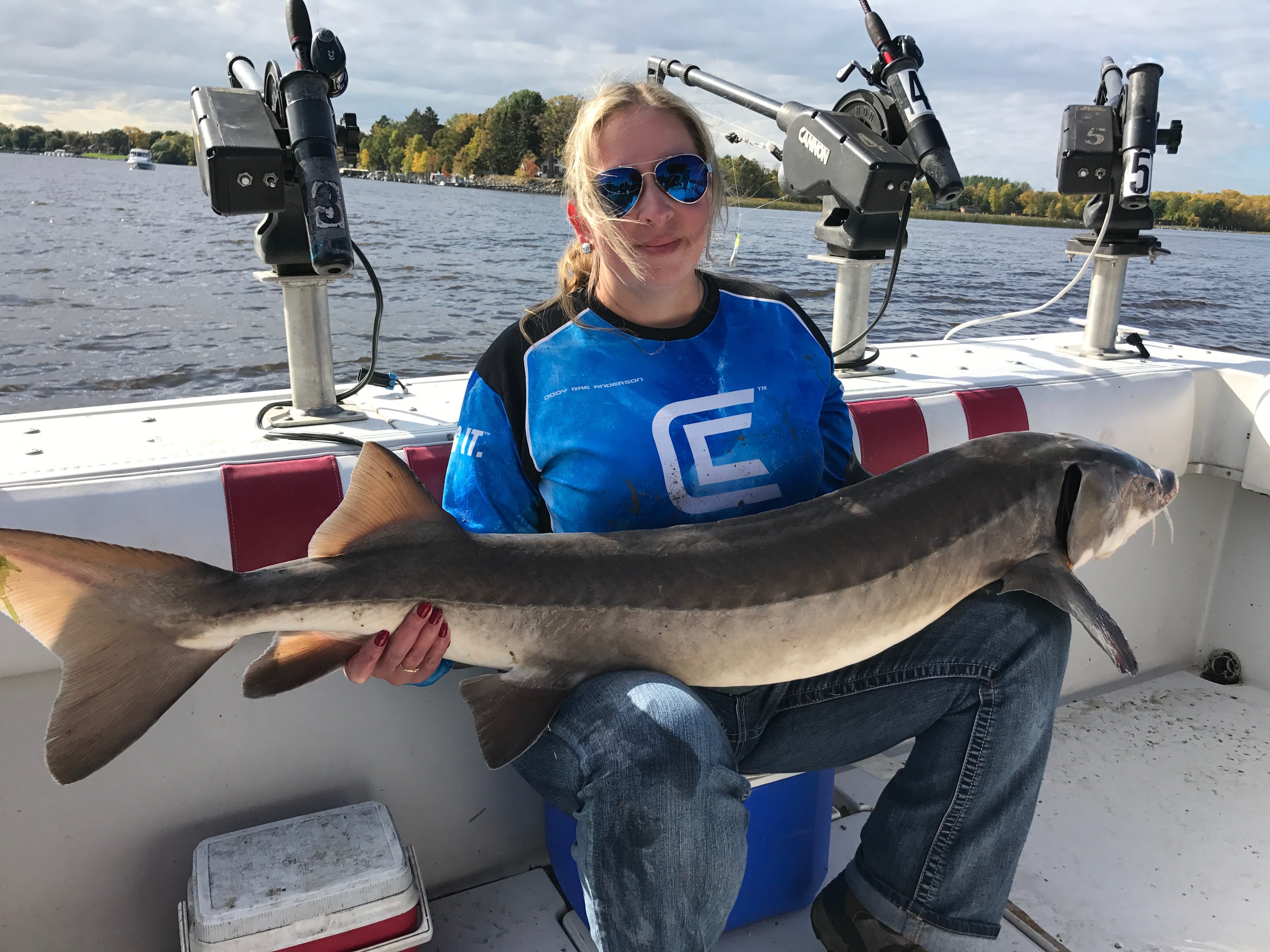 Jody Rae Anderson holds the 57-inch Lake Sturgeon she landed on her second day of fishing on the Rainy River in Northern Minnesota.

The following day not to be outdid, Jody Rae landed one of the largest sturgeons of the AGLOW conference a nice fifty-seven incher.

Because of the Minnesota and its neighbor’s rules and regulations, the sturgeon of the Lake of the Woods and Rainy River are making a comeback.

With the help of the Minnesota Department of Natural Resources and concerned anglers, these fish will continue to prosper in the Rainy River and Lake of the Woods giving other anglers the opportunity to tangle with one of these primitive hard fighting fish.