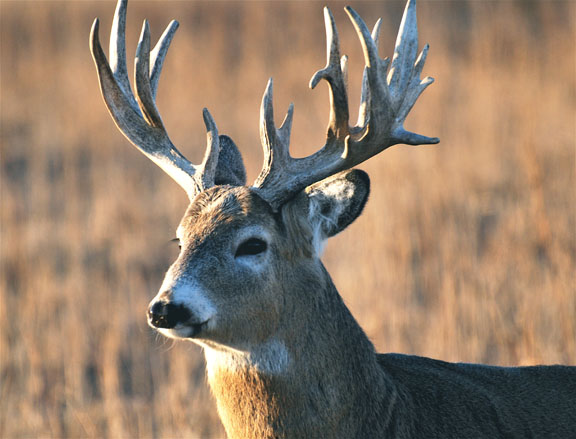 By doing some Pre-Season Scouting which should include Game Cameras, you may have the opportunity to tag a buck like this one that showed up on this Game Camera.

Have you ever noticed how some hunters can be a whole lot more successful that all other hunters that hunt in the same area?

If you ask a dozen of these hunters why this one individual or Top Gun is so successful, you’ll probably get a dozen different answers.

Some may say that it’s because he has better habitat and then there’s those that might suggest that no one can be that successful year after year and hunt legally.

The majority of the hunters may not have a clue, figuring that someone got lucky and continued hunting as they always have and continue to have limited success.

Once a few of these hunters do their homework, they’ll figure out what they need to do to become as successful as the Top Gun is.

The homework I’m referring to is “Pre-Season Scouting” or getting out into the field prior to season so you know what’s out there, their favorite location throughout the day and their travel routes.

Some of you might think that scouting is only for deer hunters, not really as a hunter who gets out into the woods or field before season is way ahead of the game when it comes to opening day.

Let’s break it down by species and see how scouting will give you one up on the hunter that simply goes out on the first day of the season.

Dove hunting is a great sport, but without doing some sort of pre-season scouting, and once the season opens, you’re going to do a lot of running around looking for places to hunt which means you’ll have a lot less time for hunting doves.

Before the season starts, my hunting partners and I are looking for large concentrations of birds. We look for them sitting on high lines, around dams or a food source.

Generally, in the area where doves roost or nest you’ll find power lines, and there’s nothing doves like better than to rest on an elevated area, allowing them to look things over. Therefore, if you spot a group of doves close to a tree line, it’s a safe bet that that’s where the birds roost.

Searching out areas where the dove feed is another place you need to check out. Doves love wheat, hemp and ragweed seed, but will make use of any seed they can get their beak around. If there is a harvested wheat field or a weedy draw that contains hemp or ragweed, you can bet that sometime during the day, doves will be in the area will be there filling their crops in these areas.

Water is what every creature needs and doves after feeding when they are on their way to their roost will have to stop by some dam or stock pond to get a drink before calling it a day. You’ll want to look for a pond that has a bare shoreline as doves need to walk down to the edge of the water to get a drink and will avoid ponds with weeds growing right to the water’s edge.

If you find a pond with a bare shoreline near what the birds are feeding on as they make their way back to their roost, you best be set up late afternoon just before the sun sets as the birds will be coming to you.

With the increase in the CRP acres, there should be more birds around this fall and with a little pre-season scouting, you’ll know what habitat holds the largest number of birds.

If you had the opportunity to work your dog in the late summer and early fall through some of these acres, you should have a pretty good feel as to the numbers of birds that are there.

I like to drive the country roads scouting the area on damp mornings, as this is when you’ll see the birds in the open along the edge of the road, on hay bales or in a harvested grain fields looking for a place to get out of the wet grass and dry off.

I get a lot of my information on pheasant numbers by talking to area farmers who may have seen birds while cutting their alfalfa or in their field as they can help you to narrow your search, giving you important information on which field to start hunting on opening day.

I start my scouting in the spring when I’m turkey hunting, keeping an eye out for deer trails and tracks, this along with what I learn from my game cameras I have placed along deer trails and in food plots I have throughout the property gives me a pretty good indicator as to what I can expect this season.

Once the crops start coming out, late in the day, I’ll use my binoculars and spotting scope to glass the fields and areas deer have to cross to get from their bedding to feeding areas.

As it gets closer to the opener, when I check my game camera, foodplots and mineral licks, I look for rubs, scrapes, and other signs of deer activity.

Once the season is open, this pre-season scouting puts the odds in your favor, as you know what deer are on the property you are hunting, where they bed and where they feed.

No matter what game you’re after, by spending some time doing some pre-season scouting, you’ll have a good idea as to what the bird and game numbers are and where to hunt on opening morning.

← Prev: HARVESTING NATURE-Venison Pizza Rolls Recipe by Cayla BendL Next: Late summer basin’ means getting into the slop and rooting with the hogs By Larry Myhre →