Pre-spawn bass fishing best of year By By Larry Myhre

I watched the big single spin spinnerbait coming through the shallow water of the upper reaches of the Iowa farm pond. The big Colorado blade was pulsing and sending out flashes of chartreuse as the colored blade pumped through the scattered stick-ups and emerging weeds.

Suddenly the shallow water boiled with the strike of a big largemouth and I saw the broad side of the fish as he turned, the spinnerbait hanging from his mouth.

I lunged back hard on the rod, and felt the weight of the four-pound fish. As the brawling bucketmouth continued his powerful lunge, the rod bowed, and my forearm began feeling the pressure. I was glad I had spooled the casting reel with 15-pound-test line.

My drag was screwed down tight, so there was no give. You don’t give line to largemouths in shallow water. It’s a tug of war, no holds barred. The fish turned and began running broadside, the line picking up trash from the water and accentuating the pressure.

If you are going to land these fish, you have to be in control. I lifted the heavy tip of the medium heavy rod and pulled the bass’s head out of the water, and began cranking it in like a water skier behind a boat.

It lunged between my wader-covered legs but I pulled back and grabbed its lower lip and hoisted the fish from its watery sanctuary.

With a quick twist I pulled the hook out and admired the heavy, egg-laden female. I put her back into the water and sent her on her way. In a couple of weeks, she’d build a nest, lay her eggs and pass on her genes to the next generation of bass.

In our local area, my first choice for location would be a farm pond. As we move farther north, the choice would be glacial lakes in both South Dakota and Minnesota.

Farther west would be farm ponds in Nebraska and South Dakota, but small lake impoundments such as Buckskin Hills and Powder Creek should not be overlooked either. Neither should Iowa’s county conservation board lakes.

When you come right down to it, most of the waters in our three states contain largemouth bass. So, they are a gamefish that is available to just about everybody.

There are a few guidelines to remember when pursuing early largemouth bass. One, think shallow water. Two, think warm sunny days. Three, fish like you are trying to bag a trophy whitetail buck. In other words, quietly, carefully and keep out of sight.

I wear hip waders when fishing from shore because much of the time I am on my hands and knees, and you just stay drier. When I get close to the pond, I drop down to my hands and knees and carefully work my way to within 30 feet or so of the water. Then I make my first cast. As I fan cast the area in front, I begin easing closer and closer until I am kneeling at the water’s edge. Then my casts parallel the shoreline on both sides of me, with the casts, depending on the water’s depth, no more than 10 feet off the shoreline. If I’m in the shallow, upper end of the pond, I’ll fan cast all the way across because all of the water there will be shallow.

There is really no “best bait” for this early fishing. Usually you want to cover a lot of water and that is done best with a spinner bait. In recent years I’ve begun using a chatter bait quite a bit. These are very effective lures and, like a spinnerbait, relatively weedless.

For spinner baits, I prefer a single spin with a large, fat Colorado blade. Singlespins can be cast much more accurately than a tandem-bladed bait and that can be important if you are casting to brush or stick-ups. White, chartreuse or black, or combinations of those colors, are very effective in both spinnerbaits and chatter baits. 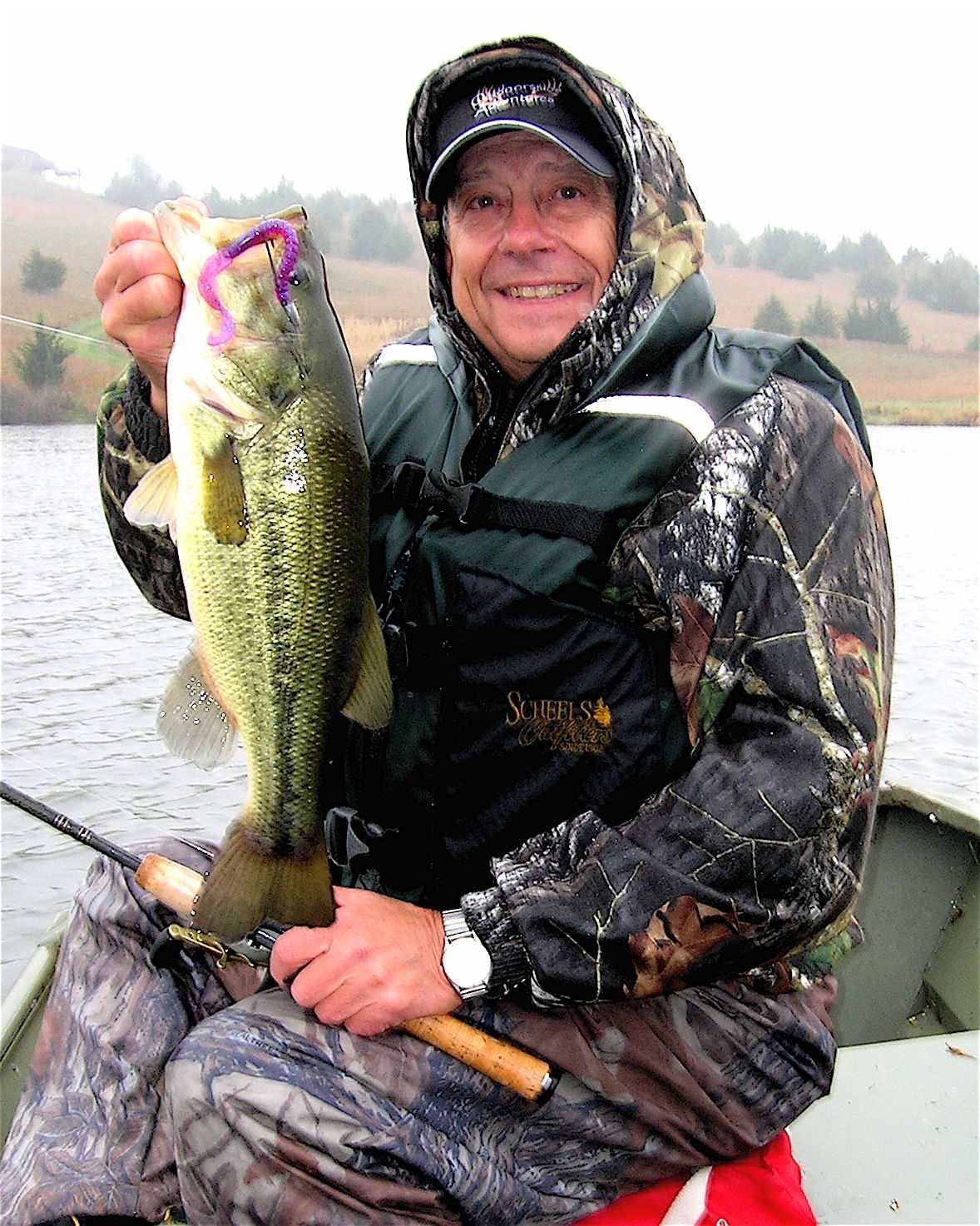 When using these baits, always attach a trailer. Usually that can be a plastic crawdad, twister tail or twin-tailed trailers made to order for these baits. The extra action and bulk these trailers provide will result in more fish caught.

Swim jigs are also very effective at this time. I prefer light ones for this shallow water fishing. That would be a quarter-ounce or 3/16th-ounce bait. I’ll attach a fairly big trailer like a Havoc Craw or something similar to provide casting weight and bulk. Fish the jig with a swimming action, not unlike the retrieve with a spinnerbait.

Texas-rigged plastic worms are another option. I’ll peg the sinker, usually one quarter ounce, to the eye of the hook and cast and swim retrieve the bait. Best colors are usually purple or black.

Wacky worms are another option.

When fishing natural lakes, you’ll want to look for cover. On any given lake, that might be rocks or emerging weeds such as cabbage beds or reed beds. These plants grow on the kind of bottom that bass like to nest upon. So they will be there late in the pre-spawn period.

Crankbaits and jerk baits will come into their own during this time as well as the spinners, worms and tube baits. Also, try a 1/16th-ounce jig head and 4-inch plastic worm. Bass also love that combination.

All the presentation choices aside, there is one thing you can take to the bank when fishing bass in shallow water. They will bite anything. Maybe that’s why I like spring bass fishing so much.

← Prev: "ICOMOLD" Helping Quik-Load Get their Product to Market Next: In the Weeds and Wood for Bass By Gary Howey →