Predators Come in all Sizes By Gary Howey

I have had numerous questions about predators; those furred critters adored by some and detested by others, they can become a big problem for man as well as being beneficial to him and the environment.

I am not an expert as once you think you are there are many people out there that can prove you wrong. What knowledge I have about the outdoors, its animals and the environment I gained by spending years studying and hunting wildlife.  What I was unable to learn from Mother Nature, I had to do research, talking with those that know much more than I do, both college educated individuals as well as interviewing hunters, outdoorsmen and women. Talking with those who have more experience in the outdoors, those I consider friends and mentors and whose opinions I respect.

I hope that the information listed below will answer some of the questioned people have asked me about predators that are both large and small.

Predators are an important part of a healthy environment, keeping the balance of nature in check, as too many animals will destroy their habitat, devouring all available food and slowly starve to death.  They cull prey, the old, the sick and young leaving more food for the healthy animals and by controlling the prey populations they help to stop the spread of disease.

Too many of any animal species can be detrimental as overpopulation leads to the destruction of food sources and habitat.

As food sources disappear, animals will herd up on the remaining food sources, which allow any diseased animal to spread their sickness to the entire herd.

Predators come in all sizes, small, medium, large as well as aerial predators. Some of the small predators would be; skunks, raccoons, opossums and badgers

Raccoons will eat just about anything but really enjoys feeding on the creatures in our creeks, rivers and ponds, which include clams, crayfish, frogs, fish, and snails. They also eat insects, slugs, carrion (dead animals), birds, their eggs, fruits, vegetables, nuts, seeds and when living adjacent to people will eat garbage and pet food.

Opossums eat much the same types of food as the raccoon including; fruits, insects, snails, slugs, eggs, mice, rats, fish, frogs, crayfish, carrion and snakes as most snake venom has no affect on opossums.

Badgers, Mother Nature’s digging machine feed on earthworms, insects, grubs, and the eggs and young of ground-nesting birds, small mammals, amphibians, reptiles and birds, as well as roots and fruit.

Medium size predators could be the coyote, fox, and bobcats.

If the populations of predator’s get out of hand, they become a huge problem, needing to be controlled and if man cannot do it Mother Nature takes care of it with the mange, blue tongue and other diseases. 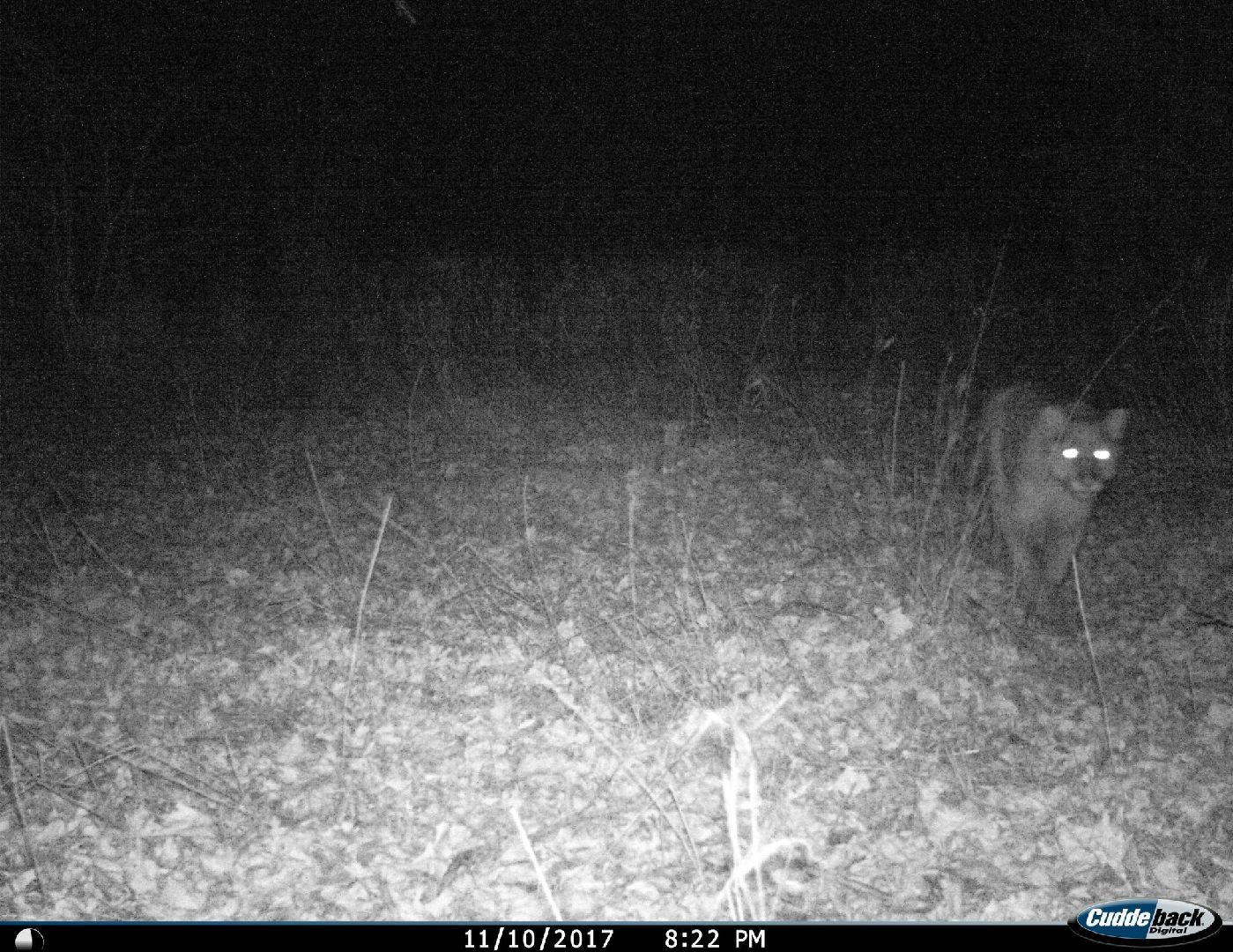 The largest predators in the area are the Mountain Lion, with frequent sightings in the upper Midwest. This animal caught on a game camera in northwest Iowa as it traveled through that part of the state where we call predators. (Game camera photo courtesy of Simon Fuller)

Then there are the big predators, which can be mountain lions, wolves and bears, fortunate for us, the only large predator, which we are seeing more of in many areas is the mountain lion, which travels through our area. They feed on much larger animals including deer and kill a deer about once a week in order to survive. They also feed on coyotes, raccoons, rodents, porcupines and at times livestock.

I have had mountain lions on my game cameras, seen them in land that I hunted and had an experience with one this last deer season.

While filming near Lynch, Nebraska where I had shot a nice mule deer, my camera man let the film run for a short time before swinging to me to talk about the hunt.  When we headed out of the blind, my cameraman glassed the area and there was no deer.

Since it was only fifteen minutes before legal shooting time ended and getting dark, we grabbed our flashlights and headed down the hill. When we got there, we found blood but no deer. My cameraman saw two does going over the hill, thinking that perhaps the buck had got a shot of adrenaline and was with them we headed in that direction.

Because it was getting too dark and we were not familiar with the terrain of the area, we gave up our search until morning.

Back at the cabin, when we looked at the footage on the computer we saw was a mountain lion going up the hill and then dashing across an opening to the trees where the deer had gone down.

The following day three of us, heavily armed returned to the spot hoping to retrieve the deer and not run into the cat. Our search was in vain, as we found blood and drag marks but no deer.

As long as we are talking about predators, let’s not leave out the birds of prey, the aerial predators, the hawks, owls  and other raptors that live or migrate through the upper Midwest, they too are predators, feeding on upland game bird, rabbits, snakes and smaller mammals.

All of these animals affect our wildlife populations as well as our environment, when things are going right; some of these predators are controllable.

When furs were in demand in Europe and Asia, fur prices were high enough that hunters and trappers could make a little money or at least earn enough to pay for their gas.  They helped to control predators, preventing overpopulation and keeping the animals in balance.

Several years ago, fur prices were high and there were individuals going out of their way to trap and hunt these animals for their furs.  You very seldom saw one of these animals lying on a road, as they were loaded up and sold to fur dealers.

Back then, raccoons, coyotes, badger and fox furs brought  top dollar where today, all you could hope to get from a fur would be a couple of dollars with the only hide worth anything would be a prime Sandhills coyote.

It is no wonder, when habitat declines, the land wildlife needs to survive, with less places for wildlife to live, to roost, nest and raise their young, it makes it easier for predators to get to them and their numbers decline.

No matter what you think of predators, love or hate them, predators are important to our environment, but too many of them are detrimental, as if the numbers of prey species that they feed on are eliminated, it affects the entire ecosystem, everything, both living and nonliving.