A little preparation right now can put the odds on your side come turkey hunting season.

And when it comes to hunting these wise, old birds, you need all the help you can get. After all, only one in five hunters fill their tag in Iowa.

It’s been interesting to see how turkey hunting has changed over the years. This will be my 30th straight year in the turkey woods. I’ve shot toms in Missouri, Kansas, Iowa, Nebraska and South Dakota.

When I first began hunting turkeys, everyone was in the woods before the crack of dawn. They’d find roosting toms and then set up as close to them as they dared and begin making quiet hen tones.

By 10 a.m., most of the hunters were on their way home for lunch and maybe watch a game on TV if it were a weekend.

Somewhere along the line, hunters began forgoing the dawn hunt and venturing into the woods at 10 a.m., or later. They learned that their success was greater later in the day when the hens had left the toms and gone to nest.

With the high turkey numbers we have today, there is no shortage of hens. Now hens are roosting with the toms and at fly down, the toms follow the hens, and are reluctant to leave them.

Even though tactics have changed somewhat, it is still important to do that preseason scouting.

There are two things you want to learn. One is where the turkeys are roosting. Two is where they go after fly down. If you are an early morning hunter, you must set up along the path the turkeys take. If you hunt later in the day, you must know where the birds end up at late morning. Once the hens leave them, the toms will remain in that general area for most of the rest of the day.

Turkeys gobble a lot before fly down in the morning and you can locate them that way, or go out just after dark and blow an owl call. They will respond if within ear shot.

The main thing is to do your scouting from afar. You don’t want to spook them because they may change their routine. The more you can learn about them before the hunt the better.

The next important thing before the hunt is to pattern your gun with the loads you have been using. Get some turkey targets and take a shot at 20 yards, 30 yards and 40 yards. Six to ten hits in the spinal cord and head will insure the bird goes down. If you are getting a good target at 40 yards, move out to 50.

The choke in your shotgun is important. At minimum it should be a full choke, but most turkey hunters, myself included, use an extra full turkey choke.

Since the beginning I have used number six buffered and copper plated shot. Other hunters like four or five shot.

While I shot a few birds early on with 2 3/4 inch shells, I soon switched to 3 inch. You might think 3-and-a-half inch would be the way to go, but it isn’t. Pattern a few and compare to your 3-inch.

The past few years, ammunition makers have begun offering loads produced specifically for turkey hunting. The goal is to push killing patterns out to 50 yards or more. 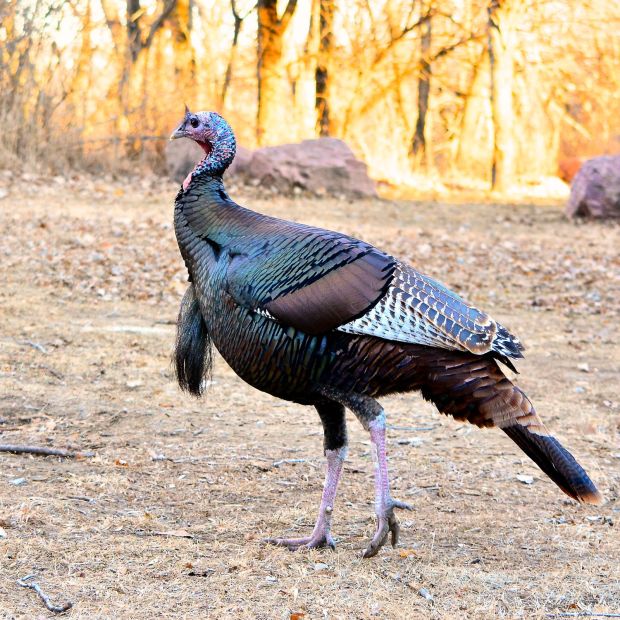 If you are hoping to bag a big tom like this one, now is the time to begin planning for your hunt. Scouting, patterning your gun and calling practice are among the preseason activities to insure a successful hunt.

The downside is the price. Some of these will range around $30 for five shells.

Do you need to move up to these loads? Well, I’ve shot in the vicinity of 70 turkeys with my copper plated, buffered loads that come 25 in a box.

One thing to consider if moving up to these tight-patterning loads is that close in your pattern could be so tight you might miss. It wouldn’t hurt to see what your loads do at 10 yards.

You should also practice estimating distance. Not everyone has a range finder. I usually set my turkey decoy out 20 steps from where I am sitting and that helps a lot. Turkeys are big birds and it can be easy to take a shot that is too far out.

Go through all of your turkey hunting equipment and make sure it is clean and ready to go. Also practice your calling. The more you practice, the better you will get. That being said, you don’t have to be a master caller to be successful.

If you enter the woods opening day prepared, your chances of falling into that 80 percent range will be greatly diminished.

More outdoors, information can be found at http://siouxcityjournal.com/sports/recreation/outdoors/

← Prev: TURKEY TALK: THREE TIPS FOR TAKING A TOM Next: IT'S SPRING TIME, TO GET YOUR MINERAL LICKS STARTED! →