Protect yourself from Tick Borne diseases by Gary Howey

"Of the Outdoors" Columns | Gary Howey-NE.

Most seasons, deer, turkey pheasant can be found listed on the Game, Fish and Parks calendars and web sites, one you won’t find there is the tick season, but don’t let that stop you from being prepared for this season in the same way you’d be prepared for the others.

Ticks are small disease carrying insects found in grassy and wooded areas and if allowed to get on the skins look for a warm moist area to embed themselves. They come out in the spring, about the time outdoorsmen and women head into the woods looking for morel mushrooms, wild asparagus or hunting turkeys. Spring isn’t the only time you’ll see ticks as these pests hang around all summer on into the fall.

There are two groups of ticks, the hard and hard or soft ticks. In our area, it’s the hard ticks found in wooded, grassy, and densely vegetated areas.

Soft ticks tend to live in bird nests, on rodents, and on bats but either can find their way onto us, luckily, no species of ticks solely depend on us for survival. Some ticks are only found on a certain host; luckily, we aren’t one of them.

A female tick can lay a bunch of eggs, anywhere from 3,000 to 11,000 eggs, so we need to be aware of them and prevent them from catching a ride from us.

There’s only one way to avoid the possibility of avoiding a tick borne disease and that’s to avoid areas they inhabit, DUH, like that’s going to happen, if you’re an outdoorsmen or women spending every spare moment out in the field or woods.

Since we know we are going to be in the same areas that ticks inhabit, below are a few simple precautions that can reduce the chances of a tick encounter.

Tip #1: Ticks crawl upward onto a host, that’s why it’s a good idea to cut off any route they might have in an attempt to get on your skin and why it’s an excellent idea to tuck your pants legs into your boots and your shirts into your pants. For extra protection, tape them shut with duct tape, then twist the tape so the sticky side is out and make one more wrap.

Tip #2: You’ll want to wear light-colored clothing whenever possible. That way, ticks are easier to see before they find their way to your skin. 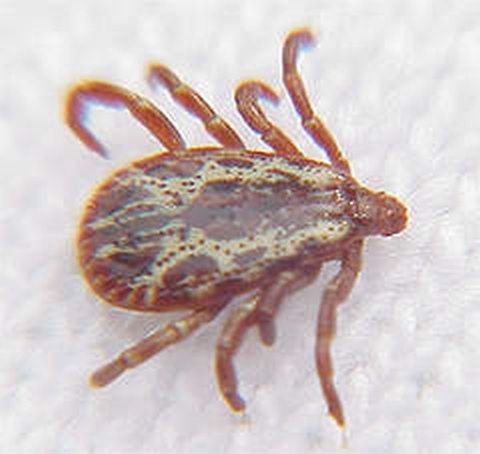 Tip #3: Look for a repellent that contains 0.5 percent or more of Permethrin. This works as a great tick repellent and is used on clothing. In fact, some products containing Permethrin can remain bonded with clothing fibers even through laundering.

Tip #4: When you return from the outdoors, inspect all your clothing before going inside. Once inside, do a thorough whole-body inspection and wash your clothing as soon as possible.

Tip #5: Don’t forget to protect man’s best friend. Commercially available dog dips containing Amitrax or Permethrin can provide canines with tick protection for two to three weeks per treatment. For the very best tick prevention for canines, contact your local veterinarian and inquire about prescribed treatment options, most of which can now last for a month or more.

If you find a tick attached to your body, it is recommended that the tick be removed as soon as possible and the affected area is disinfected immediately following the removal.

Research trials have shown that the best method to remove a tick is to grasp the tick close to the skin with fine-tipped tweezers, placing the tweezers close to and parallel to the skin so that you grasp the base of the tick’s mouthparts rather than its body. Pull gently but firmly, straight away from the skin until the tick comes free. Keep in mind that it’s best to grasp the tick from its back to its belly, instead of from side to side – this helps to prevent the tick’s mouthparts from remaining imbedded in the skin. The sooner you remove a tick, the less chance it will transmit a disease to its host.

One of the most common diseases transmitted by ticks is Lyme disease. In 2011, the Centers for Disease Control and Prevention (CDC) had 11 confirmed cases and six probable cases of Lyme disease within Kansas. To put things in perspective, Pennsylvania had 4,739 confirmed cases the same year.

After a tick bite, Lyme disease may progress several weeks without signs of illness, making diagnosis difficult. Years of pain and physical and mental impairment can result if untreated. The other three diseases often show signs within two to five days of a tick bite. They may progress so rapidly that a day or two of delay in diagnosis and treatment may result in death.

If signs of severe or persistent headaches, fever, soreness or stiffness in muscles and joints, appetite loss, fatigue, or a skin rash occur within three weeks after a tick bite, immediately contact your doctor. Early diagnosis and treatment is critical.

The key to preventing tick borne disease is to cover up and use a repellent containing Permethrin.

← Prev: Danger lurks below the surface of most lakes by Larry Myhre Next: TIPS TO GET YOUR NEWLY PLANTED SEEDLINGS THROUGH THE HOT SUMMER →