Danger lurks below the surface of most lakes by Larry Myhre

I still remember the first northern I ever caught. I was dangling a worm on a big bullhead hook off of a dock at Wall Lake, a small, 200-acre natural lake just southwest of Sioux Falls, S.D. I was all of 5 years old

The little green rocket zoomed out from under the shaded depths and nailed that worm. The speed of his ambush soon brought him up short at the end of about three feet of braided, black Dacron that hung down from my steel baitcasting rod.

His momentum carried him out of the water, and I swung him back onto the dock and made a run for shore. There I took note of the thing. The evil look in his eyes did not escape me, and neither did the vicious looking teeth clenched around my bullhead hook.

I would later rendezvous with those wicked teeth in a mind boggling number of waters throughout the upper Midwest and Canada. You see, northern pike are found just about anywhere there is water.

But for now, I wasn’t even sure what it was. It was just another cog in the mystery wheel of what lies hidden beneath the waters’ depths.

I think that was what attracted me to fishing in the first place.

There were a lot of creatures living out of sight in all kinds of waters. I was intrigued and marveled at each one. Some were immensely beautiful like the first pumpkinseed sunfish I caught out of Beaver Creek a mile from home. Some ugly like the bullheads, catfish and carp I caught below the low head dam on the Big Sioux River at Klondike, Iowa, just a few miles from our South Dakota farm.

And some, just a surprise like the northern with the evil eye.

I was a lucky kid.

My folks and my grandfather took me fishing all the time. I graduated from a cane pole to an old steel rod and Bronson casting reel before I attended the one-room country school a mile and a half from the farm. I still have the casting rod. In fact, I looked it over yesterday. For some reason I had painted the steel shaft red up to the first guide and then white up to the next guide. I have no idea why. Maybe it was because grandpa always painted everything, even his tools.

Thankfully, I got past that.

But I never had any idea of the monstrous proportions these fish can attain until we vacationed at Minnesota’s Green Lake one summer.

Dad was casting a red and white Dardevle spoon when a monster fish hit it. When the fish turned to run for deeper water, it came up short against Dad’s 20-pound test Dacron line. Before the line broke we saw this huge tail come out of a washtub-sized boil and the fish was gone.

In college, at the University of South Dakota in Vermillion, I spent more time in the spring along the Missouri River than I did in class. The backwaters were filled with northerns and I caught a bunch of them both at Vermillion and at another backwater on the east edge of Yankton. Most of these fish were in the 5 to 8-pound range. Biggest I ever caught probably pushed 12 pounds.

Lure of choice? The red and white Dardevle spoon. I’d venture that more northerns have been caught on red and white spoons than any other lure. 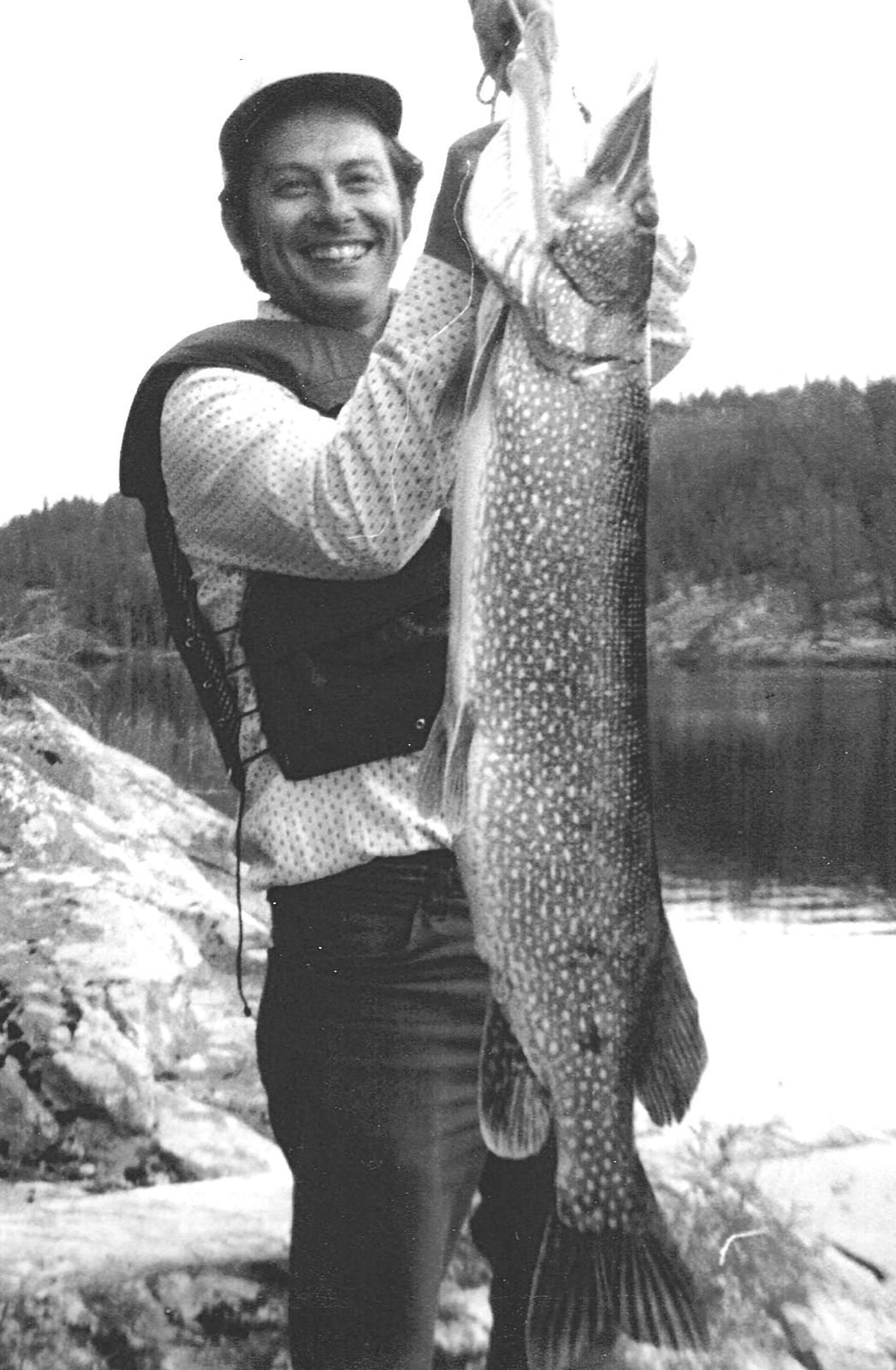 Northerns grow to gigantic sizes in remote fly-in lakes in northern Manitoba. This one was caught in the Bloodvien River sometime in the mid 1970’s.

But it wasn’t until I began traveling to Canada that I learned just how big and vicious these toothy critters can become. The Bloodvein River was where I was first baptized in fire. This big, slow moving river spills over an impassible waterfall before meandering some 20 miles to dump into Lake Winnipeg. It spreads out into meadows choked with aquatic weeds where moose feed in the early morning light and the toothy water wolves rule beneath the surface.

Walleyes swim the open water currents and huge catfish gather below the falls to feast on disoriented fish washed over the steep precambrian rocks.

Here swam the biggest northern I ever landed. I speared it onto a quarter-inch nylon rope and tied it to the dock. The next day the float plane loaded it up and took it to a taxidermist. I learned later that it weighed 28 pounds and was displayed on the wall of a bank somewhere in Manitoba.

It was on massive Cross Lake where I learned northern pike will not let a lure fall below them. I had designed a type of spinnerbait which would helicopter slowly down through the water column, Indiana spinner rotating on the wire arm and a 4-inch twister undulating off the hook.

I found a sharp drop off from nine feet of water over a ledge which bottomed out at 40 feet. Previous northern fishing experience told me summer northern often suspend off sheer drops such as this.

I’d cast out the spinner and let it helicopter into the depths where occasionally a northern weighing from 15 to 20 pounds would inhale it. I never did fish for walleyes there.

Warm spring days bring back memories of lying on a mud bank somewhere on the east shoreline of Lake Oahe, the big Missouri River reservoir just north of Pierre, S.D. Big northerns venture into those bays to spawn even before the ice goes out. And they stay there for two or three weeks after the ice is gone.

I fished with a big rod and heavy line at the end of which was a 12-inch steel leader. I’d run the shank of a treble hook through a frozen smelt and attach the hook to the leader. The rig would be tossed out, the rod placed in a rod holder with the free spool button pushed in. I’d attach a big bobber to the line at the water’s edge.

Then it’s just a matter of lying down and trying to stay awake in the warm sun.

When a northern hits, the bobber skates across the surface like a water skier and it is time to pick up the rod and set the hook.

The biggest northerns of the year are caught this way. It’s fun. And exciting. And it is still being done each spring.

It should go without saying that you should stay away from those razor sharp teeth which fill the jaws and the roof of the mouth of a northern. If you catch one on a jig while fishing for walleye and manage to get him in without those sharp teeth cutting the line, it’s tempting to stick your index finger down that gapping mouth to dislodge the lead head invariably imbedded deep in the roof of the mouth.

With your finger down there, the northern will simply close his mouth. As those teeth penetrate your finger, the pain is enormous but even more so would be the attempt to pull it out of there. No, you are imprisoned until the northern decides to open his mouth again.

Then it’s time to quell the blood flow. That, I’m here to tell you is easier said than done. Their mouths must be filled with anticoagulants. You simply will not stop bleeding for some time. I’ve probably lost a pint of blood to northern bites, so take my word for it.

My late friend Jim McDonnell had fished a lake in northern Ontario which was filled with huge northerns. He wanted to catch them with a fly rod and our goal was to land one besting 30 pounds. We had two weeks booked at the lake based on the average ice out. We ended up with only two days due to an extremely late ice out.

But we took so many northerns our arms ached, and we ended up trolling with the big flies each day. There was no 30 pounder, but we did take many fish over 20 with the best reaching 25 pounds.

I’ve been fortunate to experience some tremendous pike fishing for huge fish, but frankly none of them made my heart pound so fast as that little “hammer handle” I caught on the bullhead hook at Wall Lake. To my young eyes it looked like some kind of monster. And I knew then that life was filled with danger for things that swim below the calm surface of any lake.