Red River Channel cats on the bite By Larry Myhre

GRAND FORKS, N.D. | It was the Mother of All Cold Fronts that swept through Grand Forks, N.D., and other parts north a couple of weeks ago.

“The river is up about 13 feet from where it was a week ago,” Brad Durick told me over his cell phone. He was on the Red River with noted outdoor photographer Bill Lindner and staff, doing product still and video filming.

Gary Howey and I were pounding down the interstate on our way to Grand Forks after flying out of Ontario’s Carroll Lake. We were to fish with Brad the next day.

We had battled the effects of that cold front for the past week, all the way from Lake of the Woods to the Ontario fly-in. For the next few days the sun would be shining and we hoped the catfish, for which the Red River is noted, would be in a biting mood the next day.

As it turned out, they were.

The tip of Brad’s Rippin Lips catfish rod took a heavy dive and stayed down while the Rippin Lips 8/0 circle hook did its work. I picked up the rod and began battle with the channel cat.

It was a 10-pounder and like all his brothers, he fought to the end before we finally got him in the net.

“That cold front dropped the water temperature several degrees,” Brad said, “and that slowed the fishing. It was really great before.”

But the fishing was bouncing back and the next rod dipped with the bite of a 4-pounder.

Durick is widely known throughout the cat-fishing world. He is now a full-time cat-fishing guide on the Red and also can arrange trips on North Dakota’s Devils Lake. He is also a nationally recognized fishing educator and outdoor writer. He is the author of the 2013 self-published book, “Cracking the Channel Catfish Code.”

Prior to the cold front, the Red was running very low. The area had received little snow so there was no runoff, kind of unusual for this area.

In fact, in 2011 the river was at near flood stage the entire year. Now, with the river running 13 feet higher than earlier this year, Brad says the level is just right for good cat fishing.

“We just need it to warm up a bit,” Durick, a U.S. Coast Guard licensed captain, said.

We had launched Brad’s 19-foot G3 aluminum boat at the Grand Forks boat ramp and headed downstream, which is north on this side of the divide. We hadn’t run very far before Brad pulled above a river hole just off the main current and dropped his Cat River anchor (made in rural Hinton, Iowa, by the way) over the side.

With all three of us licensed to fish, we could put out two rods each. Each rod was rigged with 30-pound test mono on Abu Garcia Ambassadeur reels. A no roll, 2-ounce sinker rode above a swivel and a 2-foot leader of mono ran to the hook. The rigs were baited with cut sucker pieces.

Brad says sucker meat is usually the way to go early, but later in the year the catfish seem to prefer goldeye. We had some of each on board and caught fish on both.

We worked our way north along the river, stopping at holes that had produced before and moving after about a half hour or so of fishing. 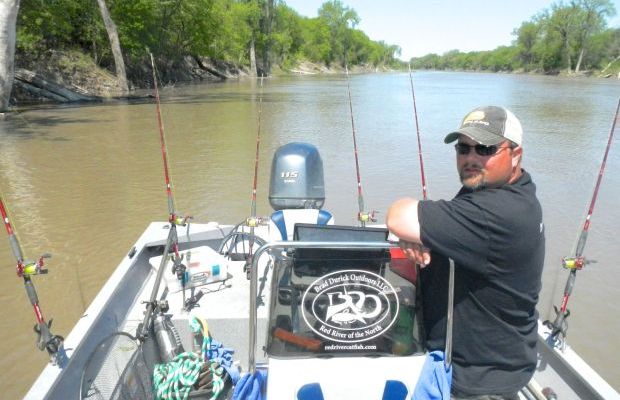 Brad Durick, Grand Forks, N.D., guide and fishing educator, is shown in his office, the back of his G3 boat anchored above a catfish hole on the Red River

Brad says a typical day-long trip will usually produce about a dozen catfish. Some days may yield as many as 20 to 25 cats, but he says that is a heck of a day. Most fish in this area of the Red will average about 10 pounds, but most days he will put cats in the high teens in the boat or even one over 20.

Durick has been guiding on the Red for eight years. He offers eight-hour trips as well as a six-hour package and even a four-hour twilight trip.

He supplies rods, reels, tackle and bait. Customers should bring food, beverages, rain gear and cameras. He releases all catfish over 24 inches. He does not provide fish cleaning services. Check out his web site at: www.redrivercatfish.com.

It was about mid afternoon when Howey put the biggest cat in the boat so far. It was a 15-pounder, fat and healthy and a great fighter. We were filming for Gary’s Outdoorsmen Adventures television show and after slipping this fish back into the water,we knew we had enough footage for the segment. The 15-pounder was what we call the anchor fish.

At another spot, one of the rods dipped and the fish took the line into a large snag. We let out a lot of anchor rope and finally worked it free. It was a walleye of about 4 pounds.

When the rod dipped at the next site, I picked it up and felt the heavy pull of a really good fish. Brad netted it and it pulled the scale down to 16 pounds.