As Ben Loecker and I watched, we could see three Toms fanned out and proudly displaying for their harems. The birds were displaying about a half mile south of us in a harvested bean field, it wasn’t the half-mile walk that I was thinking about; it was how to get Ben close enough for a shot without being spotted. The terrain we had to cross included a lot of open ground, offering us, very little to hide our movement. Our only hope was that the low fence line along the east side of the field, that had a few trees and weeds along it, would give us some cover as we made the stalk.
I had met Ben, Hartington, NE. a seventh grader at Cedar Catholic when I was one of the guides on a youth turkey hunt sponsored by the Nebraska Game & Parks at Ponca State Park. On that hunt, we were unable to tag a bird, and when the 2015 season opened, it was my chance to redeem myself.
The birds we were watching began to move to the southeast, into land that was close to a rural home, so we needed to do something and do it fast before our opportunity to work these birds walked away.
In past columns, I had mentioned using tail feathers, the “fan” from a Tom turkey used to attract a bird and since I had one in the truck, I grabbed it, a hen decoy and my turkey-hunting vest as Ben fed Winchester turkey loads into his twelve gauge.
We would need to make our way through the terraces before entering the fence line leading to the field the birds were using. As we made our way towards the birds, we paused occasionally, glassing the field, allowing us to check on the birds and know which direction they were heading.
When turkey hunting, it’s the hens you have to worry about as there’s always one of them with their head up looking things over. The Toms are too busy strutting, trying to impress the ladies to worry about anything else, but once a hen gives a warning putt, all bets are off and the entire flock hoofs it towards cover.
We were fortunate maneuver through the terraces without being seen and now we were faced with a dilemma, we would have to make our way across open ground, where the birds could see us.
Both Ben and I were dressed in camo, with camo facemasks and gloves, allowing us to blend in with the surrounding terrain. What worried me most was that our movement would be detected by the always-vigilant hens and the entire flock would disappear.
We decided to get as low as possible, hunkering down, and slowly move through the open areas from one clump of brush to the next locations where we hoped there would be enough cover for us to call from.
I held the fan in front of my face, making us look like a “tall” Tom slowly working towards the flock. I hoped the uneven ground between the birds and us would conceal our lower bodies so we didn’t look like a six-foot Tom and that turkeys couldn’t judge the height from a distance. 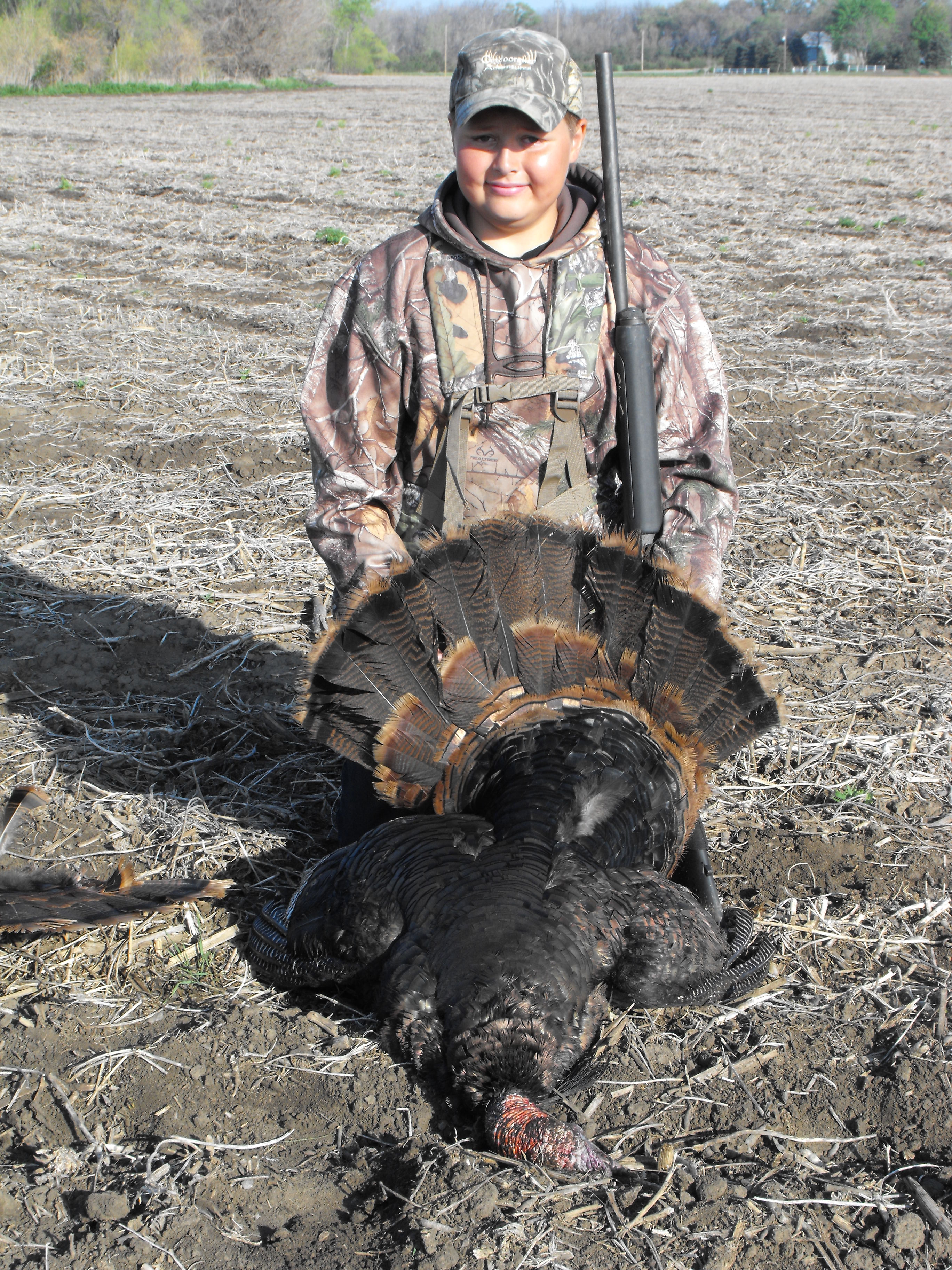 Peering through the feathers, I guided Ben down the fence line in the general direction of the Toms. Once we made our way to an area with cover, we’d set up, with Ben out in front while I sat behind him, using my box and diaphragm call to try and draw the birds closer, as I did my best with the tail feathers to imitate a strutting Tom.
The Toms looked our way, gobbled, refusing to leave their hens in order to fight off an intruding Tom, which meant, once again, we would have do the sneak, across open ground. The “fan”tastic stalk had worked so far, so we attempted it again, this time it would be through an area more open then before and much closer to the birds.
Once again, we hunker down as I held the fan in my face, as we meandered towards the flock, slowly, but surely, closing ground on the birds.
If we could make it another 120 yards, without spooking the birds we would be home free, as the weedy fence line would shelter us, giving us a place to set out our hen decoy and call.
We were approximately twenty yards from the corner post, when a Tom, who had noticed the tall intruding Tom getting close, came over to investigate.
In full display, he made about four steps into the open and as he turned in our direction, he realized he had made the biggest mistake of his soon to be short life, came out of strut and started to beat feet in the direction of the creek.
Ben’s twelve gauge came up, decking the big bird before he had time to reach cover. He laid there, his brilliant gold and brown colors glistening in the sunlight while Ben and I celebrated the end to a successful hunt.
In just two short hours we had spotted the birds, made a half-mile stalk and were putting Ben’s tag on a twenty-two pound Tom with a ten inch beard and spurs over an inch long, not a bad morning hunt. We learned several things on this hunt, one was, using a fan to get close to turkeys works and turkeys do not seem to have the ability to judge how tall things are!
The next time you are out turkey hunting give this “fan”tastic turkey hunting method a shot, it just might help you fill your tag.