Slim Jim may be best bucktail jig ever by Larry Myhre

The road from Winnipeg to Grand Rapids, Manitoba, is a long one.

Highway 6 shoots north along the west side of that inland sea known as Lake Winnipeg. It is a land of sloughs, lakes and rivers winding through a plateau of trees and open lands.

It was sometime in the early 1970s that I last travelled this road, a passenger in a car piloted by Lacey Gee. We were on our way to fish Cross Bay which is located on huge Cedar Lake, just a few miles west of Grand Rapids.

For a long stretch along this road there is no sign of civilization. Weary of travel, Lacey pulled the car over after crossing a small stream.

“I’ll bet that river is full of walleyes,” Lacey said. “Let’s give it a try.”

I tied on an eighth-ounce lead head jig that Lacey had invented just for walleye fishing.

It was a simple little number called the Slim Jim. 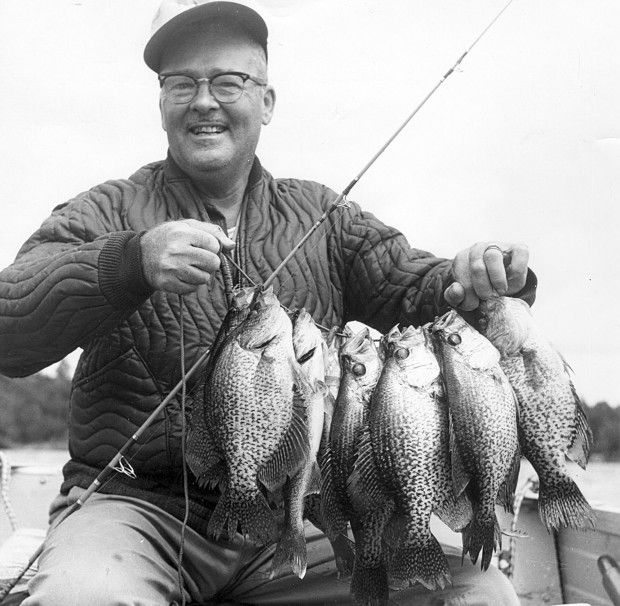 Lacey Gee was one of the Midwest’s most innovative anglers during the 1960s and ’70s. The jigs he designed are among the best ever tied and the Slim Jim bucktail is no exception. (Contributed photo)

It was marketed by Gee, owner at the time of the Wapsi Fly Company located in Independence, Iowa. I’ve written about Lacey before in this column. He opened his fly business in 1945 and by the time he sold it to Tom Schmucker in 1973, it had grown into the third largest fly tying supplier in the country behind Herters and Universal Vise. Today it is the largest fly tying supplier in the world.

My little five-foot fiberglass rod sent the jig on a mission. Before it hit bottom, I noted the twitch in the four-pound-test line which signaled a fish had engulfed it.

I set the hook and soon lifted a little sauger from the water. I noticed Lacey was doing the same. That stream was literally carpeted with sauger, all about the same size, and we caught them until we tired of it.

“They love that Slim Jim, don’t they,” I said to Lacey who simply smiled and nodded.

Lacey had a flotilla of ladies tying his Slim Jim and a number of other jigs and flies he had designed back in Independence. The Slim Jim was never marketed nationally and only a few jig fishermen in the know gave it a prominent place in their tackle kits.

When we arrived in camp that evening, I set up my fly tying vise on the cabin’s table. I told Lacey we needed to invent a new color of Slim Jim especially for the waters of Cross Bay. He pulled a yellow bucktail and an orange bucktail from my supply and told me to make it those colors. 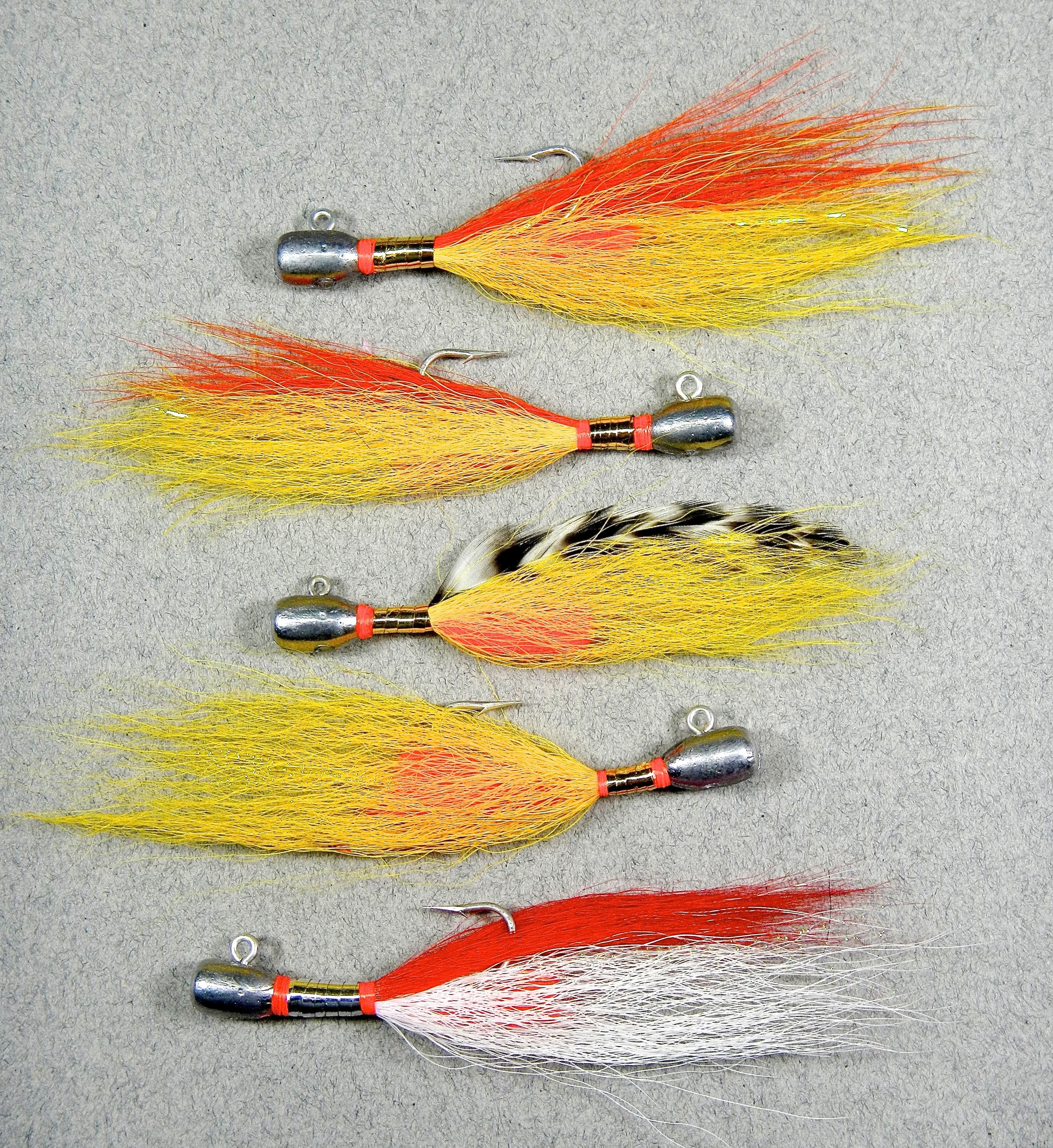 Here’s a selection of Slim Jim bucktail jigs from my tying desk. The heads are poured on an aluminum jig mold I made back in the early 1970s.

While Lacey sipped his glass of Southern Comfort on the rocks, I tied six of them, yellow bucktail under orange bucktail. The next day those “Cross Bay Specials” proved their worth on those walleyes.

Today, most serious walleye fishermen know that bucktail jigs are very effective fish catchers in the fall. It’s probably because walleyes are used to feeding on larger baitfish when late October and November rolls around.

At any rate, it’s no secret that late fall walleyes like hair jigs.

What is a secret is that perhaps the most effective hair jig ever invented for walleye fishing is no longer being manufactured.

When Lacey sold his business and retired in 1973, only the guys tying their own carried on the tradition of the Slim Jim.

For those of you who tie your own, here is the recipe.

I use jigs poured on O’Shaunessey hooks for this pattern, but any of the commercially poured jig heads should work just fine. We used to use red thread to tie, but today I use a fluorescent fire orange waxed nylon such as Danville’s 210 denier.

The tail of this jig is a strip of fire orange Glo Bug yarn or something similar. I pull the yarn apart into two pieces to lessen its diameter and tie it in just behind the head. Then I wind back keeping the yarn tight and arched over the hook shank as I wind about a half length of the hook and then wind back to the head. I trim the yarn about a half inch beyond the bend.

Next put a few strands of pearl flashabou over the yarn and tie that in the same way. This is a concession to modern day materials. I cut a hank of bucktail and remove the overly long fibers and the short fibers and then hold it over the hook to determine the length to cut it. The hair should extend quite a ways behind the hook.

I hold the hair on top of the hook right up against the lead head and make two wraps. Then, with tension on the thread I work the hair around the hook shank with my fingernail.

Once I have determined the hair is in place, I wrap back almost to the yarn and then back again to the head. If I’m tying the jig as a single color, we are about done, but if I’m adding another color, I turn the jig over in the vise and apply a smaller bunch of bucktail on top of the shank in the same manner.

One of the secrets of jig tying is to make your tight wraps away from the head and as you advance the thread forward make lighter wraps applying just enough pressure to hold the ends of the bucktail down.

When I have finished that wrap, I tie in a piece of large tinsel and wrap back to the end of the thread wraps, covering them up with tinsel and then back again to the head and tie off. The jig is finished.

One of the keys to the fish catching success of jigs is sparseness. Too much material ruins the effectiveness of a jig. It’s difficult to tie too much bucktail to the Slim Jig. Most of the bucktail jigs I see offered for sale are way overdressed. They will be better fish catchers if you trim out some of the fibers.

And don’t think fall is the only time to use the Slim Jim. It’ll catch fish every month of the year.

I’ve put a good number of walleyes in the boat over the years since that Cross Bay trip using the Slim Jim. And by the way, the Cross Bay Special (yellow and orange) has been effective everywhere I have used it.

← Prev: Going Back to Prehistoric Times, In Search of the Paddlefish By Gary Howey Next: The Poinsett Experience, A Proud Community, excellent Fishing, honoring Veterans and making Friends By Gary Howey →