Bass, both the smallmouth and largemouth bass are one of the top predators in any body of water as they’re some of the most aggressive fish in the body of water.

The largemouth inhabits most bodies of water from small farm ponds, gravel/sand pits, to the Missouri River Reservoirs of South Dakota and Nebraska. Where’s there’s water, you’ll find the largemouth, including in the numerous lakes found throughout Minnesota and the “Glacial Lakes” of northeastern South Dakota.

As mentioned earlier, largemouth can be very aggressive and will attack almost anything they might think they can get into their mouth. Among several of the things that bass are known to eat include snakes, frogs, lizards, salamanders, ducklings, crayfish as well as other fish.

Bass are aggressive feeders, in the spring before the “Dog” days of summer; you’ll find them shallow in preparation for the spawn.

The male will create a nest with their tail in one to three feet generally less than ten feet from shoreline where the fertilized eggs are deposited. The male will guard the fingerlings until they’re capable of fending for themselves.

Because the male has been busy keeping predators away from the nest, he hasn’t had an opportunity to eat and one of the final things he’ll do before leaving the nest is chase the fingerlings from the nest by gobbling down as many of the young as possible. This not only allows the male to feed, but it may also show the young fish that they can’t trust anything, not even their father.

After the spawn, the female moves into the deep water to rest and recuperate from the spawning ritual.  During the cool time of the day and after the sunsets, the females will move from the deeper water up shallow looking for a quick meal.

In the summer, all largemouth will look for more comfortable water temperatures, this may be deep, adjacent or in the weeds or in the shade of a dead fall or stump lying in the water.

As summer moves into fall, bass like all fish will start to feed heavily, as they need to bulk up before winter sets in, feeding heavily until water temperature decline when these cold blooded creatures metabolism slows and they ride out the winter.

Some of the preferred baits for taking largemouth include; jigs and pig, spinnerbaits, buzz baits, Texas rigs with Berkley Gulp, PowerBaits and Carolina Rigs,  dropshot rigs, crankbaits like those manufactured by  Bagley and in some cases live bait rigs.

The largemouth records for the states mentioned above vary with the South Dakota record for largemouth being 9 lbs. 3 Oz. with the Minnesota record fish coming in at 8 Lbs. 15 Oz. while the Nebraska record tipping the scales at 10 Lbs. 11 Oz

The smallmouth bass can be even more aggressive than their cousin the largemouth bass are. Called the Bronze-back, a name given to smallmouth because of their aggressive nature and the way they fight once hooked, pretty much describes the fight an angler has on his hands once the fish is hooked. They run hard, test your equipment and come from deep water in a flash, dancing along the surface trying to dislodge the hook in their jaw.

They inhabit numerous lakes throughout Nebraska, with excellent populations in the Missouri River reservoirs as well as on Merritt Reservoir and other smaller lakes.

The South Dakota Reservoirs, Lewis & Clark, Lake Francis Case, Lake Sharpe and Lake Oahe all have huge smallmouth populations as do the “Glacial Lakes” in the northeastern portion of the state that include Horseshoe, Roy Lake, Reetz Lake and Enemy Swim.

In Minnesota, you’ll find numerous lakes where these “Bull Dogs of the Deep” will test your equipment and your fish fighting skill. 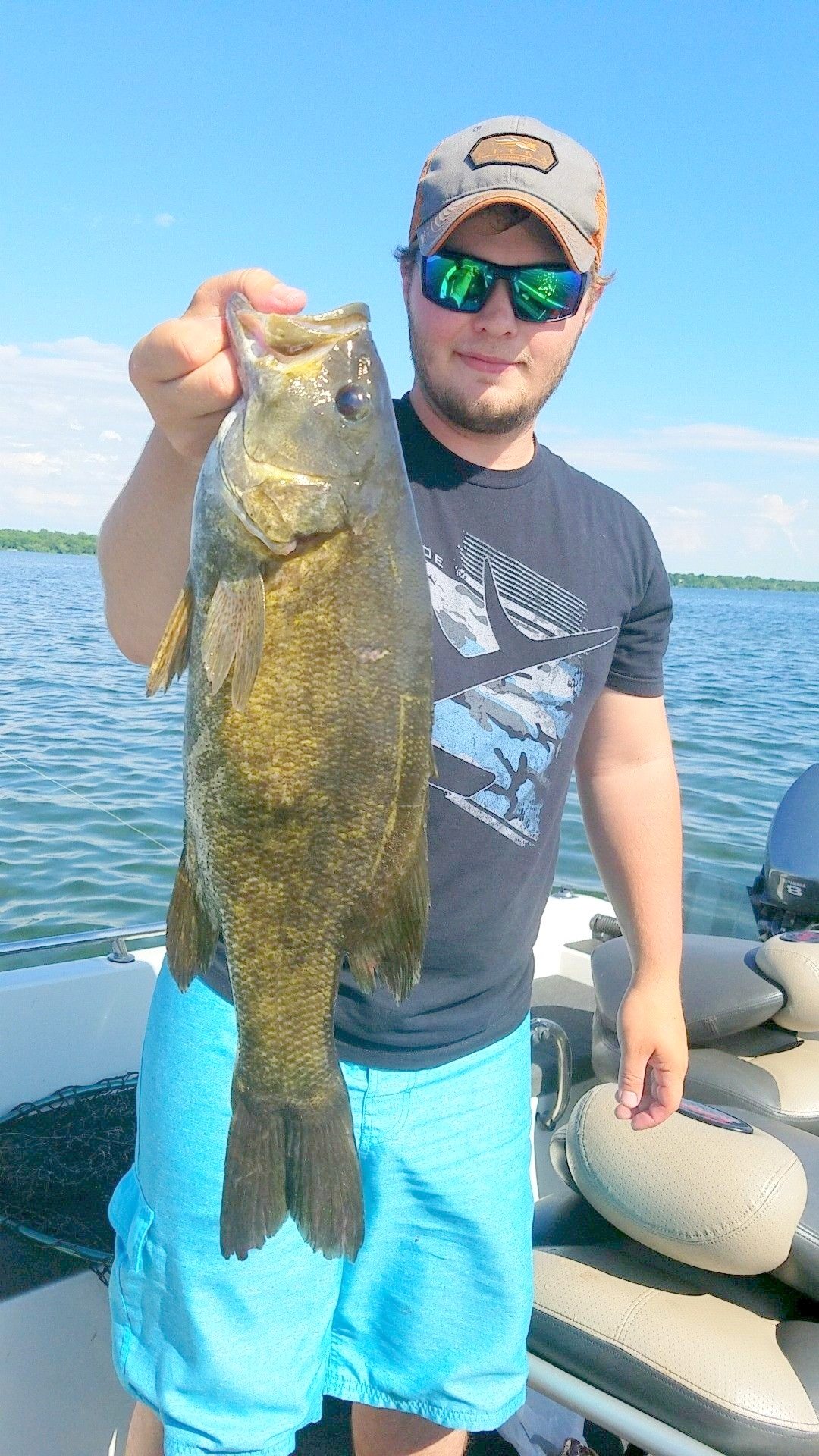 Garrett Heikes, Wayne. NE. with an excellent smallmouth bass he took while filming and fishing with Outdoorsmen Adventures television near Alexandria, MN.

Mill Lacs, Otter Tail, West Battle, Green Lake and the numerous  lakes around Alexandria. MN. all have tremendous smallmouth populations, as do other bodies of water in the “Land of Ten Thousand Lakes.”

Smallmouth bass are also nests builders in the spring, building a nest in water that may run from three up to twenty-five feet deep depending on the water clarity. These nests are a hollowed out depressions about two to four inches deep, the smallmouth seem to prefer areas with a gravel bottom near some type of cover.

Smallmouth, just like the largemouth will attack anything that might fit into their mouth.  Many of the baits used for smallmouth are smaller than the largemouth’s. But, don’t think that because their mouths are smaller that they won’t attack a big bait, especially in the Spring and Fall as anglers are using huge swimbaits to take fish on both the larger lakes and smaller bodies of water.

Other baits that those chasing smallmouth bass like to throw include crankbaits, spinnerbaits, smaller jig & pig, plastics, Gulp and Powerbaits Texas rigged and dropshot rigs.

The smallmouth bass state record in South Dakota was recently broken and now sets at 7 Lbs. 4 Oz. while the Nebraska record comes in right behind it at 7 Lbs. 3 Oz. The brute of the three states is an 8 Lb. bruiser taken in Minnesota.

In the upper Midwest, we’re blessed with excellent fishing with some chasing walleyes, others panfish and many others after the bass. Giving us, so many fishing opportunities that others wish they had.

Both species of the bass family are hard fighters, doing all they can to kept  from being landed and always having that last charge towards the bottom as they approach the boat. They’ll dive deep, using all they know to throw the bait and then tail dancing on the surface, which makes these, fish some of the best fishing memories for anglers in the upper Midwest.

← Prev: Dove Hunting Can be Humbling By Calvin James Next: Getting The Most Out Of Your Clover Food Plots →