Dove Hunting Can be Humbling By Calvin James

The summer has flown by so fast that it seems like summer is quickly slipping away with the early fall hunting season right around the corner.

This is when I start to think about the upcoming hunting seasons with the dove season one of the first to open.

Most of the states in the upper Midwest now allow dove hunting with the opener around September 1.  In the upper Midwest, we have two species of doves that we can hunt the Morning Dove and their larger cousin, the Eurasian Collared Dove.

When it comes to hunting doves, the weather is a huge factor, as it doesn’t take much of a weather change to get the birds to pack up and migrate south.

If a cold front or damp weather arrives neat the opener, and stays around for several days, many of the doves will begin to move out.

The good news is that unless the “fowl” weather stays for a long period, the doves from up north will move down, stopping over, giving us another chance to hunt those birds moving through our area.

If the numbers of birds that I’ve seen in the upper Midwest are any indicator of what the hunting seasons are going to be like, it should be an excellent one.  With the dry weather we’ve had, the birds are concentrated around water holes, ponds and stock tanks. I’ve seen large numbers of doves in these areas, especially those having the dove’s favorite foods growing nearby.

Doves concentrate in areas of harvested wheat and those with ragweed or hemp, as doves will fly long distances to feast on the seeds of these plants.

It might be that the hemp or marijuana is one of the reasons that the dove’s flight path is so erratic.  As about the time you take a shot at them, the birds will fold their wings losing altitude and wing off in a different direction.

It always seems that doves will change their altitude and direction at will.  Unfortunately, for many hunters, just about the time they shoot, the bird drops a few feet, causing the shooter to shoot where they were before they made such a quick dive.

The dove season generally opens up on September 1 and it looks as if there will be plenty of these dodging and weaving game birds to shoot at.

I said shoot at and not shoot or bag, as doves can be some of the toughest of all game birds to bring down.  This is especially true after you’ve fired your first shot and missed!

Once a dove has heard the first shell go off, they go into an aerial flying act that would make any of the pilots from the Blue Angels envious. 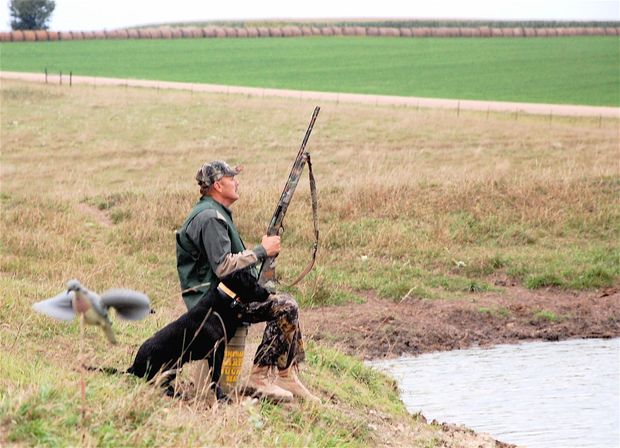 If you’re lacking cover around a dam or pond you’re hunting, set up with the sun at your back as this will allow you to move, to bring your shotgun up before thee birds spot you, as they’ll be flying into the sun. (Outdoorsmen Adventures Photo)

The choice of a gun is up to the shooter.  Some prefer the lighter 20 or 28 gauges while others like the 12 gauge since 12 gauge shells are generally less expensive.

As far as what load of ammunition to use, it doesn’t take a heavy load for doves, it just takes a good number of them.

Believe me when I say, you’ll need a lot of ammunition as the average shot per bird is somewhere around six or seven. I use Winchester AA Trap load in a 7 1/2, 8 or 9 shot. They are inexpensive and if you are into reloading, the casings are reloadable numerous times.

The best dove hunting is during the late afternoon or early evening when the birds stop by the ponds for a drink as they head to their roost.

I’ve found the best location to set up is around one of these watering holes. In a dry year like the one we’re having, the number of ponds may be limited with the doves having to use what’s available, which should bunch them up early.

If you’re hunting around water, a good retrieving dog really comes in handy, as many of your birds will end up in the water. If you don’t have a dog, you can wait for the birds to wash up along the shoreline.

If you can find a pasture area with several ponds in it, the hunting could be much better if you have enough hunters.

You’ll want to have shooters around each of the ponds, as once the birds are hunted on one body of water, they’re jump back and forth between one to another, giving several hunters opportunities to take the doves.

As I mentioned before, if they’re weeds around or adjacent to the dam, doves will spend more time feeding and drinking at them.

Another item that makes a dam attractive to the birds is dead or defoliated trees.  Doves land in these trees to look over the area or rest before and after visiting the watering hole.

If you can set up between the trees, weeds and water, chances are you will have the opportunity to shoot at quite a few doves as the wing back and forth from one spot to another.

When hunting later in the day, it’s not a bad idea to set up on the west side of the dam with the sun at your back as the birds coming in will have a tough time seeing you as they’re looking into the sun.

Camouflage isn’t necessary, but it’s best to have something to duck down behind or a tree to rest against as this gives you the element of surprise and a chance to get off at least one shot before the dove start their aerial maneuvers.

Some hunters like to clip a few decoys in an adjacent dead tree or on a dead branch, as doves are social creatures and head into the decoys when coming into the water.

Because we hunt on ponds with very few trees, we needed come up ways for the doves to see our decoys.

I’ve made a “U” shaped wire from coat hangers that I clip my decoy to, which allows me to place them in the open area on the edge of the water.

If the weed growth adjacent the open area makes it hard for the birds to see the decoys on the ground, I’ve devised a stand constructed from ½” PVC pipe, a decoy tree to raise them up, making them easier for the doves to spot.

The stand consists of six short pieces of PVC pipe put together with PVC joints and couplers. I start with a base, which is a thirteen inches long, then attach a three-way coupler to the base and then inserting my first perch, a ten inch piece of pipe I’ll add another ten inch piece of pipe above it a second 3-way coupler for a seven inch perch. I’ll add another longer piece of pipe; topping it off with a three-way coupler with a ten inch perch. The stand can be as short or tall as you like, as can the perches, you can adjust the height or length of the perches to fit your hunting situation.

Because PVC is a light color, I spray the pipe with a green or brown color so they won’t stand out as much

Generally, four to six decoys are enough to catch the bird’s attention.  I’ll put the decoys off to my right or left side depending on if you’re right or left hand shooter and the terrain you’re hunting.

Since I carry all of my gear in a bucket, which also acts as a seat, I won’t glue the stand together, making it easy to put out and disassemble.

Dove hunting is a great way to get in some early practice for both you and your dog.  As mentioned before, make sure you have enough ammunition. You’ll want to take along a lot as the average of one dove for every six shots you can go through shells quickly.

Dove hunting is a challenge and a great sport and can be a real humbling experience, but it’s a good way for you and a couple of friends to sharpen you shooting skills and have an opportunity to be out enjoying the great outdoors.