Some thoughts about the ones that got away By Larry Myhre 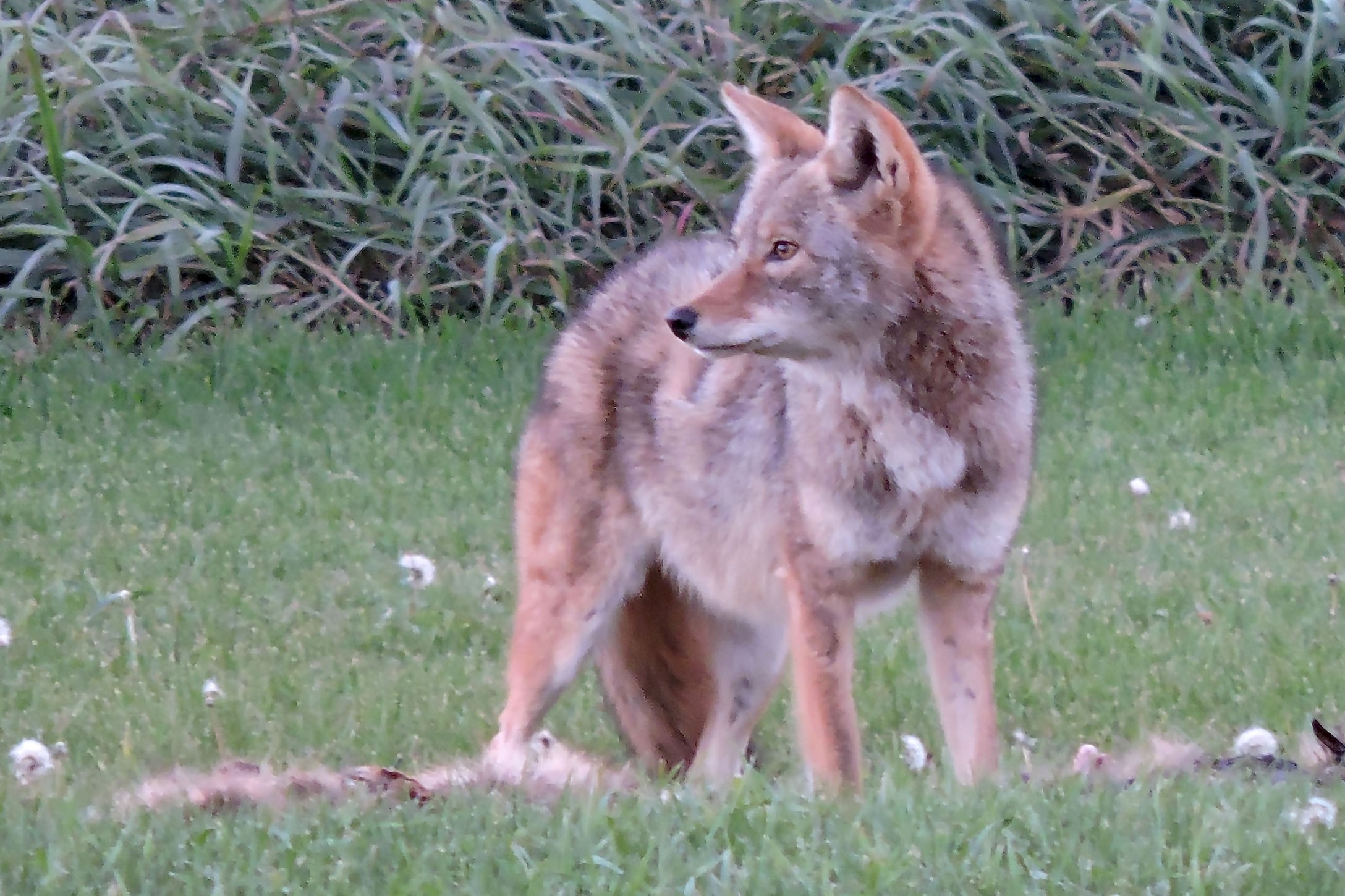 Reprinted from the SiouxCity Journal.

It came charging in. It’s paws pounding the frozen soil so hard it sounded like a horse on the gallop.

My thumb found the safety on my .243. I turned my head to see what was running in, and stared right into the face of a coyote sitting on its haunches not 12 feet away, tongue lolling out in a kind of half smile. But behind that one another was charging in and making all the noise.

“Shoot him, shoot him!” Gary yelled.

But my gun was attached to a bipod and set up to shoot downhill in front of us. I couldn’t get on either coyote, and they were both on the run away from us and into a ravine and then were gone.

“Holy mackerel,” I exclaimed. “Did you get that on film?”

Just because you can call a coyote within gun range, doesn’t mean you are going to get him. Lots of things can go wrong. This young coyote came into our farm near Canton, S.D., and was photographed by my brother Dean Myhre.

“I didn’t,” Gary answered. “I was so excited I forgot to turn the camera on.”

We were calling coyotes on the Rosebud Indian Reservation in South Dakota. Gary Howey, Hartington, Neb., was manning the camera. I was doing the shooting. Very poorly, I might add.

I no longer attach a bipod to my rifle when coyote hunting. I’ll save that for prairie dog hunting. Coyotes are just too unpredictable.

I don’t know what it is, but I seem to better remember the coyotes that got away than those we’ve put down.

This was many years ago, maybe in the late ‘80s. I was on the east side of Lake Sharpe calling coyotes with some friends. Coyotes gathered here in big numbers because of the Canada geese that were keeping a small part of the lake open. It was a tough winter, cold with tons of snow.

“We’ve never been able to call a coyote off of the ice,” I was told.

I counted 12 coyotes out there working around the geese.

But I could see one coming towards us and he soon disappeared behind the bluff in front of us. I laid down and got on the Circe jackrabbit. I did several short series of a rabbit fighting for its life. Within minutes I saw a pair of coyote ears off to my right poke over the snowbank about 50 yards away. I shifted in that direction in the prone position, but never saw the ears or the coyote again. He had circled downwind and that was it.

I shifted back and called again.

I never saw the coyote come in. Suddenly he was just sitting there, 50 yards away. I barely needed to move the gun barrel to put the cross hairs on him. This was going to be easy.

I squeezed the trigger, and missed him clean.

A couple hours earlier, I’d dropped a coyote on a full run 200 yards away with one shot. Go figure. That’s coyote calling.

A couple of years ago Gary and I were calling along the Little Sioux River. We were about 50 yards apart with backs against trees on the fence line. Our camera man was right between us. My call was sending out wounded rabbit cries.

I looked to my left and there stood a big, white coyote, staring right at me. I stared back, and figured the odds of my getting my rifle on him. I shoot left handed so my barrel was pointed about as far away from him as it could be. The rifle was on shooting sticks. The odds weren’t good.

There may have been a time when I could have moved fast enough to have a chance or switch over to a right hand hold and get a shot off, but not any more.

The dog was standing right in front of Gary, not more than 50 yards out, yet he hadn’t seen him.

I was winning the staring contest. The coyote ducked his head which is what they do before they turn and run. I lumbered to my feet as fast as I could, got the gun up, crosshairs on him and shot just as he disappeared into the ravine from which he had come.

Gary still hadn’t seen the coyote, but he heard the shot, and thought one had come in on my side.

I walked to the edge of the ravine and looked around. No coyote. One second faster and I would have had him. But that’s coyote hunting. Actually, I called in five coyotes that day and we didn’t get any of them. Perhaps we should take up knitting.

We were in the middle of the Nebraska Sandhills, somewhere around the Loup River. Gary and I were sitting side by side and a coyote appeared at the top of a bluff not more than 50 yards away. Gary lined up on him and fired.

“I’m not so sure,” Gary said. And he was right. There was no coyote lying up there.

On the next stand we were separated about 30 yards. A coyote had appeared behind us and was running in hard. I was above Gary and could see the coyote, but Gary couldn’t. I signaled, and Gary got ready, his rifle resting on shooting sticks.

The coyote came in on a dead run right past Gary, not more than 20 yards away, but when Gary swung with him the shooting sticks collapsed and the shot went into the ground. That’s coyote calling.

Last year we were in Nebraska over in the Verdigre area. We were hunting with Bill Christiansen, a friend from Hartington who owned the land.

I had just shot a coyote on the first stand and this was the second. It was a terrible place to set up. The wind was all wrong, but it was all we had so we took it. We backed into a big Cedar, spread out so we could cover all the way around.

I had just finished one series of calls when a big coyote charged up out of the ravine along side of us. Gary swung to get on him and the coyote turned downhill. Bill got a glimpse but not enough time for a shot. Surprise. Surprise. That’s coyote calling.

I could go on but we’re running out of room. Let’s just conclude by saying, coyote calling isn’t as easy as it looks.

← Prev: Cold Weather & Hardwater Angling By Gary Howey Next: Simplicity is the key to outdoor success By Larry Myhre →