With the potential for 1.5 million rooster harvest, Pheasants Forever stays the course for wildlife habitat

Brookings, S.D. – August 27, 2015 – The South Dakota Game, Fish and Parks (SDGFP) has released their annual pheasant brood survey and the results show a 42 percent increase in the statewide pheasants-per-mile index compared to 2014. Elated by this report and the 150 percent increase overall since pheasant abundance reached a recent low merely two years ago, Pheasants Forever continues to stress the importance of habitat and conservation program availability in South Dakota for long-term sustainability of pheasant populations.

Dave Nomsen, Pheasants Forever’s director in South Dakota and who leads the organization’s regional office in Brookings, views the recent increases as motivation to continue charting a roadmap for further habitat programs in the state. “Pheasants Forever is thrilled to see rebounding pheasant numbers which will make for a great hunting season in ‘The Pheasant Capital.’ Still, we must keep in mind the obstacles in subsequent years related to pheasant habitat loss. In the next five years alone, South Dakota is set to expire nearly 390,000 acres of CRP. Pheasants Forever is advising state leadership to consider more strategic conservation programs to help safeguard South Dakota’s pheasant hunting traditions over the long-term.”

South Dakota has begun taking steps to replace the 1.8 million acres of grasslands and prairies lost since 2006, including the formation of a Pheasant Habitat Work Group, requesting more acres of CP-38 (State Acres for Wildlife Enhancement), and forming local advocacy groups – the Aberdeen Pheasant Coalition for example – to fund habitat improvements and increase landowner participation in conservation programs. Nomsen says additional near-term steps can contribute to the pheasant rebound, including increased funding for the South Dakota Conservation Fund and funding to re-open enrollments for the James River Conservation Reserve Enhancement Program (CREP) – with funding, nearly 20,000 more acres of pheasant habitat could be enrolled.

“Habitat continues to be at the forefront of the conversation and is a crucial factor in pheasant numbers,” stated Kelly Hepler, SDGFP Secretary. “Bird numbers are higher in parts of the state where quality habitat conditions still exist, primarily on grasslands including those enrolled in the Conservation Reserve Program as well as fields of cereal crops such as winter wheat. We continue to work in cooperation with the Governor’s Habitat Work Group, landowners, partner organizations and agencies to provide an improved future for wildlife habitat in our state.”

South Dakota’s 34 Pheasants Forever chapters account for 6,300 members statewide. Those chapters have spent $4.9 million to complete over 25,000 habitat projects since the first South Dakota chapter formed in Minnehaha County in 1985. Those projects have improved 380,000 acres for wildlife.

← Prev: Drifting the Missouri River for catfish makes for a good day By Larry Myhre Next: The Edge When it comes to Hunting By Gary Howey →

END_OF_DOCUMENT_TOKEN_TO_BE_REPLACED 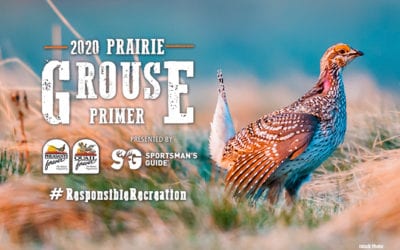 IT’S TIME: PRAIRIE GROUSE SEASONS ARE JUST AROUND THE CORNER By Pheasants Forever

IT’S TIME: PRAIRIE GROUSE SEASONS ARE JUST AROUND THE CORNER. HERE’S WHAT YOU CAN EXPECT OUT IN THE BIG WIDE OPEN, PLUS INSIGHTS FOR PLANNING YOUR...