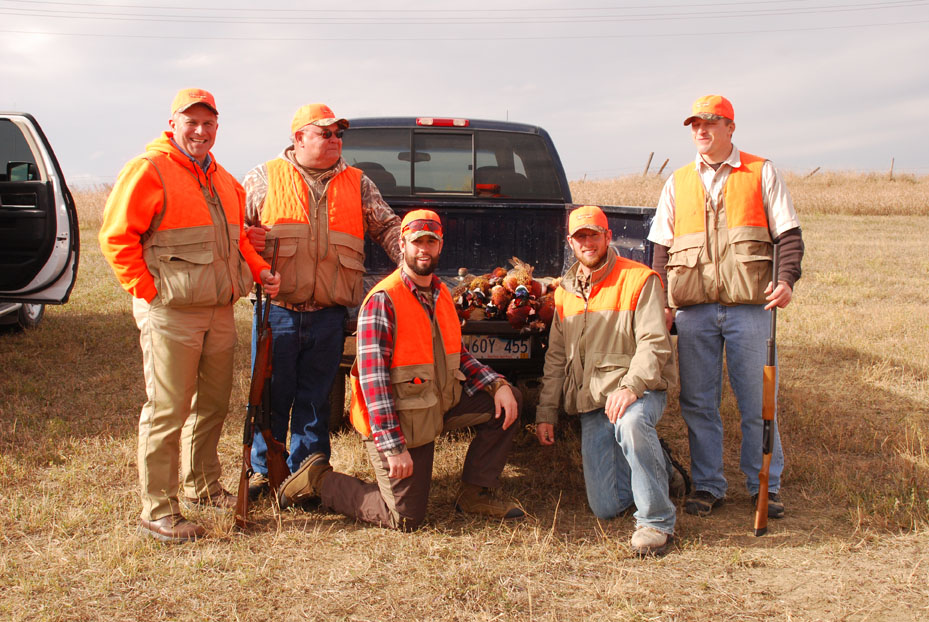 Team Outdoorsmen Products members Jim Hamilton, second from the left and Simon Fuller far right along with several other hunters with the birds they took a few years back in South Central South Dakota. Photo By Gary Howey)

Original coming from Watertown, S.D., I know how the Pheasant Opener is like a holiday with Family, Relatives and Friends getting together to take part in this great event.

Every fall, since the original South Dakota 1919 pheasant opening weekend, finds hunters and non-hunters alike traveling to South Dakota, bringing with them extraordinary enthusiasm, excitement as they make their way to the South Dakota’s cities and rural communities across the state.

The opening weekend it appears to be a gathering of families, friends and relatives as the return to take part in some of the finest pheasant hunting in the nation.

I’ve had an opportunity to talk with friends that hunt and other hunters who live in different parts of South Dakota indicating, where you find habitat, you’re going to find the birds and should be pleasantly surprised by the bird numbers.

Pheasants Forever’s Regional Pheasant Field Report gives hunters a very good indicator of how the 2021 season will be in different parts of the states, with much of this information coming from the Game & Parks personnel and the Pheasant Road Counts.

According to Nick Cochran, SDGFP conservation officer for Brown County “Habitat conditions aren’t terrible, but we were awfully dry there for a while,”. “Peak hatch up here is usually in mid-June, and during that time we were over 100 degrees for three or four days.”
He believes variable habitat conditions and the haying of CRP and CREP ground in the area will force hunters to bounce around more than usual to find birds. Overall, however, he thinks hunters can still find good numbers of birds in the area.
He says “We didn’t have a great hatch, but we still have pheasants,”. “We did have a good carryover of adult birds, so they might be a little tougher to outsmart

In the north-central part of the state, PF Farm Bill Biologist Isaac Full thinks good numbers of adult birds will make up the lion’s share of the pheasant harvest this fall.
“Honestly, we’re not doing that bad. I’d say the pheasant population in this area is just below what it was last year and that most of the birds we’re going to see this fall are coming out of last year’s hatch.

Now, if you ask the locals who’ve lived here their whole lives and have seen the heyday of pheasant hunting, they’re going to say we’re far below what’s considered really, really good for bird numbers.”
“We have a lot of managed hay in this area, so we lost a lot of habitats in early August,” he says. “I can’t remember the exact total, but it’s safe to say we lost upwards of 3,000 acres of grass. There’re still large tracts of public land both here and then further west on the other side of the Missouri River where hunters willing to grind it out and wear out some boot leather will have plenty of opportunities to get their birds.”

PF Farm Bill Biologist Derek Hartl, who works with landowners in Jones, Stanley, Haakon and Jackson counties further down the Mighty Mo in the central/west-central part of the state, says that the primary pheasant habitat looks good for fall.
Hartl also reports that the broods he’s seen this year have been smaller than average and seem to have hatched later than normal, perhaps during a second or third nesting attempt. Interestingly, similar reports came in from across the state, where newly hatched or week-old chicks were seen well into the month of August.

“We believe that the nesting season was pushed back a little bit due to the drought, so we expect to see a lot more younger birds this fall,” says Hartl. “With everything considered, I still expect a good turnout of birds for this fall. Hunting might not be like past years, but you should have some good opportunities.”

Kendall Hettick, a PF Farm Bill biologist covering Lyman, Tripp, Gregory and Stanley counties. “In talking with landowners, it seems that numbers might be down some this fall,” says “While doing fieldwork, I’ve seen a fair number of adult birds but limited broods, some of which still have a long way to go to reach maturity. I’ve seen a lot of variation in brood size and age this year, suggesting there were a lot of re-nesting efforts from hens after a failed first clutch.”
“While numbers are down, there are still birds around, and they will be more concentrated with a lot of the habitat being hayed this year,” Hettick continues. “All things considered I think pheasant hunters will still be able to harvest birds this fall if they’re willing to work a little bit for them.”

Further east along the I-90 corridor, landowners in Aurora, Davison, Sanborn and Hanson counties couldn’t buy a drop of rain through June and July, but places with high-quality habitat still produced birds.
Tim Kromminga and Kirk Waugh own a hobby farm by Stickney that they manage primarily for deer hunting, but they also shoot a pile of pheasants each fall. Their habitat complex has trees, wetlands, food plots and CRP, and Kromminga believes pheasants fared well this year in spite of the drought.
“We are concerned about the lack of bucks we are seeing,” Krommenga admits, “but I think it’ll still be a pretty good year for bird hunting. I have seen quite a few broods, and the last time I was out there at the end of August I was seeing last year’s birds running around, too.”
An hour to the northeast in Miner County, SDGFP Conservation Officer Evan Meyer believes pheasant hunting will be comparable to last year.
“Overall I think we had a good spring, but we some CRP acres were hayed in August in the western part of Miner County over into Sanborn County,” Meyer states. “I’ve also seen a lot of smaller birds later in the year compared to normal, so I think plenty of hens re-nested after they lost their first nest or two.”

Gary Howey, Hartington, Nebraska is a former tournament angler, fishing & hunting guide, an award- winning writer, producer, photographer and broadcaster and in 2017 was inducted into the “National Freshwater Fishing Hall of Fame.” Howey is also an award-winning writer, producer, broadcaster, former tournament angler, fishing and hunting guide and in 2017 inducted into the “National Freshwater Fishing Hall of Fame”.  He developed and was the Producer-Host for 23 years of his award winning gary Howey’s Outdoorsmen Adventures television series. He’s the Host of the award-winning Outdoor Adventures radio program carried on Classic Hits 106.3, ESPN Sports Radio 1570 in Southeastern South Dakota, KWYR Country 93 AM and Magic 93 FM in Central South Dakota, As well as on KCHE 92.1 FM in Northwest Iowa.  If you’re looking for more outdoor information, check out www.GaryHowey’soutdoors.com , and www.outdoorsmenadventures.com, with more information on these Facebook pages, Gary Howey, Gary E Howey, Outdoor Adventure Radio, Team Outdoorsmen Productions.

← Prev: THE GAMEKEEPERS OF MOSSY OAK-6 Truths about Whitetail Rubs By Todd Amenrud Next: Fall, is some of the Best fishing there is!  gary Howey →