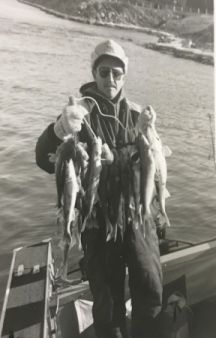 Smaller Jigs are very effective as winter rolls into spring. Bruce Pitzer, Oakdale, Nebraska, my tournament fishing partner with a nice stringer of early season walleye & sauger. Bruce is one of the best jig fishermen that I’ve had the opportunity to fish with. (Gary Howey Photo)

Springs here, when walleye anglers will be chomping at the bit to get on the water.

As the water opens up, allowing anglers to get their boats in and below the Missouri River dams; Gavin’s Point, Ft. Randall, Big Bend and Oahe Dam Walleye anglers will have all they need in order to pursue walleye during the 2021 fishing season.

The walleyes have been on the move since late fall, swimming upstream into their spawning areas.

This is the time of the year to catch that wall-hanger walleye you’ve been looking for as the fish are stacked up below the dams with the females as big as they’ll ever be, carrying their eggs along with their fat reserves.

In late winter, early spring, everything is slow underwater, so slow and easy is the name of the game this time of the year, when things move slowly, the water is cold as is the walleye’s metabolism.

This time of the year, smaller is better, as walleye have a lot of time to check out your bait and anything that doesn’t seem natural or right will turn them off quickly.

This is when you don’t want to be using a method that doesn’t fit with the season, where one of the best Live bait rigs, might be fishing with just be a small split shot, smaller hook and minnow that’s just enough to get your bait to the bottom where the walleye will be roaming.

Other tackle that will help you fool fish this time of year include light low visibility line, this is when I never go over eight-pound mono, and have several other rods rigged with lighter four or six pond test.

I start with my 8-pound mono line and if you see fish on you locator, but get no response, I’ll switch to my lighter lines to see if that makes a difference or I may try my one rod rigged with lighter line, that had a couple of feet of fluorocarbon line on the end where you’d tie your hook.

What you don’t want to do is to have too much of anything that’s not natural down there, any terminal tackle and if you feel you need a snap or swivel, I’d use a very small one.

As February rolls into March in many areas, most walleyes have now moved towards or into their spawning grounds, where you’ll start to find them moving around more and becoming more aggressive.

In the river, the water below the dams, may have been free of ice throughout winter, allowing boat anglers their first, end of winter and spring open water fishing opportunities.

There are several walleye patterns seen as late winter works its way into early spring, these fish will generally set up out of current, in the calmer water, where they can rest and not have to fight the current, still having the ability to take advantage of the good feeding opportunities that’s available in these locations.

Those fish generally setting up along the edges, in the faster current are more than likely be the smaller more aggressive males.

The long upstream run that the walleyes made, using up much of their excess energy, eventually be forced to begin to feed more actively.

Because the walleyes will be located in calmer areas, slowly drifting a live minnow rig or a smaller minnow tipped jig through these locations is a great method for catching walleyes.

Once you’ve located walleyes, You may want to set up and fish vertically above the fish which is a very effective method.

You may have to switch baits until you figure out what the fish want, don’t worry about trying to match your bait to exactly what the fish are after, a jig baited with a minnow on or just off the bottom kept in front of the fish will result in bites.

If your locator indicates that the fish are suspend targeting a baitfish species using that area, this is when fishing out of the current that a floating jig head rigged under a slip bobber works very well.

There’s also other feeding opportunities this time of the year, when walleyes are feeding on insect larvae such as nymphs, especially in locations with a dark or muddy bottom as it’s very common during the early season that there may be an, as insects hatches occur at different times of the year.

I’ve found that at times, by checking the stomach contents of a freshly caught walleye, you’ll find a good indicator as to what the fish are feeding on.

To tell if the fish are feeding on insects, their larvae in the walleyes stomach looks like a dark gob and because of the cold temperatures, cold-blooded fish will take longer to digest its prey and figuring out what they’re feeding is much easier.

When fishing tournaments and guiding, my fishing partner, Bruce Pitzer, Oakdale, Nebraska and I used his Dinner Belle jigs tied with marabou, giving that jig just a bit of added natural action that made a big difference on the amount of early season bites.

As mentioned earlier, by using lighter line, you can get a smaller jig, 1/16th of an ounce tipped with a minnow down and into the depth the fish are holding.

This time of the year the “Name of the Game” is smaller is better and with good boat control you can set on top of the walleyes and even if they’re not hungry, irritate them into biting.

Every day we’re closer to spring and all of the fishing opportunities that will be available, so as we’re in that in between season, Ice and open water, get your boat ready and we might just see you on the river.

Gary Howey is an award-winning writer, producer, and broadcaster and inducted into the “National Freshwater Fishing Hall of Fame” in 2017. He developed and was the Producer- Host of the Outdoorsmen Adventures television series for 23 years. He’s the Host of the award-winning Outdoor Adventures radio program carried on Classic Hits 106.3, ESPN Sports Radio 1570 in Southeastern South Dakota, KWYR Country 93 AM and Magic 93 FM in Central South Dakota, As well as on KCHE 92.1 FM in Northwest Iowa.  If you’re looking for more outdoor information, check out www.GaryHowey’soutdoors.com , and www.outdoorsmenadventures.com, with more information on these Facebook pages, Gary Howey, Gary E Howey, Outdoor Adventure Radio, Outdoorsmen Productions and Team Outdoorsmen Productions. The Outdoor Adventures television show is available on numerous Independent markets, and the MIDCO Sports Network.