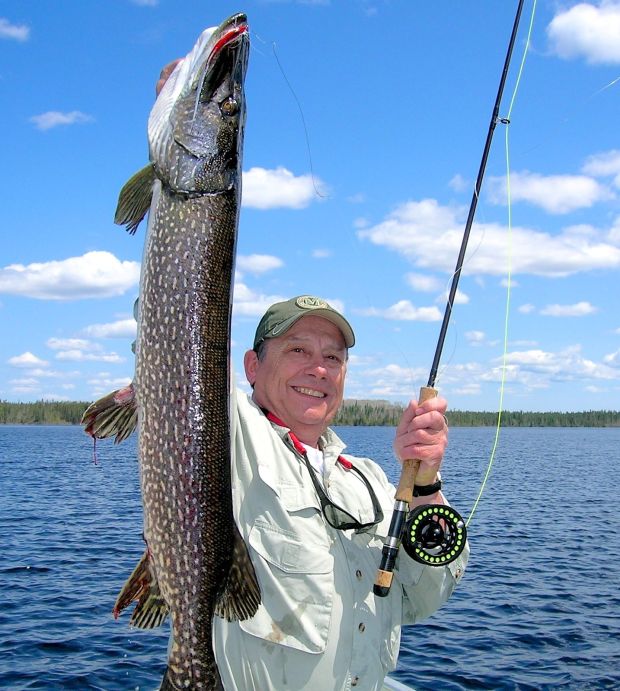 Springtime is the time for big northern pike. They are spawned out, and feeding big in shallow water in very predictable areas. Now is your best chance for a trophy.

The sun was beating down on this small, northern Ontario lake. But that was a good thing. It was only a few days after ice-out, and a warming sun often prompts big northern pike to put on the food bag.
My friend and I had booked a two-week trip into a fly-in lake even farther north and our intent was to fish the big shallow bays for monster northern pike.
Problem was, the ice just wouldn’t leave this year.
In order to save the two-day drive to get to where we were now, we elected to get on the scene so when the lake opened up we’d already be there. An hour flight would put us in camp.
We had already lost more than a week of our booking, but languishing around our bed and breakfast lodging was not what we liked. So, what about this little lake? Any fish in it?
We were told no. A gold mine up the watershed had polluted the water. The walleyes were gone.
But what about northerns? Maybe, we were told.
So we looked at a lake map. There was a stream flowing in along the northwestern corner. If there were northerns here, they would be there. Right now.
We scrounged up a 16-foot boat and a small motor and off we went.
Using fly rods, we made a drift right in front of the small stream.
And what happened, you would have to see to believe.
If there is a heaven for northern pike fishermen, we had fallen into it.
Fish after fish, most over 40 inches long and pushing 20 pounds fell for the big Lefty’s Deceiver flies I had tied. Our arms were so tired from casting the big rods and fighting the big fish we began trolling. Trolling with a fly rod. I had never done that, but it worked.
Our best fish measured 43 inches. We were confident there were even bigger ones there and began working our way up the creek.
Then the cell phone rang. Part of the lake had opened up at the camp we had booked. The float plane would leave as soon as we could get back to shore. We would have the rest of this day and two more on that lake before the flight out.
So much for our two-week booking.
But the point of all this is that ice-out pike fishing can be fantastic. And you don’t have to go to Canada to get in on it. Any of our lakes in northern Iowa, South Dakota, North Dakota or Minnesota, will offer great pike fishing right now.
So how do you find them.
Two things. Shallow bays. Current.
Northerns move into shallow bays to spawn. They are there before the ice leaves the lake, and they will stick around for at least two weeks. Later they will move out into the main lake, and once summer arrives they will go deep and most likely never see a fisherman’s lure.
Current is also a draw.
Northerns often ascend small creeks to spawn. I remember seeing northerns in the little creek at our South Dakota farm in the spring. That creek was a tributary of another, larger creek which eventually dumped into the Big Sioux River over 12 miles away.
The mouths of these creeks will hold the fish after they return to the lake. And they will remain there for a couple of weeks. Look for any kind of structure in the area. That’s where they will be.
The creek on that small Ontario lake was why those big northerns were there.
I should point out that small northerns, those of 5 or 6 pounds, will remain shallow all summer. But the hogs will go deep. Mostly. There are exceptions.
Flash back 30 years. I’m in Greenwood Bay on Lake Vermilion in northeastern Minnesota. We’re drifting just before dark in my little 16-foot boat and the kids are casting spoons for northerns hiding in the submerged weeds.
I eye a big, and I do mean big, spinnerbait I made the winter before. I wonder how it will look in the water so I tie it on without a wire leader. No fish in here big enough to engulf that bait.
First cast.
I watch the bait do its stuff in the clear water. Suddenly I see a pair of big eyes right behind it. I continue reeling, and watch as the big northern opens its mouth in a flash of white and my spinnerbait disappears as the fish whirls back with it. I barely feel any pressure as the northern’s teeth parts the line.
I sit down and reel in the loose line. I’m shaking a little bit as the adrenaline kicks in, but one of the kids has another hammer handle northern on and I grab the net.
One thing I’ve learned over the years about fishing. Never say never.
But what about that big fly-in lake. The ice had everything socked in, but there was one bay we could reach. It was not a bay we would have fished if the lake were open, but it was absolutely packed with big northerns.
We fished it two days. We each had fish measuring 45 inches. Those are nice fish, anywhere. But I don’t think they beat 30 pounds, and that was our goal.
You don’t hear much about it anymore, but Lake Oahe in April is a great northern pike fishery. Again they are in the bays roaming about looking for something to eat. Anglers in the know will offer them frozen smelt by still fishing on the bottom without any weight on the line. And that 30 pounder? Many of them are swimming there. You could do worse than pursuing your big pike there.

← Prev: Turkey Decoys By Gary Howey Next: Tips to Tip the Impossible Tom →