When I started, hunting turkeys back in the 70’s it was a new sport in this part of the country and we learned as we went along.

Hunting turkeys with decoys was the furthest thing from our minds.

A friend of mine from Crofton, NE. heard about hunters down south using decoys to draw gobblers into shotgun range and since none was available in our area, he made one. Using an old Styrofoam Canada goose decoy, he whittled on it and then painted it to resemble a turkey, well, kind-o- sort of! It looked like a deformed, mostly black Canada goose that had gotten in a fight and LOST. It was bulky, made a lot of nose when going through the woods, but it worked.

If I was going to be serious about turkey hunting, I had to have one and when the first plastic expandable hen decoys came out, I got me one. They folded flat, and could be spread out, bulking them up by using the T-handle stake, making them appear larger. I could easily carry the folded up decoy in the game pouch of my turkey-hunting vest. Since they were hard plastic, they too made a lot of noise when walking through the trees.

These first decoys were upright, because of the stake they were on, stuck up in the air quite a ways with the decoys head in the alert position, the way turkeys hold their head when they are alerted, looking around.

To keep my decoy from being positioned too high in the air and to get it out of the alert position, I shortened up the stake, lowering it closer to the ground, tilting it forward into more of a feeding position.

Then there were the foam decoys, allowing me to carry several of these decoys in my game pouch. This is when Ii started experimenting with putting the hen decoy in the breeding position. I’d place my hen decoy flat on the ground with the Tom positioned a short distance away looking in her direction. This worked well until the wind came up when the foam decoys would jump around, working its way out of the ground, and flying off across the field with me in hot pursuit.

Since then, I have used any number of decoys, some in groups of two, on up to a whole flock, experimenting with silhouette, full bodies, stuffed birds and inflatable decoys.

Today, turkey hunters have a wide variety of turkey decoys they can use. If you are just getting into turkey hunting, it can be confusing as there are so many decoy postures. There’s the

feeding, breeding, submissive, alert, strutting and so on and so forth.

There are several things I look for when I choose a decoy or decoys that I plan to use in the spring. The time of the season and how the Toms are putting together their harems re a few of the things you want to consider before heading out into the woods.

When putting out turkey decoys, you want to use a decoy or decoys that aren’t going to alert the birds, a position like the feeding hen, as it is the most natural position in nature.

Almost all turkey flocks have some feeding hens, which are followed closely by strutting Toms, and it doesn’t get more realistic or relaxed than that. The other position that works in a flock situation is the breeding (hen on the ground) position. Since the breeding position puts the hen on the ground, they are hard for the Tom to see so you need an upright decoy to get the gobbler’s attention.

I use a basic, realistic decoy set up, which is a feeding hen, strutting gobbler and an alert (lookout) hen. The number of decoys, how they will be set up depends on the terrain I’m hunting in.

My most productive set ups are field set-ups or in a clearing where the gobbler can see my decoys. Because turkeys are social birds, if they hear calling and don’t see birds or decoys, the jig is up and they will go looking or other turkeys. 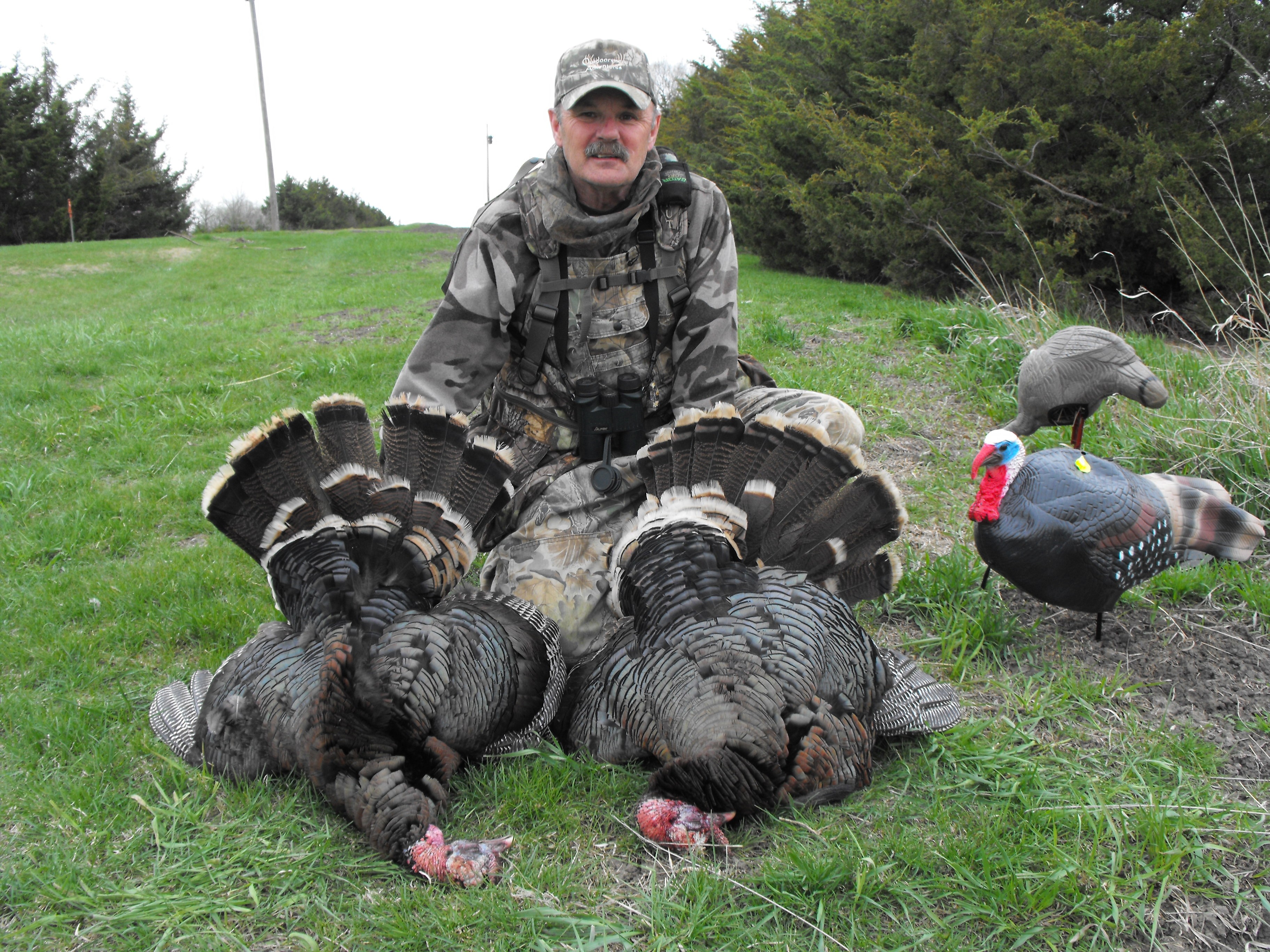 A feeding hen and Jake decoy helped the author call in these two mature Toms at the same time during a South Dakota Spring turkey hunt.

What decoys you put out can depend heavily on the social structure of the birds. If it’s early spring and the gobblers are messing around, just starting to put their harems together, a good decoy to deploy would be one that’s strutting or upright gobbler.

When I’m hunting in areas where there are a lot of jakes, those running in packs, ganging up on adult gobblers, I’ll go with a single jake as a single bird isn’t going to spook an adult Tom.

When purchasing a strutting Tom decoy, check out the most important part of the decoy, the tail as it’s the tail that the gobblers see and the more realistic it is the better.

While hunting in the Ozarks of Missouri, a friend who lived in the area showed me how used a fan to attract turkeys. Dressed in total camo, he would belly crawl with the fan out in front of him. When the Tom saw the fan, it would strut and move towards him, by moving the fan from side to side, he drew the bird within shotgun range of his clients.

Since that time, I’ve experimented using a turkey fan to attract gobblers and have had some luck using just a fan.

On one trip, since I had filled both of my tags, I switched roles with my cameraman, filming and calling for him. I set out a hen decoy off to his left approximately 30 yards in front of him. Then, I placed one of last season’s gobblers turkey fan against a small tree. To hold it in place, I drove a stake on the backside in the center of the fan and tied it loosely with fishing line so it would move in the breeze.

We got settled down and I made a couple of quiet, low calls when a gobbler and a Jake responded from the other side of the ridge and came trotting over the ridge, both birds paid no attention to the hen decoy, charging towards the turkey fan that was fluttering in the wind. My cameraman tipped him over as he was making his move on the bodiless fan.

Decoys, whether they are silhouettes, foam, hard plastic full bodies or even just a fan help to draws that gobbler into range. If he is looking at the decoy, it’s a good bet he will not be looking directly at you, giving you the opportunity to bring your gun up, draw a bead on the trophy you have been dreaming of since last year’s turkey season, allowing you to fill your spring turkey tag.