That Fall Transition When things Turn upside Down   By Gary Howey 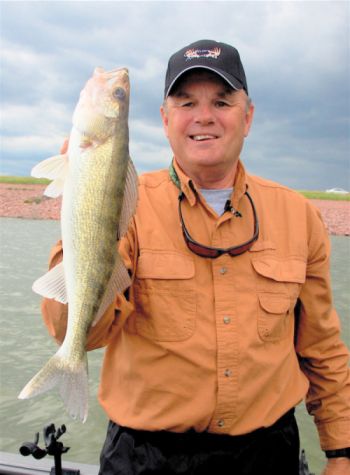 Fall will be here before you know it when things will begin to change in the lakes, when they turn over, where the water in the lake actually turns over, with the water from the bottom comes up, and top water going to the bottom.

During this time, fishing conditions are tough as thee water becomes muddy and murky.

During the summer, where the surface layer, the warmest water, is heated by the sun, with the deepest water being the coldest, as the sun’s radiation doesn’t reach that cold, dark layer.
During the fall, the warm surface water begins to cool. As water cools, it becomes denser, causing it to sink. This dense water forces the deeper water to rise, “turning over.”

Because of this fall transition, turn over the walleyes, will make a move as the water begins to cool, as the turn over occurs.

Pro-angler Rick Olson from South Dakota explained it this way,” as water temps reach their summer high, a layering process occurs, with an upper warmer layer and a lower cooler layer separated by a quickly changing narrow band known as the thermocline.

This deeper, cooler, bottom layer can quickly become totally void of oxygen, when fishing the dead water can a complete waste of time.

You’ll want to concentrate your efforts at the thermocline and shallower water.

Your locators, fish-finders display the density of objects, with the upper warmer layer being less dense than the cooler bottom layer, it’s this change in density that will show up on a graph, looking like a constant narrow band.

Some lakes are so shallow and windswept that they may never thermocline, like Minnesota’s Mille Lacs.

The big lake circulates every time you get a decent wind, and the temperature remains relatively consistent from top to bottom.

It’s not just the fact that a lake will turn over that causes tough fishing conditions, more than likely due to the rapidly-dropping water temps.

The body temperature of a fish is subject to its environment, rapid changes in water temp can shut fish down and it may take some time for their body to adjust.

The turnover usually coincides with the first hard frost of fall, but not always. Some years the change is so gradual that it becomes difficult to pin down.

One of the indicators to look for is water temperature, when surface temps drop into the lower 60s and upper 50s, you can figure you’re in the turnover zone.

Walleye activity can range from bad to good depending on how quickly water temps cool off. A gradual slide can make for better fishing.

Late summer and early fall can be one of the best times to work the shallow rocks with Shad Raps being the most effective crankbait for working shallow structure there is, with its perfect fish-attracting wiggle and some great fall colors like ‘fire tiger’ and ‘crawdad.’

Another option, would be avoiding the negative effects of the turnover by trying to find a lake that hasn’t turned yet, or one that already has and had a week or two to settle down.

The first ones to go are the shallow lakes as they have less mass and cool quicker and there may be as much as two weeks or more difference, when it all begins and ends.”

As far as baits to use during the fall, when the fish are chowing down in preparation of the winter, the hard water season, here’s some ways to take these transitional fish.

Several years back, I was on the water with Team member Steve Iso at Merritt Reservoir south of Valentine, Nebraska, where he introduced me to “Snap Jigging”, it’s not a method that some walleye anglers know about, but one that’s very affective.

One the fish were located, Steve and I were fishing in some of the shallower water, around ten feet or so, in an area where there’s still some green vegetation (Cabbage or Coontail) nearby where there are both prey fish and predators.

We were using heavier jigging spoons, letting them drop, then snapping them back up, we would get most hits as the spoon fluttered back towards the bottom.

We also used this method where we found baitfish along wind blown points with rocks and gravel, in water from about four to ten foot.

If the bait is in these areas, you can bet that the walleye that like to roam in the fall will be there.

Because fall is when the fish are pigging out, other anglers were using heavier jigs, with those with the longer hook and a stinger hook working best.

Some were using the jigs with larger plastics, like the Northland Impulse baits, casting them as far away from the boat as possible, letting the jig hit bottom and then snapping the jig back off the bottom. Since the fish may be coming up behind or following the jig, it’s a good idea to let it set on the bottom for a couple of seconds, giving the fish the opportunity to take the bait.

Other anglers use heavier jigs with longer hooks, tipping them with large Creek Chubs or other large baitfish and because they’re using larger baits, a stinger hook attached to the rear of the chub as needed, hooking the fish as it attempts to inhale the large bait.

These baits mentioned above will also work when fishing from shore. When shore fishing, it’s best to fish where the wind is blowing into the shoreline as the wind blows the algae and plankton to that shoreline, with the baitfish who feed on this, along with the predators that will feed on them.

Areas where you can find a clean hard bottom, with rocks, sand and gravel bottoms is an excellent place to start.

When fishing from shore, a dropper rig works well, to set up this rig, on my mainline, I like a 20-pound test, that can be either monofilament or a braided line, slide your dropper line rig swivel over the main line, tie on another swivel with a four foot piece of twelve-pound mono, and depending on what species your hoping to catch a large enough hook to hold your larger bait.

On the sliding swivel dropper line tie a two to three feet piece of lighter mono, in ten to twelve-pound test with a sinker, I find the ball type sinker works the best, with the weight of the sinker, around 2 ounces or larger, depending on how much current you’ll be fishing in.

The sliding swivel lets the weight slide up and down your line, and when the fish picks up the bait will be able to run with it, not feeling much resistance.

The lighter line on the dropper rig, if snagged allows me to break the line and lose only that short piece of line and sinker and not the entire rig.

Cast your line out as far as possible, allowing the sinker to hit bottom, then bring or snap the rig off the bottom, continuing to fish this way this as your rig comes toward shore, when you feel a hit, set the hook hard.

You can also use this rig using a shoreline rod holder that can be securely placed into the shoreline.

After casting out, allowing the rig to set on the bottom, the key to using it this way is to have your reel drag set loose and when a fish takes the bait, to quickly remove the rod, adjust the drag and fight the fish.

In the fall, the fish want larger baits, so it’s big bait time, with creek chubs or some other oily baitfish working the best.

During this turn over, one lake may be just turning over while another may have finished or not started, so look around and by using the above-mentioned methods, this fall may be the time you catch one for the wall.

Gary Howey is an award-winning writer, producer, and broadcaster and inducted into the “National Freshwater Fishing Hall of Fame” in 2017. He developed and was the Producer- Host of the Outdoorsmen Adventures television series for 23 years and is the Co-Host of the award-winning Outdoor Adventures radio show. If you’re looking for more outdoor information, check out garyhoweysoutdoors.com, and outdoorsmenadventures.com, with more information on these pages, Gary Howey’s Facebook page, Outdoor Adventure radio and Team Outdoorsmen Productions Facebook page. The Outdoor Adventures television show is available on the MIDCO Sports Network, and News Channel Nebraska.

← Prev: Managing Predators for More White-Tailed Deer BY MARK MCCONNELL Next: Before putting it away, Winterize your Outboard By Gary Howey →