“Of the Outdoors” The Paddlefish 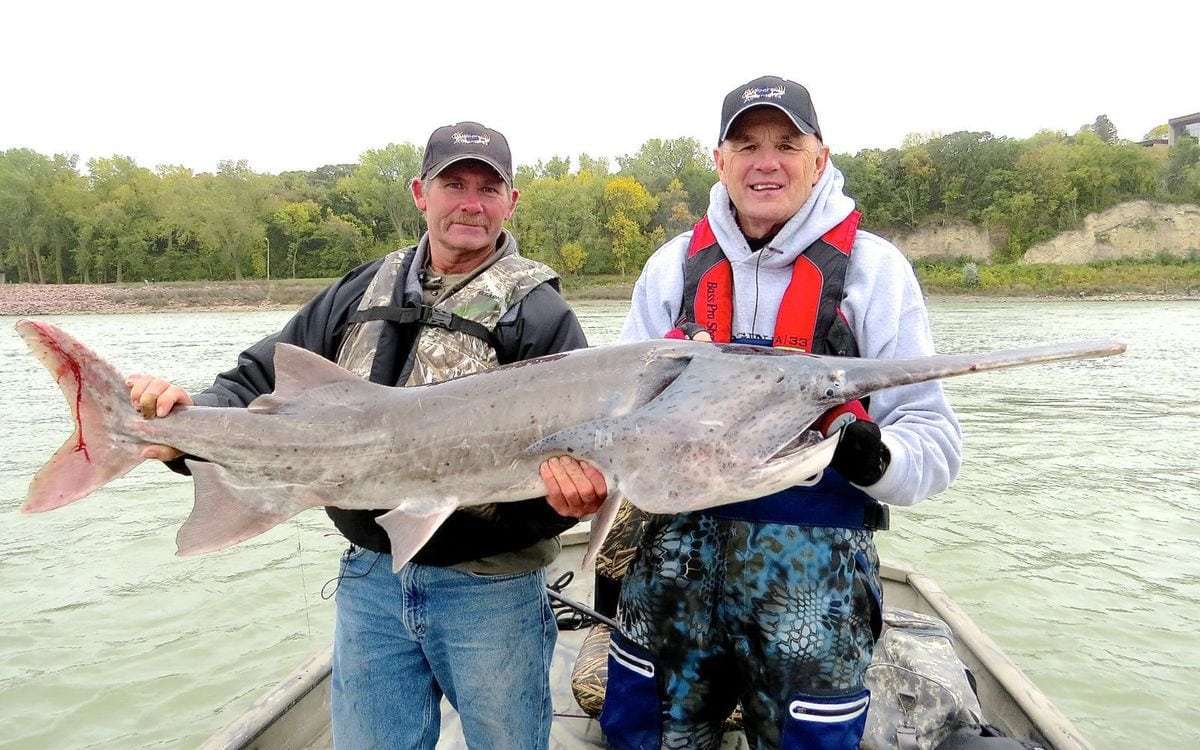 “Of the Outdoors” The Paddlefish

Paddlefish, a prehistoric looking fish whose skeleton has few bones, only a cartilage running from their head to their tail.

Unlike other fish with scales, the paddlefish is smooth-skinned, with a shark-like body and an elongated, paddle-like snout, which is often up to one-third of their total length. Their paddle and head contain tens of thousands of sensory receptors used for locating swarms of zooplankton. They have a huge toothless mouth on the bottom of their head and are a powerful fish with a deeply forked tail.

Fossil records of paddlefish date back over 300 to 400 million, nearly 50 million years before dinosaurs first appeared.

There are two Paddlefish species in existence, the American paddlefish, found in the Missouri and Mississippi Rivers and their tributaries and the endangered Chinese paddlefish found in the Yangtze River in China.

By now anglers in Nebraska and South Dakota know if they drew snagging permits which were applied for the first two weeks in July.

Unfortunately, for me and many other anglers who failed to draw a snagging permit this year, we will have to wait until the next application period and hope we have better luck in the 2019 drawing.

The Nebraska and South Dakota paddlefish-snagging season opens up on October 1 running through the end of the month.

October is the month when huge concentrations of anglers, those who drew snagging tags will descend on the waters below and downstream of Gavin’s Point Dam to try their luck at snagging a paddlefish.

Because they are filter feeders, traditional fishing methods will not work on these prehistoric fish, as they can only be taken by snagging. Open waters for snagging in Nebraska and South Dakota runs from Gavin’s Point Dam on down to the Big Sioux River.

These fish are one of the largest, native freshwater fish in North America, reaching lengths of more than six feet, weighing over 100 pounds, with the South Dakota state record weighs more than 140 pounds, while the Nebraska record is over 113 pounds.

Historically, paddlefish were free to travel great distances, migrating up to 1200 miles to reach their spawning grounds.

With their migration blocked by the construction of Dams on the Missouri River, and the changes in their natural habitat there was a decline in their numbers.

Because of these factors, there were changes made on how they issue tags. These permit/tags issued on a limited-drawing basis, with both residents and nonresidents tags available in both Nebraska and South Dakota.

Those with a tag can take one legal size paddlefish with all fish measuring 35 to 45 inches from the eye to the fork of the tail returned to the water, as these fish are the main spawners.

Paddlefish are powerful fish and it takes either a heavy bait-casting reel spooled with heavy line, fifty pounds on up or a stiff spinning rod with a long forgiving tip with a large spool spinning reel. Snaggers are allowed only one hook and its gap between the hook and the shank cannot to exceed one-half inch.

The weights used for snagging can run from two ounces to eight ounces, with the weight used directly related to how you fish and the amount of current.

It takes a good back to snag a paddlefish, as snaggers need to cast these heavy rigs out, allow them to sink to the bottom and then jerk back on the rod, reel up the slack and repeat this until you hook something.

If you are snagging out of a boat it is still a lot of work, but you can cover more ground by having the boat running back and forth across the current while, the snagger rips the line through the water. If they do not connect, let the hook sink back to the bottom and repeat until they connect with a fish.

Paddlefish prefer quiet, slow-flowing waters where they swim continuously near the surface slowly swimming with their mouths wide open, filtering the water, removing the microscopic plants and animals as the water passes through specially designed gill rakers

Paddlefish live long lives, with some living over thirty 30 years of age. Male paddlefish generally mature at about five to eight years. They spawn in early spring when water temperatures get close to the mid-fifty degree range.

Larger females produce over a half-million eggs, depositing the fertilized eggs over gravel bars in large free-flowing rivers. The best hatching success is in water containing clean gravel with little siltation and good aeration and hatch quickly, in nine days or less, when water temperatures are sixty-five to seventy degrees and able to swim at birth. These young paddlefish look nothing like their parents and it takes about a month before the young paddlefish, start to resemble their parent.

When an angler brings a fish to the boat, the fish should be measured and if it is below or above the slot, it can be kept and tagged in the dorsal fin.

There is a certain way to clean paddlefish if you want excellent eating. Some anglers cut off the tail, allowing the fish to bleed out, others after gutting the fish, cut along the cartilage filleting the meat from the sides of the fish, and then skin the fish from the fillets. Once done with this, remove all and I do mean “all” of the red meat from the fish as if it is not, you will wish you had as the red meat has a nasty taste, you want the meat you end up white and very firm.

Others, because these fish have no bones will gut the fish, then cut the fish into chunks, fillet off the skin, remove the red meat and then soak it in cold water, which is a good ideas as it helps to draw any excess oil out of the fish, helping to firm up the meat.

Some bread and deep fat fry their fish, while others make it much like lobster, boiling it and then dipping it in butter.

My wife breads it and then fries it up in a pan and it is delicious, with a small paddlefish not lasting long in our house.

If you have not applied for a snagging tag, you should, as the fish you snag will test you and your equipment, could be over one-hundred pound or even a state record and will be some of the finest eating fish you have ever eaten.