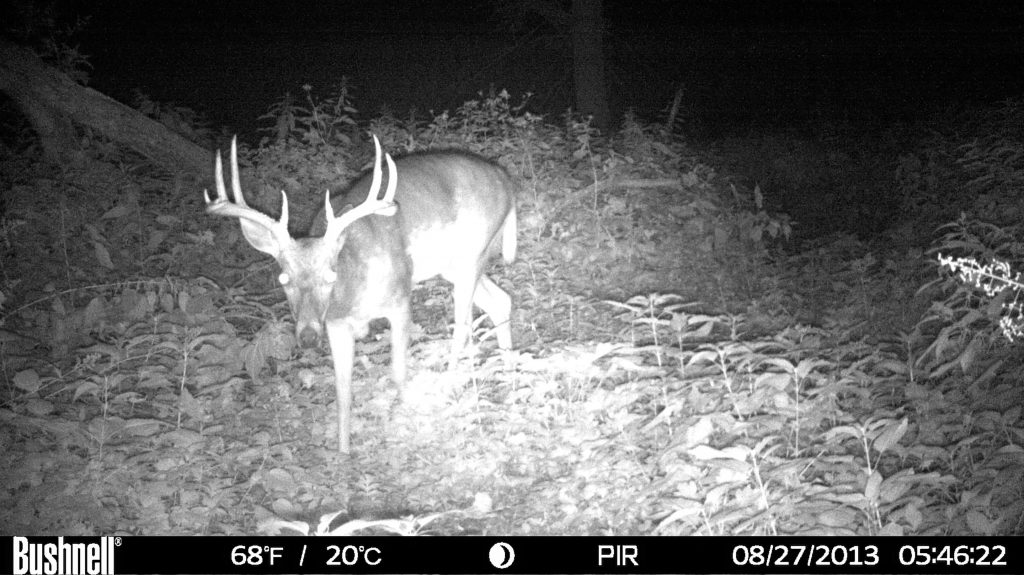 Trail or Game cameras have become a huge part of the deer hunters and wildlife management organization’s arsenal, and because of because of the new technology the cameras have changed dramatically.

In the last 15 years or so, the advance in the technology of digital photography has moved the trail cameras from the Stone Age into the Space Age.

My first cameras were bulky, about the size of a small cereal box and required D cell batteries, which seemed needing replacement every time I went out to check them.

Now they are down to as small as four inches, small enough to fit in your hand, using AA batteries, which last so much longer than the D cell batteries.

Since I started putting out game cameras, which I have several of, my entire method of deer hunting has changed as now I have more time to devise a plan for opening day as I’m armed with this new information from my camera that allows me to zero in on ion I want to be during the opener.

I’ve used trail cameras for years, where my earlier ones had a flash, that did give me good photos, but they also spooked many of the animals that I was hoping to capture on film.

The newer infrared trail cameras take photos or videos and as there’s movement in front of the camera when an animal breaks the beam, an infrared light is emitted providing light for the exposure, without the flash spooking the animal.

When Mother Nature doesn’t cover us up with heavy snow, I use Game/Trail cameras throughout the year. I place them along deer trails, between bedding and feeding areas, near water holes, at fence crossings, on food plots and mineral licks before season to get an idea as to which deer survived the rut and winter, the quality of the deer herd as well as what other animals use the area.

The information you gain from using game/trail cameras will be beneficial when it comes to putting together a game plan for next deer season, eliminating much of the guesswork that we used to depend on before we used these cameras.

Some feel they need to hide, disguise or padlock their game/trail cameras, which is not a bad idea if you’re using them on public ground. It seems there are always a few individuals out there that can’t keep their hands of other people’s stuff.

I try to stay away from checking my cameras too often as no matter how hard you try, you’re bound to leave some human scent behind. With the cards that you can use in your cameras, they can take many photos, so I feel that checking them every two weeks is often enough.

Game/Trail cameras should be placed about belt lever or a little higher in order to get the best photos.

Scent is something you need to be careful with when putting out or checking your cameras, as the human scent is something deer associate with danger. I try to be scent cautious when handling my cameras, using scent elimination spray on my clothes and on my rubber boots, as well as wearing plastic gloves.

One thing I do to keep the deer from patterning me is to avoid checking the cameras at the same time of the day each time I go in to change cards.
Don’t leave a camera in one area to long, especially if you’re not getting much action; move them whenever there are very few photos taken. As if the deer aren’t there, they have to be using another trail or food source and by moving your cameras from time to time can really help you to pattern the deer before your hunt.

Whenever you have areas where several deer trail meet or crossing, this is one of the best places to hang your camera as you can catch the deer coming and going both ways. In addition, if there is one main food source the deer are using, place your cameras where they enter and leave as the camera can tell you what time they approached the area and when they headed back to their beds, giving you the exact time you want to be in your stand when they’re moving.

With the advancement in technology, you may not have to visit the cameras at all once you put them up, as several of the Game/Trail camera companies have wireless trail cameras, allowing you to check the camera photos right from your smart phone.

One of the things holding these cameras back is that they have to have a strong signal to operate successfully and many of the places we hunters spend time in is truly in the boondocks with poor or intermittent signal.

Some sort of Game/Trail cameras have been around for years, with the first ones operated with a string stretched across the deer trail and when the string was broken or moved, it gave researchers the time of the day that the deer went through.

One of the first companies to develop a two-piece device which projected an infrared beam out to a receiver, was Trailmaster which was the first active infrared device used in this area for research.

Shortly thereafter, infrared receiver and 35-millimeter cameras were wired together and once the infrared beam was broken, the camera would open up its shutter and take a picture.

Then a group from Texas, with a background in electrical engineering developed a single, self-contained unit operated by passive infrared sensors. They were equipped with a Kodak disc camera but they had troubles with false triggering and after further research and development, they launched the CamTrakker line.

Word spread like wildfire that these new devices had the ability to help hunters as well as in deer research.

Then in the late 80’s, Mark Cuddeback began marketing his Non-Typical DeerCam and now his Cuddeback cameras are one of the most respected units out there.

Then in the 80’s and 90’s, motion detection was added to the cameras, the problem with these cameras, was that they took too many photos of grass swaying in the photo or leaves blowing by.

Slow trigger times were also a problem with the first digital trail cameras, where the animal could walk in and out of the picture before the camera operated.

Each season, there are massive amounts of new technology put into Game/Trail cameras, with cameras becoming smaller and smaller, with different options and cost of many of these units becoming more affordable.

Perhaps there are a few deer hunters out there that haven’t invested in Game/Trail cameras or those that are still using the old school cameras, but once you have one or two, you’ll learn so much more about the deer in your hunting area, that you’ll wonder why you hadn’t used them before.

The newer cameras are easier to operate with more options, giving the hunter more time to hunt and less time in the field trying to figure the deer out.

Gary Howey, a 1968 Watertown graduate, now residing in Hartington, Neb. is a former tournament angler, fishing & hunting guide, an award winning writer, producer, photographer and broadcaster, a recent inductee into the “National Freshwater Fishing Hall of Fame” in 2017. Howey is also the Producer-Co-Host of the Outdoorsmen Adventures television series and Outdoor Adventures radio. If you are looking for more outdoor information, check out garyhoweysoutdoors.com, outdoorsmenadventures.com and like Gary Howey’s Facebook or watch his shows on www.MyOutdoorTV.com