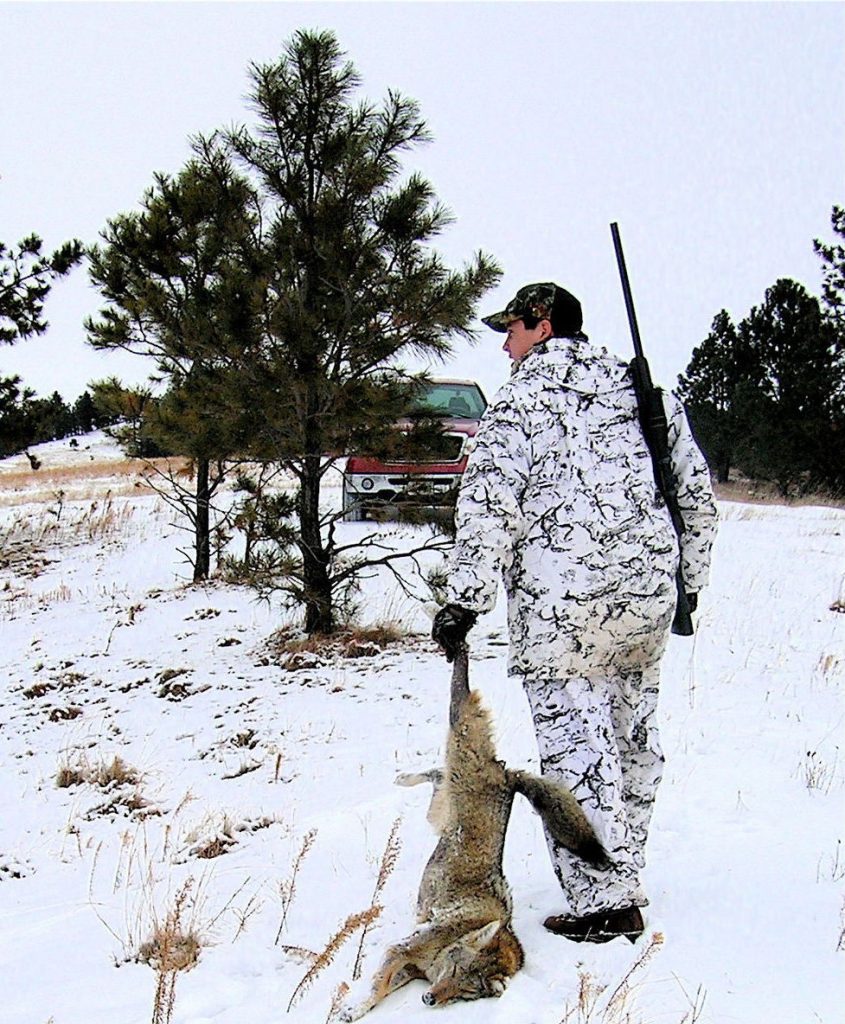 Over the years, my predator calling buddies, Larry Myhre, Bill Christensen, Simon Fuller, Ben Bearshield and I have spent hours calling predators in Nebraska, South Dakota and Iowa, and even had predators sneak in on us while hunting turkey in other states.

This column dedicated to all those times when the hunts went well as well as when they went wrong.

The decoy the predator is watching, so the critter has his eyes on it and not us, allowing us the opportunity to move to zero in on the incoming predators.

One of our hunts that started out badly for us, where Myhre and I met up with Team member Ben Bearshield on the Rosebud reservation in South Dakota to call predators.

It was mid-winter, and the hills on the reservation had some snow, where other areas were clear, on the hunt we decided to set up on a rise looking over an area with several valleys coming together.

Using the shade from the pine trees as a backdrop to camouflage us, we dug down through the snow to get to some solid ground.

I was on the left running the camera, Ben, the shooter sat in the middle, with Larry, the shooter on the right.

Ben started calling, softly at first as to not spook any predators nearby and increasing the volume after pausing to glass the valley below.

We had the ICOtec electronic decoy out 25 yards in front of us and the way it was moving around was sure to catch the eye of an animal coming in.
After calling about six times, I swear I heard the sound of something coming across the snow, thinking that it had to be in the valley below; I zoomed in with the camera, checking it to see where the sound came from.

I then glanced towards Ben to see if he heard it and as I did, off to Larry’s right sat a big coyote not more than five yards from him with his companion coming along the snow covered ground towards us.

Neither Ben nor Larry knew they were there and when critters are that close, I have a tendency to get excited and instead of filming getting some unbelievable footage, I blurted out, “Larry, look out there’s one setting right beside you.

By the time Larry pivoted, the one coyote was long gone while the other coyote made a mad dash across the field below us, with Ben getting a shot at it, which only sped it up.

To say Larry was a bit perturbed about me letting him know in such a loud fashion that the coyote was there and let me know it.

I knew I screwed up and all I could come up with was jokingly to say, “When I saw that coyote five yards from you looking and you my chubby hunting partner, while licking his lips, I had to let you know before it pounced on you.”

He didn’t buy it and to this day, whenever we head out to call coyote he just has to bring that up.

On another hunt, Larry and teamed up with a caller from Ainsworth who works with the Nebraska Game & Parks.

We’d set up above the Dismal River near Mullen, where the only cover were the trees along the river or the yucca on the hillside above the river.

I was stationed along with Larry facing west who was operating the camera with our other shooter who was doing the calling , above us and off to the left facing north towards the river.

We hadn’t been on the set more than fifteen minutes when the report of his rifle caught Larry and I by surprise.

We had no Idea as to what he shot at, but as he stood up and started walking towards the ridge above the river, we knew he wasn’t messing with us, getting to the ridge, picked up a bobcat that had snuck up from the river hoping to find an easy meal.

On another hunt with Team Member Ben Bearshield on the Rosebud, we called in five bobcats; unfortunately, that season had closed a week or two before we arrived.

Calling predators in northwest Iowa with Team Members Simon Fuller and Larry Myhre we had just set up and started calling when it sounded as a pack of coon hounds was coming our way As they got closer, several deer darted out into the opening straight out from us with two coon hounds in close pursuit.

They chased the deer down into a draw off to my right and then ever thing went quiet. Using my binoculars, I panned the open ground above the draw where I saw the two hounds face to face with a coyote, bringing up my rifle.

I could just verily see the coyote in my scope in between the trees and brush and had no shot.

Larry continued to call and about a half hour later, the two dogs started chasing from the south, thinking they would follow the same path as before, I kept my eyes on the open area between the draw and the southern tree line.

Off to my right, the sounds of Larry’s shot echoed across the valley. I hadn’t seen anything come across the opening so I slid over to where Larry and Simon were set up. 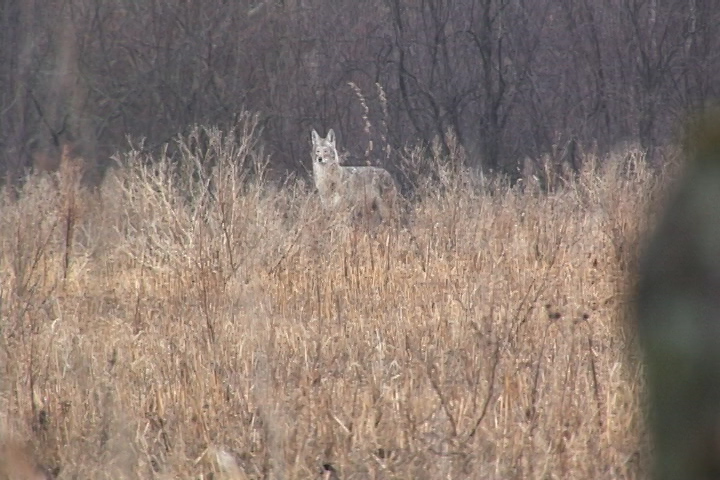 They both said in unison, “didn’t you see it; the coyote came out of the draw off to your right not 50 yards from you.”

Thinking that there was no animal on the ground and there was no way I’d miss seeing a coyote that close, but when you have a camera along, it’s tough to deny it when it’s on the film and there he was just off to my right.

I took a lot of ribbing over that, but the following morning I would have pay back as both Simon and I spotted a coyote coming down off the ridge as it zig zagged through the brush trying to locate Larry’s calls.

On that set up, Larry was oblivious of anything out in front of him and once the coyote entered washout, he popped up directly in front of Larry as Simon had caught it on film, so I had my pay back before this shoot was over.

Larry and I were set up on a ridge overlooking several hills, with open valleys in between. There was a coyote coming in from the west, it popped over the hill about 300 yards out and then just sat down looking in our direction. We tried howling, yelping wounded animal calls, but he wouldn’t move.

Then off to my left, I caught movement coming around the edge of the hill to our left, Larry was still intent on bringing in the coyote from the west, I whispered, “to the left” three times before he spotted the coyote and then a millisecond later he put the critter on the ground.

On one hunt, we spotted a big bobcat working through a prairie dog town and once we had an opportunity for the shot, Ben put it down with one shot, and it was the biggest Bobcat any of us had ever seen. 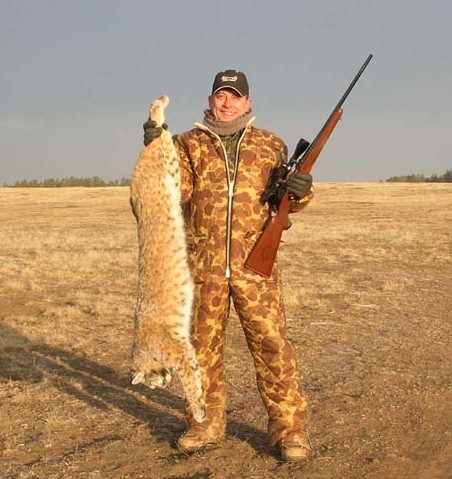 Back on the Rosebud, Bearshield, Myhre and I were set up overlooking a bottom when two bobcats appeared; they quickly ducked into a weedy draw, with all of us thinking we’d never see them again.

About twenty minutes later off to our right, we spotted something making its way slowly through the grass.

It was one of the cats that had came to our calls, it sat down and looked at us, but if we would have moved over to get a shot, it would have been gone in a flash. It sat there long enough for Myhre to get footage of it, while allowing me to shoot several photos. 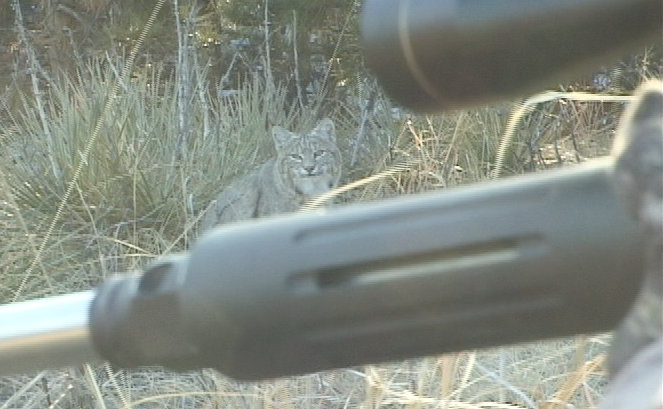 Team Member Bill Christensen, Larry Myhre and I were calling predators in Holt county Nebraska, when Larry spotted something coming in, it looked like a coyote, but wasn’t sure what it was but it was a predator, Once again, he dropped it as it came out of the draw.

It was a poor mangy coyote that didn’t have a hair on its body except on end of its ears, this was a mercy killing as putting that poor critter out of his misery was the best thing for it.

Team Member Ben, Larry and I were set up on a hillside overlooking a valley with a dam out in front of us about 150 yards.

Ben had just started calling, I was off to his right with my 22-250 with Larry handling the camera to my right.

Ben said, “Wait until they get a little closer” with me thinking they got closer, they’d be in our laps.

Just then, one of the coyotes came up between Larry and me and came to a screeching halt, flipped over backwards, running over the top of the trailing coyote, with both beating feet back in the direction from which they came.

Once again, Christensen, Myhre and I were set up amongst some cedar in western Knox County, Larry using our mouth calls as well as our ICOtec electronic caller faced the west while Christensen set up off to Myhre’s left, and I was off to Myhre’s right.

As the calls echoed through the quarter, out of the draw to my left, behind Larry, a huge coyote trotted out about ten yards from Bill and I, it stopped with both Bill and I trying to locate placement for a shot through our high power scopes.

Before either one of us could get a shot off, it quickly winded us and dropped back down into the draw.

This was a good lesson for us as after that one of us was always carrying a shotgun with coyote loads when we go out to call for that close up shots.

When it comes to calling predators, you may set there for twenty minutes or so and not see a thing, and on the next set, just set down and you have coyotes coming towards you, you just never know.

Calling predators is an exciting off-season hunt, with most landowners, especially those with cattle happy to let you on their land to get rid of those critters that hang around their calving yards during birthing.

Gary Howey, Hartington, Neb. a former tournament angler, fishing & hunting guide an award winning writer, producer, and broadcaster and recently inducted into the “National Freshwater Fishing Hall of Fame” in 2017. He is the Producer-Co-Host of the Outdoorsmen Adventures television series and Outdoor Adventures radio. If you are looking for more outdoor information, check out garyhoweysoutdoors.com, outdoorsmenadventures.com and like Gary Howey’s Facebook or watch his shows on www.MyOutdoorTV.com.