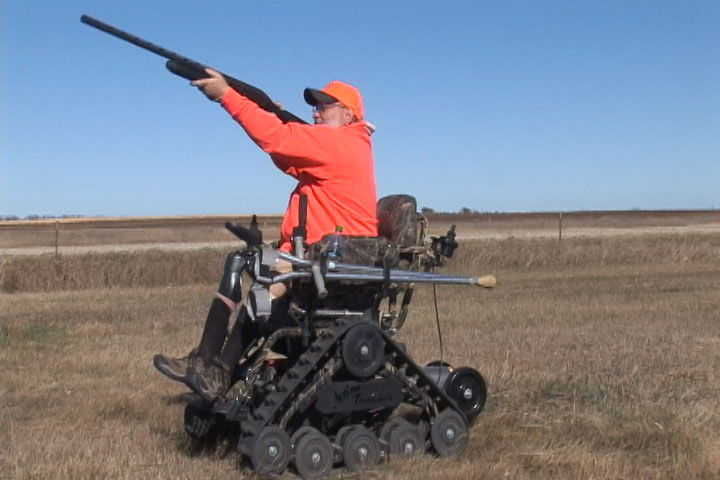 Its fall, the time of the years when trees, shrubs and grasses change from their summer colors to their beautiful fall coloration.

The orange, yellows and reds are not the only colors appearing in the fields in October, as you will see rows of hunters orange color as thousands of hunters, hit the field for the South Dakota pheasant season.

It was the second week of the season as wildlife artist Mark Anderson, Sioux Falls, South Dakota and I made our way north up Highway 281 heading for Aberdeen, up into Brown County, the home of excellent habitat and good bird numbers.

Good friend Casey Weismantel, Aberdeen C.V.B. had invited us to take part in a veteran’s hunt held out of the Half Cocked Lodge on Mina Lake west of Aberdeen.

It was close to noon, as we loaded up and making our way out to the fields to begin our hunt; with our group opening our season in one of the many unpicked cornfields in the area.

As the veterans debarked the bus, team leader Dave Usselman went over the game plan as to how best to hunt the field. 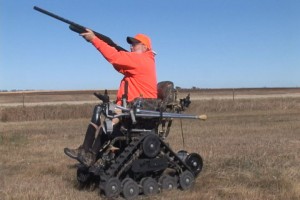 Our wingmen, those on the outside, would be set up, twenty-five yards out in front of the walkers working along the edge of both sides of the corn with walkers moving through in the corn, with other veteran’s blocking at the end of the field.

Fifty yards into the corn, the dog off to my right begin to get birdy, his nose close to the ground with its tail going in tight circles as he closed in on a bird. With a loud cackle, the first bird erupted from the outer edge of the corn directly in front of trailing dog.

Several shots later, the bird came crashing down, with another dog was hot on its trail, retrieving the first bird of the hunt.
In the wide rows in front of us, other birds were on the run, some tried to slide out in front of the walkers, only to be pushed back into the corn by the wingmen. As we approached the end of the first field, shots rang out as our blockers did their best to get in front of the hard flying roosters.

Approaching the end of the field, the walkers slowed, stopping from time to time, allowing the dogs to root out those birds, hiding in the cover.

On both sides of the corn and at the end, the dogs were putting birds into the air with shotgun blasts erupting along the entire line, with a few birds escaping, flying off into other fields.

The north group was hunting similar fields as the first group, unpicked corn with grass fields along either side.
Our second group of hunters, were set up in similar way, the only difference was this group would have a drone filming overhead, with the operator with the blockers, guiding the drone via his I Phone, giving the operator a bird’s eye view of the action.

In the middle of the field, as the walkers approached, several birds, both roosters and hens blew out of the cover, as the rooster pumped hard, gaining altitude, flying high over the outside wingman. The hunter shouldered his twelve gauge, swung past the bird, and fired, putting the bird down.

The dogs working those birds out in front, will methodically work the last part of the field with the walkers holding, keeping the birds from cutting back into the corn.

One of the hunters a double amputee was in a tracked wheel chair on the right side, he approached the end of the field, prepared for what he knew would soon happen.

This is when it happens, with birds erupting from the cover, when you will hear the cries of the hunters yelling “rooster”, with birds coming up between the walkers and blockers, at times it is pure pandemonium with birds going in every direction as the hunters do their best to draw a bead on the brightly colored fast flying birds.

It was the end of a successful hunt where those who were once served as brothers in arms, now had the opportunity to spend quality time in the outdoors, enjoying time with each other in the field in South Dakota sharing a South Dakota tradition, pheasant hunting.

Hunts like these are an opportunity to honor those, which have served; with opportunities, they may have never been able to take part in if it were not for sponsors and groups such as the Wounded Warrior Guide Service.

Wounded Warriors’ Guide Service is a guide service founded in 2009 by veterans for veterans, providing cost free hunting opportunities for vets wounded while serving our country. More information on the Wounded Warrior Guide Service can be found at www.woundedwarriorsguide.com