Walleyes throughout the Season By Gary Howey

Open water anglers have been not so patiently waiting for the ice to come off the Missouri River reservoirs, and once it does, a mass migration towards the river begins as vehicles pulling boats head out to take advantage of the “Pre-Spawn” bite and the first open water.

The bite prior to pre-spawn on the reservoirs was slow as the fish were in their, “neither moving, nor eating much” winter mode.

Those who ventured out onto the ice of the reservoirs caught some good fish, using small jigs, jigging spoons and live bait rigs suspended just off the bottom all tipped with minnows.

With the fall of the water temperatures, these fish moved into deeper water where both the males and females prepared for the spawn with the females finishing the development of their egg sacks.

As the daytime temperatures warmed the water, with longer days and more sunlight, the ice started to disappear the walleyes begin to become more active and to feed more.

Walleye and sauger in our lakes and reservoirs moved up from the deeper water, into water adjacent to their spawning areas. During pre-spawn, fish feed very little, while they hold off the points and gravel bars, waiting for the spawning conditions to be right.

This time, there will be some fish will bite, but one needs a ton of patience to catch these fish as we found out two weeks ago on a  walleye fishing excursion to Lake Francis Case.

Water temperatures were just above freezing at thirty-four degrees, with a slight breeze that came and went, as the wind died, the little open water we had went glass smooth, the fish became inactive and the bite died.

The fish we caught were big, we caught them slowly jigging quarter ounce or smaller jigs tipped with larger minnows and live bait rigs worked along the bottom.

We marked numerous fish on the points and gravel bars, loosing several we hooked when they threw the hook before we could get them to the boat.

It was a tough bite as the four of us took seven big walleyes in a long day of fishing, not setting the world on fire, but giving us the opportunity to get on the water to escape those cabin fever blues.

Walleyes living in the reservoirs, fed heavily in the late fall and as water temperatures declined, moved into deeper water where they conserved energy in preparation of the spawn.

The fish in the rivers, migrated in the late fall, until their migration became blocked by the dams, stacking them up below the dams on Lake Oahe, Lake Sharpe, Lake Francis Case and Lewis & Clark. 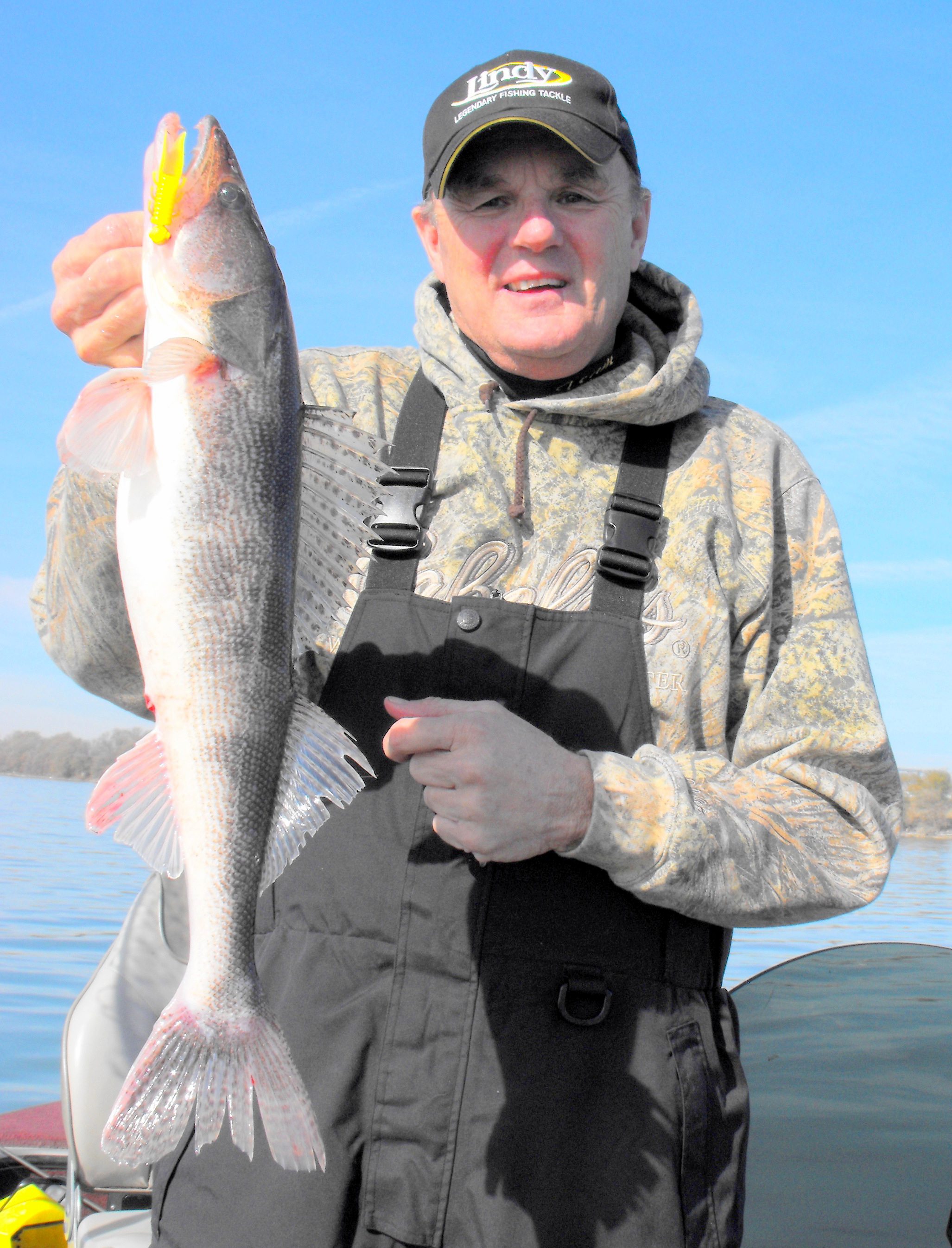 Author with one of the pre-spawn sauger his Team took using jigs while fishing the early season on Lake Francis Case. (Outdoorsmen Adventures Photo)

Once they moved into the “Spawn”, do not believe that all walleyes and sauger spawn at the same time, as studies have shown that some fish in lakes and rivers of the upper Midwest may spawn as early April and as late into May.

The water temperatures, in each area may vary a lot and is one of the main factors leading into the spawn that affects when the spawn occurs

The walleye and sauger in our part of the county spawn as water temperature reach in the range between forty to forty-eight degrees.

The fish move up onto the windswept rock, gravel and rubble points and shorelines where the spawning occurs. The spawning occurs at different depths that can range anywhere from two on out to nineteen or twenty feet.

Windswept points with their wave action aerate the walleye egg and prevent silt from building up and covering them.

When conditions are right for the spawn, females move up onto the spawning grounds with the males in hot pursuit and as the female deposits, her eggs the males are there to fertilize them. Once deposited, the fertilized eggs on their own with both the male and female moving back onto deeper water to recuperate from the spawn.

If the female does not find ideal conditions for the eggs to hatch, she absorbs the eggs and skip that years spawn.

During the spawn, fishing will start to pick up once the walleye and sauger have recuperated from the spawn, where they will begin to feed in order to gain back the weight they lost while spawning.

Until water temperatures rise, the fish continue in their slow mode, moving a bit more, looking for food.  As with other times of the season, go to jigs and live bait rigs, as they will produce throughout the year.

This is the time of the year that anglers try different baits, hoping to trip the trigger of the hungry walleyes.

Some fish will chase, as water temperatures start to rise, warming their cold-blooded bodies where you can use, cast or pull crankbaits to look for those aggressive fish.

Once the spawn ends, with “Post-Spawn” beginning, the fish will move in and out of the shallow water, mostly during low light periods, morning and evening.  They can be caught throwing small bodied crankbaits that imitate smaller baitfish as well as the old standby, jigs and live bait rigs tipped with minnows or plastics such as Berkley Gulp”. The baits used during Post spawn, when water temperatures are on the rise is when anglers’ fish more aggressively as the fish are starting to move and feed more.

As spring turns summer, you do not want to get stuck in the same old routine where you fish with baits that once caught fish for you, as it may have worked then, but it may have been a different time of year when the fish were in a different mood. If you do this, it could mean you could spend a lot more time fishing with a lot less catching.

Summer is when you start trying this bait and that, switching baits, finding out what bait the fish want, give jigging a good try. If that doesn’t work and you know you are on active fish, try changing color, the way you jig and if the fish don’t turn on try another bait, a different speed or method as summer is when the fish area actively feed.

Summer is the time of the year when using crankbaits helps to locate active fish while giving you a method to cover more water.

Once you locate the active fish, you may want to work over them with a spinner rig and a worm, leech or minnow, to sit on top of then with a jig and live bait rig to catch those active feeding fish.

Once the bite slows and dies, and you have not caught a limit, go back to searching for active fish, as summer is too short to die on a spot that you caught fish back in the good ole days.

The end of summer arrives way to quickly, so, spend as much time on the water, learning the water, where the fish hang out and what they want in each season.

Also, give someone else an opportunity to go fishing take a kid or someone who has never fished out as it brings someone new into the sport and both yours as well as their trip into the outdoors and the fishing this summer will be much more enjoyable and rewarding.

gary Howey,, Hartington, Neb., originally from Watertown, S.D. is a former tournament angler, fishing & hunting guide and was inducted into the National Freshwater Fishing Hall of Fame in 2017.   He is the Producer/Co-Host of the Outdoorsmen Adventures television series and inducted into the Freshwater Fishing Hall of Fame in 2017. If you are looking for more outdoor information, check out www.outdoorsmenadventures.com, like Gary Howey’s Outdoorsmen Adventures on Facebook or watch his shows on www.MyOutdoorTV.com.

Author with one of the pre-spawn walleyes his Team took using jigs while fishing the early season on Lake Francis Case.  (Outdoorsmen Adventures Photo)