For those anglers in northeastern South Dakota and other parts of the state who have been anxiously waiting for the waters of the Missouri River reservoirs; Lake Oahe, Lake Sharpe, Lake Francis Case and Lewis & Clark to open up, it will not be long.

As we recently found out on a trip to one of the Missouri River impoundments as the parts of the lakes, the bays and some of the shoreline waters are now fishable.

As I looked out across the open water onto the ice covering the biggest part of Lake Francis Case, I wondered if perhaps we might have jumped the gun on this our first open water fishing trip on the lake.

Last year about this time, early April, it had been short sleeve shirt weather, with unbelievable early open water fishing.

Not this year as the temperatures were in the mid thirties, with everyone in the boat layered in cold weather gear as the warm part of the day would be in the low forties with wind.

Arriving the afternoon before at the Missouri Valley Lodge, we went over the game plan, which included; weather, wind, fishing method, depth of the fish, breakfast meal, departure time and what location we would be launching from.

There were bays on the lake that were open with some open water running out into the lake along the shoreline. Several of the areas we would be fishing still had a light covering of ice extending out into the main lake. In the spring, as the wind picks up, the light ice will break away from the main ice pack, drifting into the shoreline, covering the water where Joel had located active fish earlier.

This was no problem as the wakes from the boats three-hundred fifty horse Yamaha motor broke it up, allowing Joel to work through the ice as he searched for active fish.

The following morning, Joel was on the water before daybreak checking to see if any of the ice had closed off our launching site and to check out the areas that were holding fish.

We were to head out after one of the Lodge’s filling breakfasts and wait for his call letting us know what boat dock he would be ar.

Shortly after he was the water while searching for active fish, he landed four good fish from several open water spots holding a good numbers of fish.

Once we boarded, the plan was to work these areas, with jigs and larger minnows, hoping to temp the walleyes to take our baits.

All of the four huge GPS/Locators all showed fish with Joel using his bow mount trolling motor worked from the shallower twenty four foot of water on out to fifty foot of water, looking for active fish.

We had several bites or pickups where the fish simply mouthed the bait, allowing us to lift them a foot before they lost interest and let go. 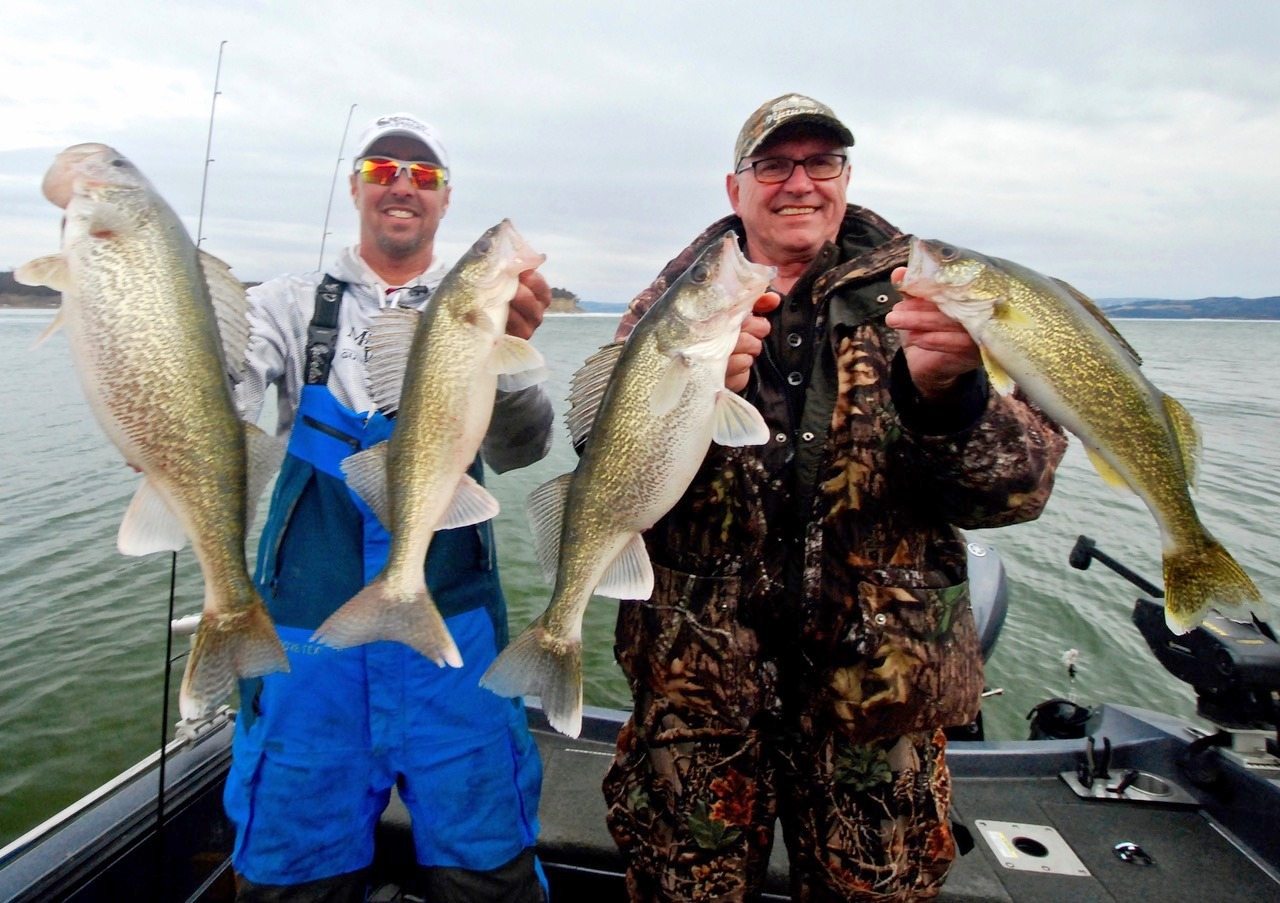 Joel worked several points, all of which were showing fish, tight to the bottom, not active fish, yet we hoped that our offerings would trigger them to feed as through the long cold winter the fish had been in their cold blooded period where they had not fed much.

As Joel maneuvered the boat along the point, there was added weight on my line, dropping back the bait, hoping the fish would take it in and after a few seconds, I set the hook.  The weight of the fish was there, but a slit second later nothing, as the fish took my minnow without getting the hook.  Because of this, I switching my main rod to the other I brought along, with a jig that had a stinger hook.

Joel had the same thing happen, as the fish were not attacking the bait, they were just gumming it and when they felt additional weight, would release or spit out the bait.

I switched rods, going with the stinger rig, but came up short as I and the other anglers in the boat were striking out.

It was time for a change as both Larry and I grabbed our tackle bags, looking for the perfect bait something that would wake these fish up.

Larry went with one of his numerous hand tied jigs while I tried a floating live bait rig, thinking that the walking sinker dragging along the bottom may get the fish’s attention and as the floating rig with the minnow floated along  above them, they would move up to take it.

What they say, “the best laid plans” well, we must not have planned well as we both struck out, with Larry going back to a light jig, while I dug through my bag once again, deciding on a heavier sliding sinker, longer snell with a red hook tipped with a minnow, working it the same manner as a jig.

Coming out of deeper water, making the turn, my line went slack, coming in under the boat as it drug along the bottom up into shallower water. As I brought the rod up, I felt the fish, and as I set the hook, feeling the walleye’s head shake on the end of my rod.

Working the fish out of the deeper water, Joel, with net in hand, indicated it was a good fish as he slid the net under the two-pound walleye.

Throughout the early afternoon, the bite was slow, with the crew would continuing to hang in there, hoping the bite would pick up.

Larry and I would disembark the boat, headed for Geddes to do an interview, and would be off the boat for about an hour. We headed back to the Lodge to do the interview with good friend Buddy Steiner of www.fishstories.org.  Buddy from Pierre, S.D. had asked Larry and I do an interview for his web site and his fishing archives. It was great to spend some time with Buddy and to archive some of Larry and my experiences, heard on the fishstories.org web site and its podcast.

We called, letting Joel know we were on our way, loaded into Joel’s Lund and the three-fifty Yamaha made short order of getting back to the point that showed signs of active fish.

While we were away, Joel landed another big walleye, but it was slim pickings as the fish were inactive as the water temperature was just thirty-four degrees.

It was a great day on the water, even though it was colder as we spent time with good friends, caught some big fish, stayed in the unbelievable Missouri River Lodge in Geddes, S.D., fishing with one of the finest guides on the water, Joel and his Missouri River Guide Service.

← Prev: Creating Wild Turkey hangouts Next: Walleyes throughout the Season By Gary Howey →