DRAYTON, N.D. | I stood there braced in Brad Durick’s G3 riverboat trying to muscle in yet another Red River catfish. Durick stood poised with the landing net on my brother, Dean’s side of the boat. This scenario had been playing out over the past two hours. I couldn’t help but think: “If you are a cat fisherman, you don’t have to die to find catfish heaven. Hit the Red when it’s right and catfish heaven is right here.”

Dean grunted as he heaved back on the 7-and-a-half-foot Rippin Lips catfish rod pulling the 20-pound channel cat to the surface where Durick, with a practiced dip of the net, enveloped the husky cat in the mesh where it continued to thrash and lunge all the way into the boat.

There is no quit in these fish.

It was nowhere near net time for my fish so Durick slipped the 8/0 circle hook from the corner of the cat’s mouth and slipped him back into the silt-laden currents of this magnificent catfish river.

My rod was bowed clear down into the handle, and I marveled at how any rod could take this kind of punishment day after day. You can put a lot of pressure on a fish with 30-pound-test monofilament, and we were. The butt of the rod was jammed into my hip, and I had to move it a bit because it was beginning to hurt. I surmised there would be bruises there before this was done. And there were.

This all began about a week earlier, when Durick, a catfish guide headquartered in Grand Forks, N.D., told me, “We put about 500 pounds of cats in the boat in five hours yesterday. You need to come up.”

All it took was a call to Dean at his farm home near Worthing, S.D., and he was on board. A day later, Brad said, “We put 63 in the boat today.”

I had fished the Red before. I can’t even tell you how many times beginning in the late 1980s at the Mecca of all channel catfishing, which is below the dam at Lockport, Manitoba, just a few miles north of Winnipeg. On our 35th wedding anniversary, Fran and I spent a day there catching 44 fish in four hours.

Brad, who is the veteran of several trips to Lockport, said he could beat that here. Today.

“This is a fantastic pre-spawn bite,” he said. “I have not seen anything like it since the spring of 2012.” 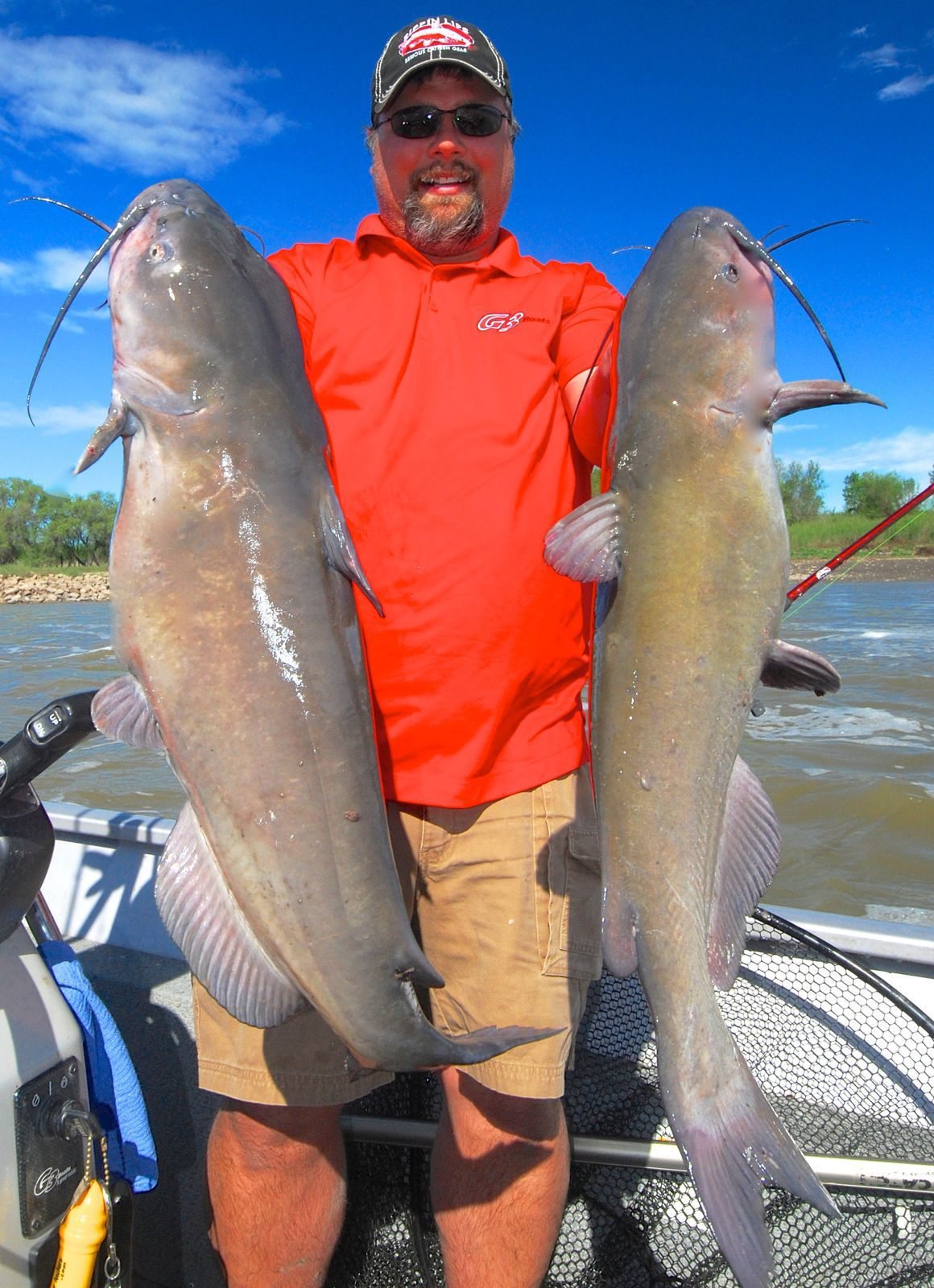 That was a low-water year, much like this year, and you have to wonder if that is the key.

“Once the spawn begins, it will slow up,” he said. “We really need to enjoy this unique bite right now.”

Gary Howey, Hartington, Neb., and I fished a day with Brad about this time last year on our way back from a Canadian fly-in. Due to heavy rains, the river had risen 13 feet. We still managed to catch about a dozen fish with the biggest topping out at 15 pounds.

That year we fished in the Grand Forks area, but now we were at Drayton.

And right now, this is the place to be.

Brad’s prediction of beating my Lockport record came true. And then some. In two-and-a-half hours we had 43 fish in the boat. That number jumped to 65 in four hours.

I was ready to call it a day, but Brad still had bait left. He carved up another white sucker and we moved the boat to a new hole. We ran out of bait at 79 fish. Time: five hours and 10 minutes.

“You’re not going to use these statistics in your column, are you?” Brad asked. “No one will believe you.”

“Maybe,” I answered. “But I know this. If you fish often enough on some of the best fisheries in the country, you will, from time to time, run into a bite which is just phenomenal. Often, when you look back you question yourself on whether it really did happen. But it did.”

Back in the days when I was teaching fishing classes and giving fishing seminars, I used to say, “I know the secret to successful fishing. Only go when the fish are biting.”

Simplistic, but so true. This is how it was on the Red when we were there. It won’t last.

Brad told me a typical day-long trip will usually produce about a dozen catfish. Some days may yield as many as 20 to 25 cats, but that is a heck of a day.

Durick, who is a U.S. Coast Guard licensed captain, has been guiding on the Red for nine years. Contact him by phone at: (701) 739-5808 or email at: braddurick@gmail.com.

He offers eight-hour trips as well as a six-hour package and even a four-hour twilight trip. Check out his web site at: www.redrivercatfish.com for other trip opportunities and details.

He supplies rods, reels, tackle and bait. Customers should bring food, beverages, rain gear, fishing license and cameras. His rule is all catfish over 24 inches must be released unless it is a state record. He does not provide fish cleaning services.

In addition to his guiding series, Brad is also a nationally recognized fishing educator and outdoor writer. He is the author of two self-published books, “Cracking the Channel Catfish Code” and “Advanced Catfishing Made Easy.”

On the hour-long ride back to Grand Forks, I reflected on a tagging study being done since 2012 on the Canadian portion of the Red. The University of Nebraska, in cooperation with Manitoba fisheries, has been tagging catfish from below the dam at Lockport to the Manitoba border.

Somewhere around 11,000 fish have been tagged.

Among the first, if not the first, to catch a tagged fish at Grand Forks was Durick in 2015. His fish had been tagged at the Lockport Dam in 2013. That’s 300 river miles. Since then he has boated several more, many from the Lockport Dam area and beyond.

It would seem that catfish in the Red are a lot more migratory than originally thought. There is a lot remaining to learn about this unique fishery.

But for right now, it’s enough for me to know that this is among the best places in the world to catch channel catfish in the 10- to 20-pound range.

← Prev: MOTV For the Best Outdoor Shows On the Planet Next: How Deep Should My Food Plot Seed be Planted? →