It was well into what I call the “happy hour” of ice fishing. The sun was falling rapidly behind the hills to the west of the small farm pond upon which I had set up my Fish Trap shelter.

My depth finder suddenly lit up with the arrival of a big school of crappies. I tried to hold my jigging rod steady so the horizontal jig tipped with a minnow head would entice one of those fish that had encircled my lure.

A coyote suddenly howled on the hillside to my right, surely not more than a hundred yards away, and I flinched at the sound, jerking the rod. I felt the satisfying pressure of a good fish.

“I’d rather be lucky than good,” I mumbled to myself and soon pulled a nice pound crappie onto the ice.

I dropped him into the plastic bucket sitting alongside my small heater and sent the jig back down on a mission.

Forty-five minutes later, the sun was long gone, and nine nice crappies, all about the same size, were flopping in the bucket. I folded back the Fish Trap, put my power auger, bucket and heater into it, and began pulling it behind me on the way to the truck a couple hundred yards away.

I love catching crappies through the ice, and farm ponds are one of my favorite places to do it.

Most farm ponds do not contain crappies because the Iowa Department of Natural Resources (DNR) does not stock them. Crappies compete directly with largemouth bass, so the DNR feels it is better not to introduce them.

However, crappies have found their way into a lot of farm ponds in both Iowa and Nebraska.

Crappies tend to cycle so there is always a dominate year class in these ponds. If you keep track of them you can concentrate on the ponds with the biggest fish.

The best crappie ponds that I know of have a lot of submerged timber in them. Crappies like to school alongside something, and wood seems to be their favorite. The best fishing is usually in the upper end of these ponds where the flooded timber is. You need to be careful in these areas, however, because most ponds are littered with underwater springs, especially in the shallow end, and this can mean thin ice.

If there is snow on the ice you will not be able to see the thin spots and about all you can do is drill test holes. A few years ago I was venturing out onto a pond and my test hole drilling showed a good, solid six inches of ice. As I advanced I suddenly stopped. Something didn’t feel right. I drilled a test hole and found I was standing on about one inch of ice. One more step and I would have taken a swim.

While you can catch crappies all day long, the action really heats up during “happy hour,” that one hour of daylight just before sunset. Crappies seem to come up higher in the water column and begin feeding. 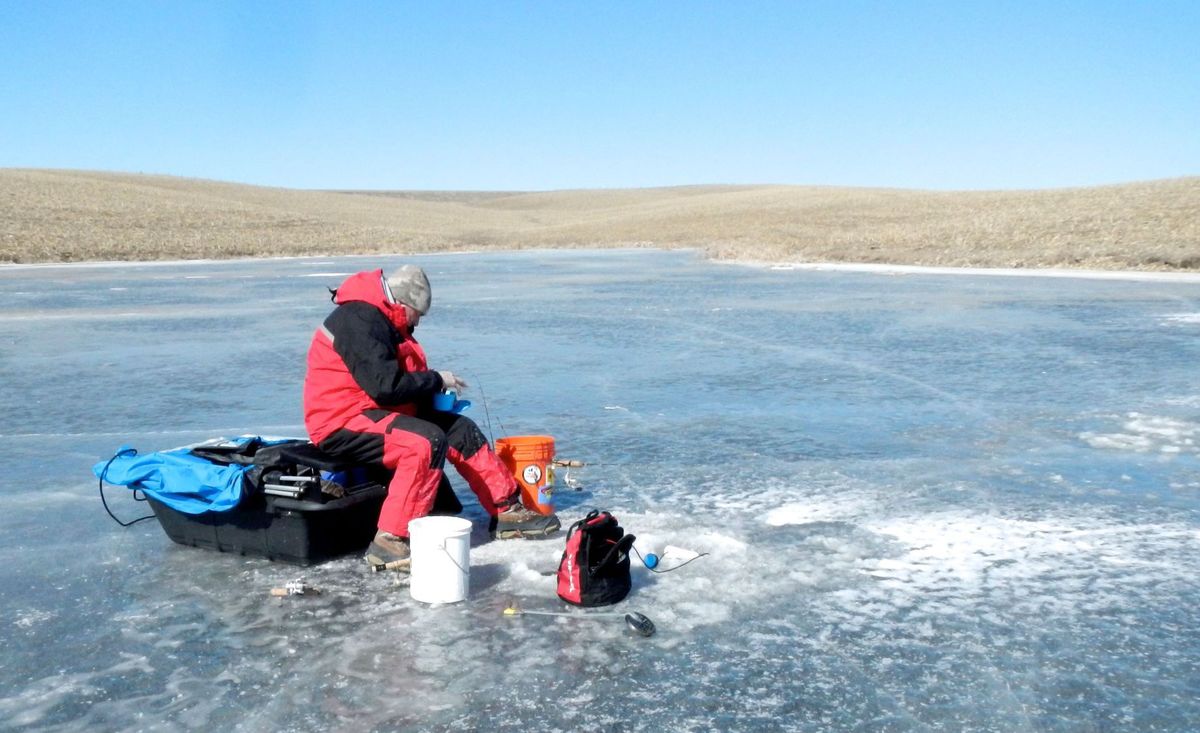 Many farm ponds in Iowa and Nebrask contain crappies. Oftentimes you will find Bluegill mixed in with them, which is the case on this pond in northeast Nebraska (Larry Myhre Photo)

When fish are active I use the heavier jigs, but if things are slow I may go way down to the 1/64-ounce.

While minnows, very small minnows, come to mind as the best bait for crappies, I have caught a lot of farm pond fish on waxworms. I think it pays to carry both.

More outdoors, information can be found at http://siouxcityjournal.com/sports/recreation/outdoors