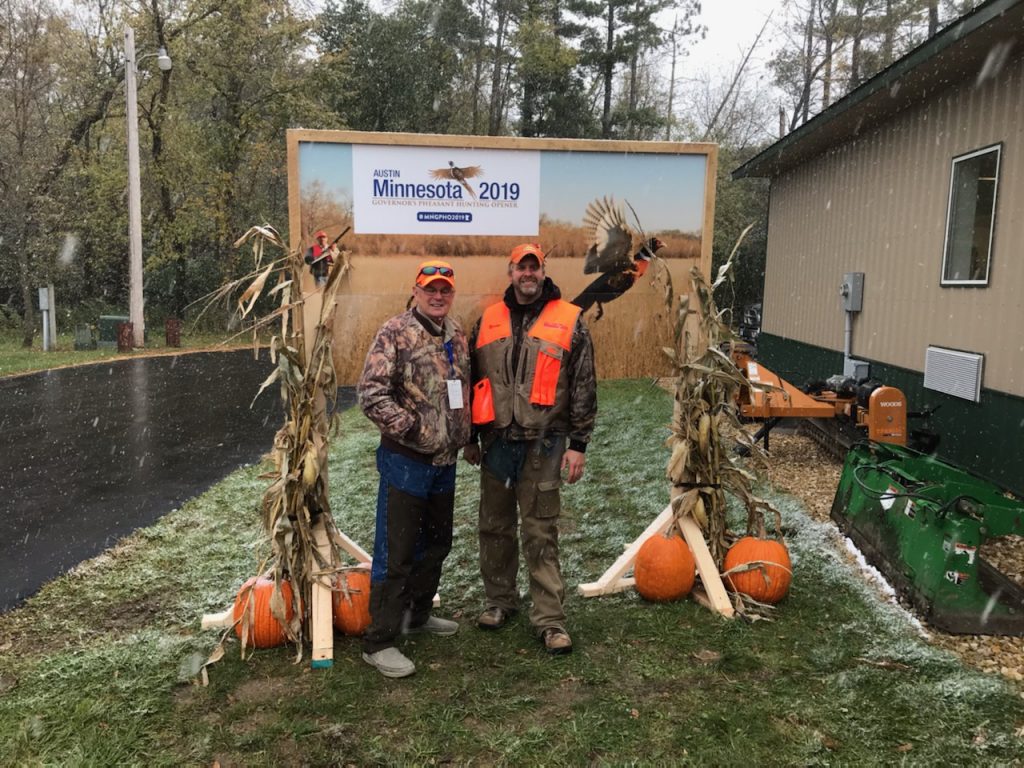 As we approached, the James Sathre tract of land located just outside of Austin, Minnesota my hunter guide Neil Goergen, his young dog Ranger and I looked the ground over.

It appeared to be perfect pheasant habitat, numerous acres, excellent habitat, a creek running through it, along with a large shelterbelt running along the south and west end of the property.

As in most states during October in the Midwest, many of the cornfields in Minnesota were unharvested, giving the birds the definite advantage.

Hunting with us would be Boomer Stelmach, his daughter, Sophia, who wouldn’t be hunting, but was going to walk with us, along with their dog Luma, as we attempted to push the birds in front of us and into the air.

Austin, Minnesota, located in southeastern part of the state, with its wildlife Walk-In Access Habitat areas, CRP Tracts and the home of the Spam Museum. This year in October, is also the home of Governor Tim Walsh’s first annual Minnesota Pheasant Opener.

With the recent resurgence in the pheasant population in the Austin area, it was the perfect time, during the Governor’s Pheasant Opener to highlight its hunting resources.

The Austin area is rich in outdoor heritage with its Cedar River State Water Trail, grasslands, state parks and nearby state recreational trails.

The community also has 13 miles of paved bike trails in town and the over 500-acre Jay C. Hormel Nature Center consisting of restored prairie grasslands, woodlands and a new interactive interpretive center.

I had the privilege last year to hunt with then Senator Tim Walsh, who proved to be an excellent shot and he had had ties to Nebraska as he’d grown up in West Point, Nebraska and attended college at Chadron State College.

He told me that not only was he originally from Nebraska, but also had family relatives that lived in Hartington.

His cousins Jay & Ann Walz had lived in Hartington until Jay retired from Radec Construction, they return to Hartington each summer from Arizona, their daughter Carla Schmidt, who works for Cedar County.

As we traveled through Minnesota filming the Outdoorsmen Adventures television series, I couldn’t help but notice the Minnesota Walk-In land, along with the Pheasants Forever habitat public access land throughout the state.

Not only are these tracts of habitat good for wildlife, they also help to improve water quality as they affect water quality, keeping the soil on the land.

This year as in years past, there would be another dedication of a Wildlife Management Area from the Worlein family, just outside of Austin.

Governor Walz, indicated, “This habitat dedication, the designation of 141 acres of land as a Wildlife Management Area donated by the Worlein family would not be possible without communities such as Austin, the Austin Area Foundation, the Minnesota Department of Natural Resources and the Mower County Pheasants Forever.”

The dedicated land is outlined by Murphy Creek on its north and east boundaries with the restoration of 81 acres, known as the upland prairie, began in May of this year, with the planting of round-up ready soybeans. The remaining 60 acres is planned for a 2020 planting.

The local Mower County pheasants Forever is very active, they along with their partners, the Minnesota DNR, the Soil and Water Conservation District, the National Wild Turkey Federation and others that to date the chapter has invested $2 million into habitat restoration, which includes 600 acres of farmland that has been restored to native habitat.

It was a full house at the Friday including a tremendous meal, where we met with our hunter guides and team members to figure out a game plan for the following morning.

Several of the dignitaries attending the event had an opportunity to welcome the hunters and talk about all that Austin had to offer, not only to hunters but also to visitors.

Governor Tim Walz and Lt. Governor Peggy Flanagan as well as several other Minnesota dignitaries took the opportunity to praise this part of the state and how their and other Department of Minnesota worked together to provide these excellent hunting opportunities.

The following morning after a filling breakfast, we made our way out to the CRP field we’d be hunting and at the nine o’clock hour, when Minnesota’s pheasant season opens, our group and the two dogs worked our way into the field. It was thick cover, perfect pheasant habitat and in order to cover more of the huge tract, I used the zigzag method, trying to cover as much terrain as possible, moving back and forth across the field.

Working towards the end of the field, where the corn lay up close to the CRP, one of the dogs went into the outside rows, kicking up a hen.

There were birds in the field, as there were several roosters and hens, which burst from the cover well out of shotgun range.

Our group didn’t tag any birds, but the group tagged over forty-five roosters, and by the size of their spurs were older birds.

Each year, in Minnesota, the habitat increases especially in the southeastern part of the state and with the increase in habitat, pheasant numbers are rising and I’m looking forward to the 2020 Minnesota Governor’s hunt.

← Prev: Invasion Could destroy our Fisheries Next: Being Comfortable, Staying Warm & Dry →