Invasion Could destroy our Fisheries 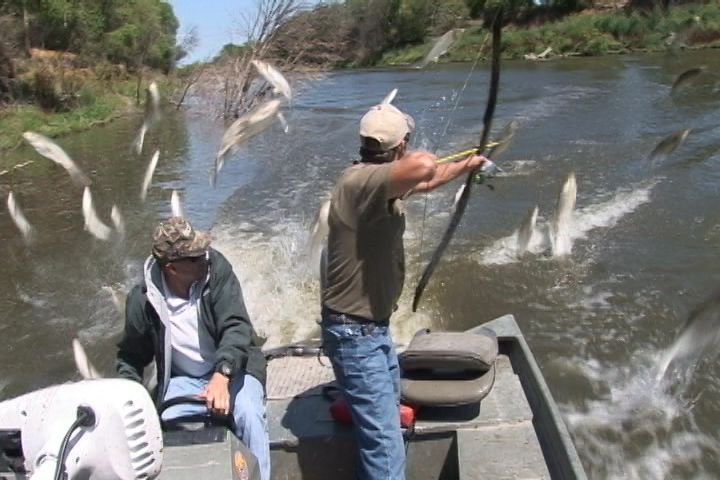 Our nation’s waters are under attack by an invasive species, Asian carp, and if we don’t do something quickly to stop or eliminate them, the consequence we’ll face could be the destruction of our fisheries.

I’ve had some run-ins with Asian (Silver) carp, on the Jim and Sioux Rivers a few years back, where then I thought it was a problem.  Our run-ins with them were nothing compared to the video Koby Sudbeck, Hartington, Nebraska posted on his and the “Yankton Buzz” Facebook pages where hundreds if not thousands of Silver carp went airborne as he maneuvered his boat through a small shoot off the Missouri River.

Recently at the Association of Great Lakes Outdoor Writers conference in Lacrosse, Wisconsin, I had the opportunity to talk with National Wildlife Federation- Drew Youngedyke, with the National Wildlife Federation whose the communications coordinator for the Great Lakes Regional Center on what’s going on in his area, of the Mississippi River to prevent these fish from getting into the Great Lakes.

According to Youngedyke, “They’re four species of the Asian carp that invaded our American waters, the Grass, Bighead, Silver and the Black carp.”

“All but the Black carp now have made their way upriver as far as North Dakota, South Dakota, Minnesota and Ohio.”

Youngedyke indicated that “today, they swim in the waters from Louisiana to Minnesota and from Tennessee to North Dakota.”

The first Asian carp, the Grass and Silver came to the United States in the 60’s and 70’s brought here by the U.S. Fish & Wildlife Service and southern fish farmers to control nuisance algal blooms in wastewater treatment plants and aquaculture ponds as well as for human food.

It didn’t take them long to escape, just ten years and spread to the waters of the Mississippi River basin and other large rivers like the Missouri and Illinois.

Drew indicated, “Grass carp can alter the environment by altering the communities of plants which affects the waterfowl, invertebrates, and fish.   They feed on submerged vegetation and can quickly destroy waterfowl habitat.”

The Silver and Big Head carp feed continually, swimming through the water with their huge mouths agape, are filter feeders, removing plankton, from the water, which is the food base for fish in our waters, the young gamefish, native mussels as well as the Paddlefish.

The Black carp, we haven’t had to deal with yet. These fish, that primarily feed on mussels and snails and at times feeding along the bottom of rivers and lakes.

There are more than 6,500 of these harmful, non-native (invasive) species causing more than 100 billion dollars in damage each year to our U.S. economy.

If not controlled it’s not only the fisheries that are in danger as the Silver carp go airborne from the least little disturbance and can injure kayakers, boaters, wake boarders, skiers as well as others.

Potential control methods include the use of fish poisons, physical barriers, physical removal, habitat alteration, or the addition of predators, parasites, or pathogens.

The DNR awards a contract annually for Invasive carp commercial fishing. Commercial anglers on the Minnesota or Wisconsin boundary waters of the Mississippi River have specialized equipment and the knowledge of the locations where these fish congregate, with the DNR directing the commercial anglers as to which bodies of water to commercially net.

Because Asian carp became such a problem in Kentucky, Senator Majority Leader Mitch McConnell (R-KY) and the U.S. Fish and Wildlife Service agreed to use the advanced “Unified Method” to remove Asian carp, from Lake Barkley and Kentucky Lake, using this method, they removed 47,000 Asian carp.

The “Unified Method,” which involves corralling Asian carp into one location using electronic technology and removing the fish from the water with specialized nets, this is a technique successfully used in controlling Asian Carp populations abroad, with the U.S. Geological Survey successfully deploying  this method for removing Asian carp in Missouri and Illinois.

Another control method used in 2016, were effort to reintroduce Alligator Gar between Tennessee and Illinois as part of an effort to control Asian carp.

According to National Wildlife Federation – Drew Youngedyke, “it’s not a state problem; it’s a national problem, which needs to be dealt with, and a funding problem.”

Youngedyke continued by saying, “what’s needed is federal funding as it has to be approached nationally and in order to bring attention to this issue, we, those that enjoy spending time on our waters need to contact our senators and representatives.

Letting them know it’s a Top priority for us, there constituents, the anglers, hunters and all who spend time on the water and that it should also be a priority item for them.”

After talking with Youngedyke, I contacted both the Nebraska Game & Parks and the South Dakota Game, Fish and Parks fisheries personnel to see what if anything is ongoing to control these fish.

Also, I talked with Tony Barada with the Nebraska Game & Parks fisheries division out of Lincoln about these invasive species.

He indicated that, ” The invasive species, the Silver and Bighead carp have spread not only up the Missouri River as far as Gavin’s Point Dam, but also into the Big and Little Nemaha, the Elkhorn and the Loup and the Platte south of Omaha out as far as Kearney.

The Game & Parks is currently talking with the public, to pattern and document the fish’s movements and has a program where they are studying the distribution of Silver and Bighead carp on the interior rivers and streams.

You can get control of some of the invasive species in a lake such as Lake Yankton by using the chemical Rotenone, which kills all species of fish.”

According to Barada, “these invasive species are so prolific, in order to stay even with their reproduction, you’d need to remove up to 90% of the fish’s population annually and as of today; there have been no means of doing this without destroying other fish.”

In South Dakota, I talked with Game, Fish & Parks Will Sayler, Pierre, the Fisheries Program Administrator for the state.

Will indicated, “In South Dakota, the Silver and Big Head carp are in the Missouri River and stopped from going farther upstream by Gavin’s Point dam. They’re in the Jim River and because there are no barriers, they’ve made their way up to the Jamestown Reservoir. They’re also in the Big Sioux and Vermillion River which have natural barriers preventing the fish from going farther upstream.”

As far as controls to keep the fish from advancing, the state discussed electric barriers, but because of the states water conductivity, they aren’t as reliable as they would like them to be. Piscicide, Fish Killer, Rotenone could be used where the fish are concentrated as it was in Lake Yankton during its renovation, which took care of the invasive fish in the lake, as well as all species of fish found there as its non-selective, having the potential to kill any fish exposed to it.”

All agree that Invasive species are a problem, which includes Zebra mussels that create their own set of problems, but in order to get to the root of this problem, it’s going to cost substantial dollars.

We, those of us who enjoy and use the water of our states, the anglers, boaters, skiers, jet skiers and others need to get vocal and contact our governors, representatives and senators to get the ball rolling on funding , letting them know just how big of a problem invasive species are!

If we don’t, the only ones to blame as this problem worsens are ourselves!