I’m not sure when Lindy came out with their Spin Rig, but I’m guessing sometime in the early to mid 1970s. But I became a fan of them right off the start. The Spin Rig is designed to present live bait, a minnow or chub or even a nightcrawler or leech. It came in many sizes. The smallest, I think was about an eighth ounce and the biggest a half ounce. At least those were the sizes I used the most. It was designed by Ron Lindner and was the perfect guide lure. All you had to do was troll it along a weedline or other structure and whatever gamefish was down there would hit it. I used to cast it across those big shallow reefs on Lake Vermilion in northeast Minnesota. I trolled it along weedlines on West Lake Okoboji. It traveled with me to nearly every fly-in in Manitoba and Ontario. It was a dynamite northern pike lure. It was so well-balanced you could cast it out and let it helicopter straight down to the bottom and then lift and drop it back to the boat. I used the big half ounce version tipped with a 6-inch plastic curly tail on Manitoba’s Cross Bay in 1979 to catch northerns pushing 20 pounds. That’s where I learned big northerns can’t stand a lure dropping below their level. They smashed it every time. And then Lindy discontinued the lure. I still had some in quarter, three-eighths and half-ounce size. So I decided to make my own molds. I used plaster of Paris and using the originals as a pattern, soon had three molds. I found suitable hooks at Morey Wheeler’s old Fisherman’s Factory Outlet in South Sioux. The hook had to be bent just right to make the lure work correctly. If you were careful (and lucky) you could pour quite a few out of each mold. I think it was about 10 years ago that I finally threw the last one away. I suppose the Spin Rig didn’t sell well because people were so used to spinnerbaits having rubber or plastic skirts. Lindy did sell one at the time called the Squirrel Spin, and I still have a couple of those in original packaging. They featured grey squirrel tail hair for a skirt. Of the three in the photo, one is an original Lindy. It’s the one at the lower left. The red and white one has a coating of epoxy over the paint to keep it from chipping. After probably 40 years, it has yellowed. But it will still catch fish. 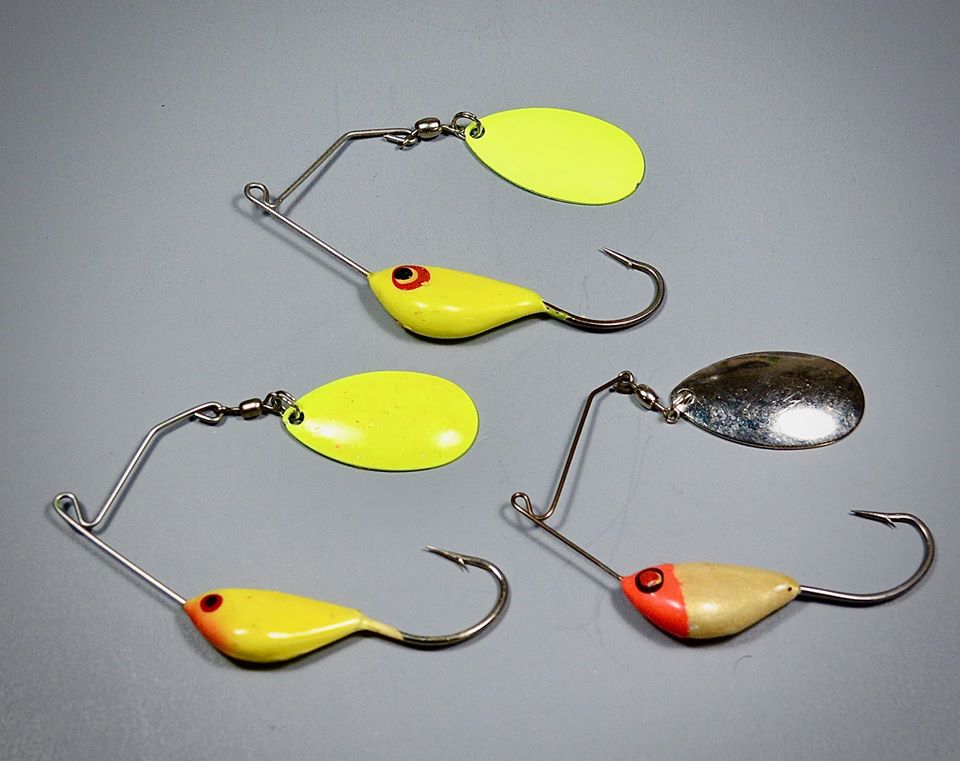